Aaron Rodgers was the only member of the 53-man roster to not participate in Packers practice to some degree. 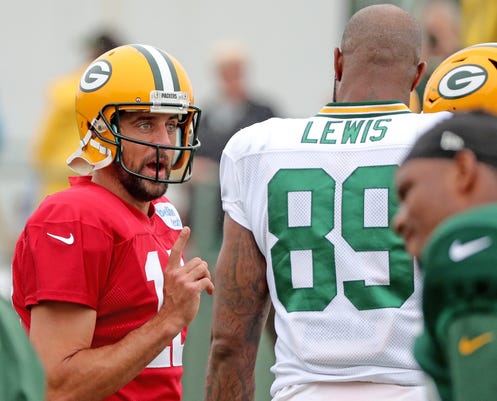 GREEN BAY - At the start of the week, Green Bay Packers coach Mike McCarthy was hopeful Aaron Rodgers could practice Tuesday as he continues to manage the left knee injury he suffered in Week 1. But Rodgers was not able to go.

He was the only member of the 53-man roster to not participate to some degree Tuesday.

The Packers typically practice three times per week: Wednesday, Thursday (pads) and Saturday. But with the upcoming trip to Los Angeles, McCarthy moved the practice schedule up a day. So Tuesday was actually "Wednesday" on the team schedule.

The quarterback is also hoping that he is getting closer to having his protective knee brace come off sooner rather than later.

"If I’m completely healed I don’t need to wear a brace," Rodgers said. "Feel more comfortable without it obviously. Having dealt with a knee injury for much of my football life, obviously you’re more protected. You see some guys who do wear it all the time without having issues, but I just feel more comfortable without having it on. So if it’s not on that means I’m feeling great and if it is, that means I’m not quite all the way back."

Cobb, Allison back in action

Starting wide receivers Randall Cobb and Geronimo Allison returned to practice in a fuller capacity Tuesday, the first time they were able to rejoin Davante Adams since the week of Sept. 16 and the run up to Week 3 in Washington.

Cobb injured his hamstring in practice the next week and has missed the last three games. Allison suffered a concussion against Buffalo and left the game early Sept. 30 and has also been nursing a hamstring injury.

"Coming off of this one, having some of the injuries we did, especially in the wideout room, getting those guys back, giving them a little bit extra time to rest is going to be key, especially because with G-Mo and Cobb, it’s two guys that we definitely need moving forward to win these games," Adams said. "Yeah, get our legs back, refresh our mind and kind of hit that reset button little."

Rookie cornerback Jaire Alexander (groin) also increased his practice workload. He has not played since leaving the Buffalo game early as well.

An undrafted free agent out of Duke in 2016, Lucas Patrick has continued his development as a reliable member of the Packers' offensive line room.

After making two starts at guard due to injury in 2017, Patrick has worked in at right guard behind Justin McCray and Byron Bell – or been first man up when Bell has had to fill in at right tackle. Patrick has now played 22 offensive snaps this season in spot duty against Washington and San Francisco.

“Those reps were crucial for me,” Patrick said. “Just because of, sometimes (with) a small sample size, I really have to capitalize on every single one. Whether it be at any position on the line where I need to go in and fill in for a guy if he needs some extra tape on the sideline or finish out a game, but it’s something I’ve mentally prepared for.”

McCarthy said you can judge the success of a backup lineman coming on in relief by how much the offense has to change – or not – to accommodate for him. Against San Francisco, Patrick noted how the Packers came out of the half with a field goal with him on the field was an important step for him in that regard.

“The more times I do it the more I feel like I’m getting better at it and being able to fill in and there not be a drop off,” Patrick said. “It helped my confidence on that drive that I went in, we ended up scoring and Byron came right back in. If I can go in there seamlessly, whether Byron comes back in, or Justin, or whoever it is, it’s a seamless transition, then I feel like I’ve prepared well.”