Silverstein: Green Bay Packers must prove they can hold their own against NFL's elite

The most important part of the next two games isn’t that the Packers win, it’s that they give the two conference powerhouses all they can handle.

Silverstein: Green Bay Packers must prove they can hold their own against NFL's elite 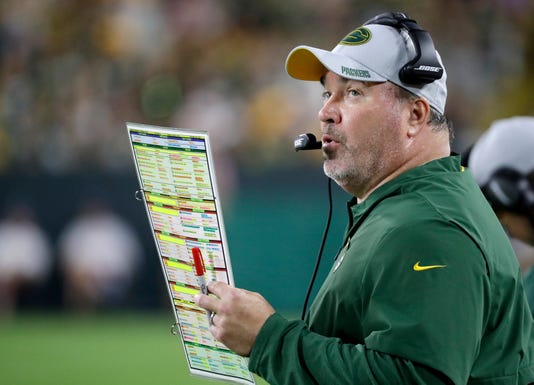 GREEN BAY – By the time the Green Bay Packers complete their five-game whip around the country they will have done more than elevated themselves to platinum frequent-flyer status.

They will have declared their intentions for 2018.

This journey, which started with a flight Friday afternoon to Los Angeles for a Sunday afternoon game against the Los Angeles Rams, bounces them around time zones like they’re long-distance cellular signals.

With a home game sandwiched between a pair of two-game road trips, their next five games will kick off at, in order, Pacific time, Eastern time, Central time, Pacific time and Central time.

There will be four plane rides home during that span, all of them overnight flights that will land at Austin Straubel Airport somewhere between 1:30 a.m. and 6 a.m.. And just to make things interesting, a switchover to daylight savings time will take place while they’re in their beds in another time zone.

This stretch of games stands out as the most difficult a Mike McCarthy team has faced both because of the travel and the quality of opponent it will be facing – the combined winning percentage of the Rams (7-0), New England (5-2), Miami (4-4), Seattle (3-3) and Minnesota (4-2-1) is .671.

But with all of that looming, no one is saying McCarthy needs to come out of that gauntlet 5-0.

In fact, it wouldn’t be fatal for the Packers to lose their next two games and hit the halfway mark 3-4-1. McCarthy’s teams typically play better later in the season, and at the same time the Packers are playing four straight non-division opponents, the rest of the NFC North will be beating up on each other.

SILVERSTEIN: Who's to blame for neglecting run game?

The most important part of the next two games isn’t that the Packers pull off major upsets, it’s that they give the two conference powerhouses all they can handle. It’s that they start building some capital for the final three games of that five-game stretch and a favorable December schedule.

If the Packers get blown out against the Rams, the team is going to splinter. There have already been signs of it with quarterback Aaron Rodgers’ veiled shots at McCarthy after the Bills game, safety Ha Ha Clinton-Dix’s declaration he’ll be playing somewhere else next season and rumblings about why running back Aaron Jones isn’t being used more.

If you go back to 2010, the year McCarthy won his only Super Bowl, the Packers sustained a huge blow to their season when Rodgers suffered a concussion and the team got blown out in Detroit. With their playoff chances dwindling in what looked to be a promising season, the Packers went into New England with Matt Flynn as their quarterback.

McCarthy started the game with an onside kick, which the Packers recovered. The defense challenged the Patriots receivers at the line of scrimmage and had Tom Brady frustrated. If not for a horrendous special teams gaffe, the game might have gone in the Packers’ favor.

The loss dropped the Packers to 8-6, but it turned into a validation that the team could compete with anybody and it led to a late-season rally and run through the playoffs that saw the Packers become the best team in the NFL. Everything came together when the chances of it falling apart looked so likely.

If the Packers get blown out against the Rams, McCarthy is going to have to pull off a miracle to keep this team afloat. Maybe there’s a repeat waiting to happen when the Packers face the Patriots on Nov. 4, but it would be best not to chance it.

McCarthy has been extremely good at refocusing his team after a bye. The Packers are 9-3 under him coming out of the bye and have some signature post-bye victories, including big division blowout wins vs. Chicago in 2014 and at Minnesota in ‘10, as well as a season-changing victory at Miami in ’06.

The Packers have some things going for them going into this game.

The bye week allowed them to get healthy. Receivers Randall Cobb and Geronimo Allison should play. Their return could allow McCarthy to get back to some of the no-huddle offense that he has had to abandon first because of Rodgers’ knee injury and then because he was playing with rookie wide receivers.

The best thing that happened during that stretch is that two of those rookies, Marquez Valdes-Scantling and Equanimeous St. Brown, received valuable snaps and made enough plays that McCarthy can sneak them in anytime he wants without hesitation.

On defense, first-round cornerback Jaire Alexander appears ready to return from a hamstring injury, which could be a huge plus given he’s the only one in the secondary who can run with Rams receivers Brandin Cooks and Robert Woods. He was starting to play like a first-round pick when he got hurt.

In the meantime, fellow rookie Josh Jackson played a ton of snaps and didn’t appear overwhelmed as many rookie cornerbacks are. The team also added veteran cornerback Bashaud Breeland, who may get his first action this weekend, and athletic rookie inside linebacker Oren Burks is getting more and more snaps.

But for all those positives, one can’t ignore what happened in the first six games. Rodgers isn’t himself and it isn’t clear whether that’s because of the injury he suffered in Week 1, discord between him and McCarthy over how the offense should be run or general decline.

McCarthy has abandoned the run game and been negligent with Jones, the second-most dangerous skill player on offense behind receiver Davante Adams. If he wants to get to the kind of play-action game that the Rams are so good at, he must present the defense with a running threat.

Rodgers is complicit in ignoring the run game and needs to stop taking the pass option every time it’s there and let Jones or Jamaal Williams pound the ball.

McCarthy and Rodgers have been short-sighted in not running the ball even in those games when the Packers were behind by more than one score. If you have no run game and refuse to use it when you’re behind, you’re destined to never run it and never have a play-action game.

There is more at stake Sunday than just the run game. Defense and special teams better start winning more downs than they’re losing.

It has been said in this column that this team is set up for reigniting into the upper echelon of the NFL in 2019 because general manager Brian Gutekunst’s first draft has a chance to be outstanding, his next draft now includes two first-round picks and his freedom to sign free agents won’t be encumbered by a lack of cap space.

But as foreign a thought as it might be for McCarthy, someone else could be the one inheriting that opportunity if the Packers collapse during this five-game stretch. If his team is still playing like it did the first six weeks of the season, his future could be in doubt.

For now, the most important thing is making the Rams feel like they’ve just played one of the best teams in the NFL. Nothing else matters.