Welcome to your game-day Morning Buzz, rounding up news and views regarding the Green Bay Packers from around the web. 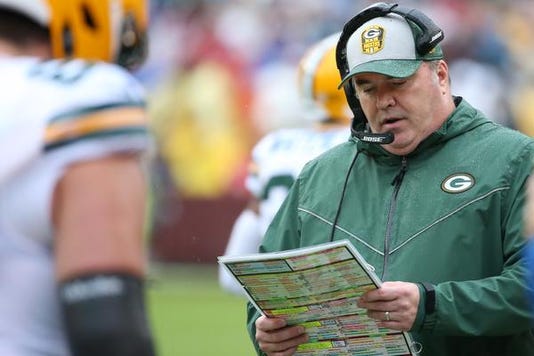 Welcome to your game-day Morning Buzz, rounding up news and views regarding the Green Bay Packers from around the web and here at PackersNews.com.

We'll start with Tom Silverstein's column about how important it is that the Packers at least be competitive in their next two games against elite opponents and how dire the consequences could be if they get blown out Sunday by the Rams and aren't competitive during this five-game stretch.

McCarthy and Rodgers have been short-sighted in not running the ball even in those games when the Packers were behind by more than one score. If you have no run game and refuse to use it when you’re behind, you’re destined to never run it and never have a play-action game.

There is more at stake Sunday than just the run game. Defense and special teams better start winning more downs than they’re losing.

It has been said in this column that this team is set up for reigniting into the upper echelon of the NFL in 2019 because general manager Brian Gutekunst’s first draft has a chance to be outstanding, his next draft now includes two first-round picks and his freedom to sign free agents won’t be encumbered by a lack of cap space.

But as foreign a thought as it might be for McCarthy, someone else could be the one inheriting that opportunity if the Packers collapse during this five-game stretch. If his team is still playing like it did the first six weeks of the season, his future could be in doubt.

You can read the whole column here:

In the next two games, the Packers have to give the two conference powerhouses all they can handle. https://t.co/SXXaHHY3cr

Silverstein looks at keys to a possible upset in our Packers Podcast:

Here are some keys to a potential upset. https://t.co/64NN7R7bbp

Pete Dougherty writes about the different paths the Packers and Rams are traveling:

The Packers went Brett Favre to Aaron Rodgers, while the Rams failed to find a keeper after Kurt Warner’s departure in ’04. https://t.co/osOpEp6mlx

Silverstein presents his weekly "5 Things to Watch," along with our experts' predictions:

Packers vs. Rams preview: The #Packers are definitely the underdog here. Can they pull off a win? https://t.co/5lvl88YnK0

Silverstein and Olivia Reiner break out the iPad to examine the Rams' play-action offense:

We've heard all about the #Rams play-action, but there's a lot more to it than the fake run.@TomSilverstein and I broke out the iPad and analyzed an example of their offense at each position of the play.

For some interesting off-the-field Packers takes, check out Jim Owczarski on Snapchat:

The #Packers — and therefore your @ @PGPackersNews & @js_packers coverage team — are on the coast. For some non-football (& behind the scenes football) looks at this trip, follow here! ⬇️ pic.twitter.com/ofljC7fSYK

Ha Ha Clinton-Dix, Demaryius Thomas, Janoris Jenkins, Tyrod Taylor and more Raiders are among the hot names on the market as we approach the NFL trade deadline (by @AlbertBreer) https://t.co/loNJNoqHNT

Aaron Rodgers talks to NBC's Mike Tirico about his growing friendship with Brett Favre and also about the immediate aftermath of his knee injury in the season opener:

"I was worried it was significant because I was in a great deal of pain," Rodgers said of his Week 1 injury. https://t.co/QzJXlmZ1SR

Ndamukong Suh says he doesn't know whether Rodgers likes him:

Rams cornerback Sam Shields talks about his concussions and being released by the Packers in The Players' Tribune:

Sam Shields reflects on pain of being released by Packers https://t.co/aHJxRVMa3z

A bit of a surprise from The MMQB experts on the Packers-Rams game:

Here are our Week 8 picks against the spread: https://t.co/g064ZbwOZC

Rob Demovsky of ESPN writes about the unfortunate injury that has kept Jake Kumerow sidelined:

No regrets, but still no game action for Packers' Jake Kumerow https://t.co/wN3KacuYhJ

5 under-the-radar Packers in need of big game vs. Rams https://t.co/2zyrQwsXzV

Acme Packing Co. shows how Mike Daniels is contributing without it showing up on the stat sheet:

Where has Mike Daniels been? @farminvt looks at the tape and finds Diesel everywhere but the stat sheet https://t.co/h4rZoDNSPV