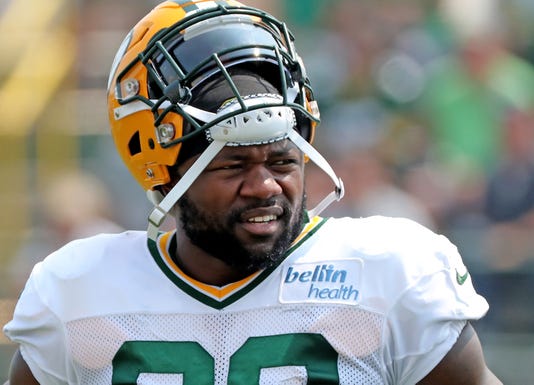 GREEN BAY – Ty Montgomery came to work on Monday with more questions than answers, and the 25-year-old wasn’t feeling good about where those questions were taking his mind in the aftermath of a 29-27 Green Bay Packers loss to the Los Angeles Rams.

"I’m walking around with a mindset that I’m not supposed to have," he said at his locker at Lambeau Field.

But to understand where Montgomery's mind was Monday, you had to go back 24 hours to the immediate aftermath of the Packers’ loss at L.A. Memorial Coliseum on Sunday. At that time, there were two primary questions for Montgomery: Was he told to take a knee in the end zone after the Rams took the lead with 2 minutes, 5 seconds to go? And if so, why did he return it?

Montgomery elected to not speak postgame, leaving coaches and teammates to speak about that decision and its ramifications, which were a fumble and Aaron Rodgers and the offense stuck on the bench to watch time expire.

Head coach Mike McCarthy simply stated the discussion prior to the kickoff was to down the ball and give the offense two minutes to move into field goal range. McCarthy admitted he didn't know how close the ball was to the goal line. On the record, teammates were frustrated the offense wasn't afforded that last chance to win.

But at nearly 3 a.m. on Monday, the NFL Network reported that an anonymous teammate questioned Montgomery’s character in returning the kick. 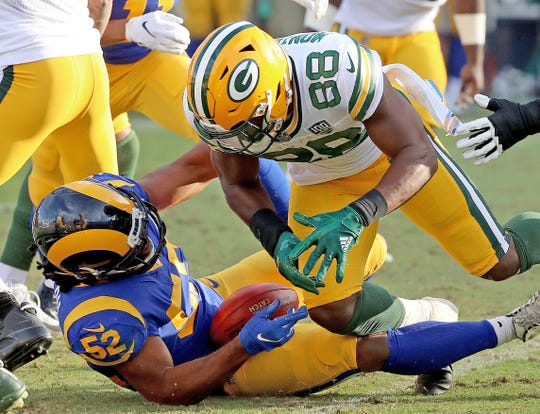 Green Bay Packers running back Ty Montgomery (88) fumbles the ball on a kickoff return late in the game into the lap of linebacker Ramik Wilson (52) against the LA Rams Sunday, October 28, 2018 at the Memorial Coliseum in Los Angeles. (Photo: Jim Matthews/USA TODAY NETWORK-Wis)

The league-owned site reported that six Packers coaches and players had said Montgomery was frustrated when he came off the field for a second-down play with about six minutes left in the game, categorizing his actions as a “tantrum” when he slammed his helmet on the sideline.

One anonymous player then made the correlation that Montgomery’s display coming off the field meant he willfully went against McCarthy’s order to take a knee in order to serve his own interest.

Just before 4 p.m. Monday, Montgomery met with the media and tried to process it all.

“We talk about being brothers,” he said. “We talk about being family and keeping things in-house, in-house, this, that and the other. That’s not what happened. I don’t know. Maybe that’s what they do in their family. That’s not what I do in mine. No one ever said anything to me. No one ever came to me. So I’m thoroughly disappointed in the speculation and just the backlash I have to deal with now. Because now, we’re talking about my character. We’re not even talking about the fumble anymore, we’re talking about my character. We’re talking about the reasons why I did what I did, and I’m not OK with that.”

As for his decision to take the ball out on the kick return, he acknowledged the return unit had its usual conversation — “if it’s in the end zone, keep it in the end zone” — but Montgomery was vehement that he did not flout any directive.

“At that point in time, I stood where I always stood, I had a returnable ball,” he said. “So I made a split-second decision, I don’t know if this is going to land on the goal line. So I’m not going to take a knee on the goal line, at the half-yard line and take a chance at putting the game in the ref's hands. Unfortunately, I ended up fumbling the football. I don’t think we’d be having this conversation if I didn’t fumble the football because we know how good our two-minute offense is.

He also admitted to being frustrated after being pulled in favor of Aaron Jones for a second-down play with 6:45 to go, equating it to going into another room and releasing a scream. Montgomery acknowledged that moment was the culmination of some pent-up emotions.

“I got a little frustrated. I wanted to make a play,” he said. “I wasn’t playing very much and I wasn’t able to make a play and I was frustrated about that. I don’t fully understand what my role is right now, what I’m supposed to be doing, how I’m supposed to help this team. And it’s frustrating when I want to help the team and I get limited opportunities and it didn’t happen on that play. So I came off frustrated about it.”

But Montgomery said that had no bearing on his decision-making process on the kick return.

“Absolutely not, and that’s the point that I was trying to make,” he said. “And it’s very…”

“I’m very disappointed in the fact that was said and they tried to make correlations that don’t exist.”

Montgomery admitted he began wondering who the anonymous teammate was, what his motivations were and if he was trying to convince others of his point of view. He said no one had yet come to him directly and claimed the quote, and he couldn’t hide the fact he was disappointed in that teammate.

“One hundred percent. Very disappointed,” he said. “There’s a lot of stuff that’s not true that’s causing me to have to deal with false accusations about my character, perceptions about my character. I’ve never been one to throw teammates under the bus. You guys know if you guys ever ask me questions about teammates, I always deflect it. I don’t like it. So it’s very disappointing especially as a guy who’s jeopardized the length of his career, the amount of money he can make in his career, in the middle of a season being asked to do multiple things all the time. That’s all I’m going to say about that.”

Tramon Williams was one teammate who spoke to Montgomery on Sunday night, lending important support.

“I’ll tell you what, the people who said that, it’s unfortunate that they said that,” said Williams, a veteran of 12 seasons and three teams — including the 2015 and '16 Cleveland Browns that went a combined 4-28. “That’s the reason they are anonymous and not said their name. If they want to say it, put their name by it. That’s them. Whoever that is, it is what it is. But we’re going to have Ty’s back. I know for a fact he didn’t do it selfishly. It may look that way, but he didn’t do it selfishly.”

“It is frustrating because we’re a team,” Jones said. “We should be able to come talk to each other. That’s why that is frustrating. Of course you want to know who is saying what. We’re teammates and we’ve got to stick together at the end of the day.”

After an off-day Tuesday, the Packers will move on toward game planning for the New England Patriots. Montgomery expects to be a part of it and said he will continue to do what he’s asked to do, as he always has.

But the wound may take time to heal.

“I’m thoroughly pissed off at the state of humanity right now. That’s all I can really say about that.”

INSIDER: Thumbs up to defense, down to special teams