Ty Montgomery was traded Tuesday to the Baltimore Ravens. 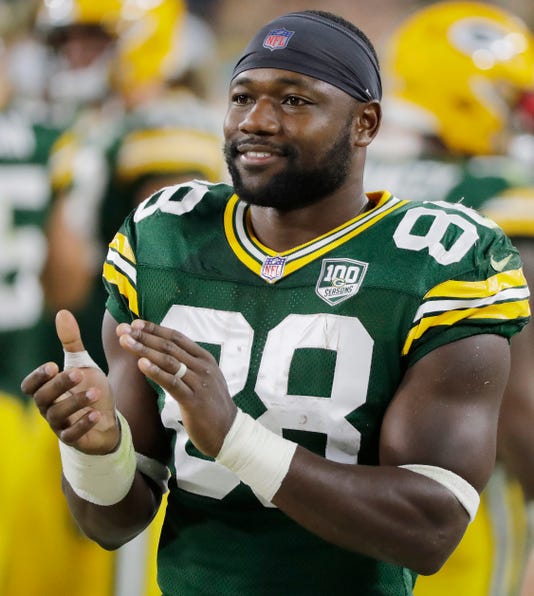 GREEN BAY -- Less than 24 hours after Ty Montgomery said he had a hard time trusting his teammates and didn’t know his role on the team, the Green Bay Packers alleviated that concern Tuesday by moving the running back to the Baltimore Ravens for a 2020 seventh-round draft pick.

Following a fumble on a kick return late in Sunday’s 29-27  loss to the Los Angeles Rams, an anonymous teammate questioned Montgomery’s intentions for bringing the ball out of the end zone.

On Monday, Montgomery denied purposefully disobeying a directive to down the ball in the end zone, and he denied any frustration over his role in the offense led to that decision. He then wondered about the intent of his anonymous teammate.

Drafted as a wide receiver out of Stanford in the third round in 2015, Montgomery has run the ball, caught passes and returned kicks in his 36 career games. He caught 129 passes for 827 yards and three scores, rushed for 849 yards and seven touchdowns and averaged 22.7 yards per kick return.

With the return of Aaron Jones from suspension in Week 3, and Jones’ continued success since, Montgomery’s role on the offense has diminished.

Montgomery, 25, will be an unrestricted free agent at the end of this season.

Montgomery was scheduled to host a fundraiser at Lambeau Field on Thursday for his My 10 Percent charity to help teens in foster programs. His representatives say the event is postponed. No new date is set.

The trade also essentially wipes away the 2015 draft class for the Packers: