News and notes from the Packers practice and locker room Thursday. 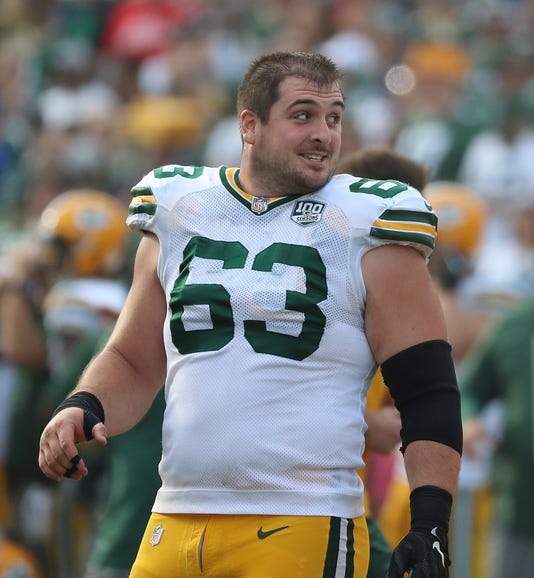 GREEN BAY - Center Corey Linsley was the only Green Bay Packers player who didn’t participate in Thursday’s padded practice, but he made it clear his availability this week is not in question.

Linsley, listed as limited with a knee injury, said he will be a full participant in Saturday’s walkthrough, and that he will play Sunday night in New England.

“It was just soreness,” Linsley said. “Just took a little time to get warmed up.”

Otherwise, the Packers continue to be the picture of health. Outside linebacker Nick Perry (ankle) and safety Jermaine Whitehead (back) practiced Thursday after being held out Wednesday.

Aaron Rodgers isn’t asking Equanimeous St. Brown what route he wants to run just yet, but the sixth-round pick out of Notre Dame is making the most of his opportunities the last few weeks. Active the last three games, he has caught six of eight targets for 139 yards — a 23.2 yards per catch average. With starters Randall Cobb and Geronimo Allison missing games against Detroit and San Francisco, St. Brown played 60 and 35 snaps, respectively.

And even with Cobb and Allison returning against Los Angeles and fellow rookie Marquez Valdes-Scantling earning enough trust to tell Rodgers which route he wanted to run on a touchdown pass, St. Brown was still on the active roster and played six snaps, catching two passes.

“It feels good that they’re not just playing me when they need to, they play me because they want to,” St. Brown said. “I feel like the confidence came in (Detroit) where I played a lot, (San Francisco) too, but I feel like I’ve been building confidence in practice and you gotta show it in the game, and then once it translates to the field, then you know you’re set for the season, you know you can do it. It’s just a matter of doing it every time you get a chance.”

Early Wednesday morning, Packers general manager Brian Gutekunst said he didn’t like having just two running backs on the active roster after the trade of Ty Montgomery. Hours later, the team pulled Tra Carson up from the practice squad.

They told the 26-year-old just before the session.

“Honestly I didn’t know — you just never know with this business,” Carson said. “I’m just coming here, going to work every day, trying to do what I can do.

“It’s a blessed situation. I’ve come a long way, a long road to this. It is what is — I’m just happy to be here, happy to play.”

Signed Oct. 9 after he was released by the Cincinnati Bengals, Carson feels he can contribute if needed Sunday in New England. An undrafted free agent out of Texas A&M in 2016, Carson spent most of that season on the Bengals' practice squad. He was promoted to the 53-man roster two days before the 2016 regular-season finale but was not active for that game.

He spent all of 2017 on injured reserve and then headed back to IR again at the start of this season with a hamstring injury. The Bengals released him Sept. 28.

A bigger running back at 228 pounds, Carson has shown flashes each of the last three preseasons in Cincinnati rushing for 85 yards in 2016, 60 yards in 2017 and 77 yards this year. He hasn’t been healthy enough to play in a regular-season game since Jan. 1, 2017, however.

It’s been a long wait.