If the Green Bay Packers were going to beat the New England Patriots on Sunday night, they needed Aaron Rodgers to out-duel Tom Brady. 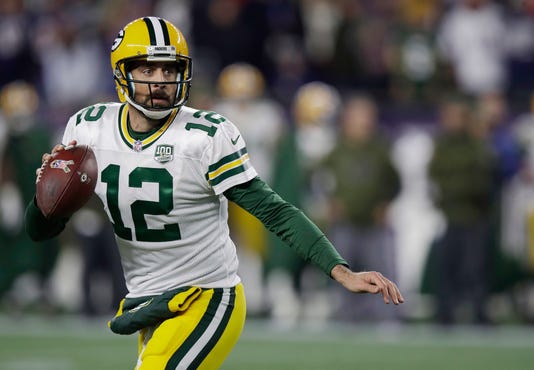 If the Green Bay Packers were going to beat the New England Patriots on Sunday night, they needed Aaron Rodgers to out-duel Tom Brady.

It really is that simple.

Both quarterbacks have carried their franchises for years, but this year’s Packers especially need Rodgers to play at an MVP level if they’re going to beat one the best teams in the league.

The reason he and Brady are considered the two best quarterbacks in the league is precisely that. They’ve proven capable of playing at that level not just for a game here or there, but for weeks and even seasons at a time.

But Sunday night’s anticlimactic showdown, a 31-17 Packers loss, was representative of Rodgers’ and his team’s season to date. There were flashes of brilliance, but they were too infrequent for the Packers to defeat Brady even when the Patriots were undermanned with tight end Rob Gronkowski and running back Sony Michel late scratches because of injuries.

In this game, as at other times this season, Rodgers’ accuracy and zip on the ball were not up to his historical standards.

Rodgers’ left knee injury, sustained in the season opener, has to some degree been a factor through the first half of this year. He hasn’t been able to plant his lead foot and step into throws as he normally does, though it’s also true that when healthy he’s made a career of delivering difficult throws when his feet aren’t set. Sunday he also appeared not to play with a knee brace for the first time since he was injured in the opener.

Regardless, one of the things that has separated Rodgers from other quarterbacks is his pinpoint throwing, and he just hasn’t been as accurate this season. We saw an example early on Sunday night, on the Packers’ first drive of the game.

Rodgers had led a drive deep into Patriots territory and faced third-and-goal from New England’s 14. Coach Mike McCarthy called a receiver screen to Randall Cobb, and reviewing the game tape, the play started with promise.

However, Rodgers’ throw was low and behind Cobb. Cobb caught it but had to reverse pivot to turn upfield, and by the time he got going the play was all but dead because defensive end Adrian Clayborn had pursued from behind and blown up the play.

If Rodgers’ throw had hit Cobb in the chest, though, the play might have gone for a touchdown. The Patriots had four defenders between Cobb and the goal line, but the Packers had five blockers. With a better throw, Cobb could have headed upfield immediately, which would have taken Clayborn out of the play. With five blockers leading the way, Cobb very well might have been able to make his way into the end zone.

Instead, the play died, and the drive ended with a field goal instead of a touchdown on a night when the Packers needed touchdowns.

Similarly, late in the first quarter, rookie receiver Marquez Valdes-Scantling had a step on cornerback Jason McCourty on a go route that was open for a possible 44-yard touchdown. But Rodgers slightly underthrew the pass, which traveled about 32 yards in the air, and McCourty was able to challenge the catch.

Judging by the replay, you could give Valdes-Scantling a drop on the play – he got both hands on the ball. But he had to slow down and turn his body to do it, and McCourty was right there to shove Valdes-Scantling to the ground just after the ball hit the receiver’s hands.

It wasn’t a bad pass, but it was underthrown. If it had been pinpoint and hit Valdes-Scantling in stride, it would have been a big play and possibly even a touchdown.

Even on Rodgers’ pass to Davante Adams early in the third quarter that was ruled a catch but then overturned on replay, Rodgers’ didn’t have the zip he has when he really steps into a throw. Taking it as a given that he wanted to keep the ball low on the sideline throw, it still was a little short.

Those are only three plays, but they’re the kinds of throws that Rodgers usually hits. That’s what separates him and Brady from other quarterbacks in the league. Maybe they’ll miss one of those throws a game. But not all three.

Rodgers’ modest 89.2 rating Sunday night just about summed up his day. He didn’t turn the ball over but even with a 51-yard completion to Valdes-Scantling averaged only 6.0 yards an attempt, which is nearly two full yards less than his 7.9-yard career average. He was under pressure much of the game (New England was credited with six quarterback hits) and completed only 55.8 percent of his passes (24-for-43). That’s almost 10 points below his career average of 64.8 percent.

While Brady wasn’t exactly on fire (99.0 rating), he also didn’t turn the ball over and was just enough better than his counterpart to win.

If this game was an indication, the Packers aren’t any worse off with Tramon Williams at safety than they were with recently traded Ha Ha Clinton-Dix.

The 35-year-old Williams, a career-long cornerback, started and played every snap at safety against New England. He looked like he was sound in coverage in his new role, and his cornerback skills make him better than Clinton-Dix at playing the ball in the air.

The difference showed on the game’s third play. The Patriots clearly wanted to test the Packers’ safeties early after watching their troubles on deep balls through the first half of the season, and with a new starter there as well. But when Brady ran play action and tried to hit Josh Gordon deep, Williams not only was there in double coverage but actually had a step on the receiver. He basically cut off Gordan as they got downfield and the overthrow harmless hit the ground.

Williams’ issues are going to be tackling, which we also saw Sunday. Though he made a touchdown-saving tackle in the open field on James White on a first-and-goal from the 2 in the fourth quarter, Williams also missed a big open-field tackle on Gordon’s 55-yard touchdown with about 7 ½ minutes left that put the game away.

Clinton-Dix (6-1 and 208 pounds) is much bigger and more physical than Williams (5-11 and 191), though Clinton-Dix had his tackling issues as well, such as when Detroit receiver Kenny Golladay stiff-armed him to the ground on a big play earlier this year.

Either way, the early signs suggest there won’t be a dropoff with Williams replacing Clinton-Dix.

» At this point, third-year pro Kyler Fackrell is playing better than Nick Perry at outside linebacker. Perry has been on the injury report the last few weeks because of an ankle injury, and Monday, coach Mike McCarthy said Perry still is having problems with the ankle on which he had surgery last offseason. Something must be going on, because Perry has been invisible in recent weeks. He has only 1½ sacks through eight games and had only one tackle in 29 snaps Sunday night. Fackrell actually played more snaps (36) and deservedly so. He was the more active of the two.

» Antonio Morrison, a backup inside linebacker, is one of the Packers’ most physical defensive playersbut missed a chance to make a huge play on the goal line on a third-and-1 early in the fourth quarter. The Packers already had made a goal-line stand earlier in the game, and on third-and-goal from the 1 this time the Patriots gave the ball to James White, who ran off guard to his left. Morrison slid that way but overpursued by a gap, which gave White a cutback lane into the end zone. If Morrison had stayed home he would have had a good shot at stopping White and forcing fourth down.

INSIDER: Thumbs up to MVS, down to silly mistakes