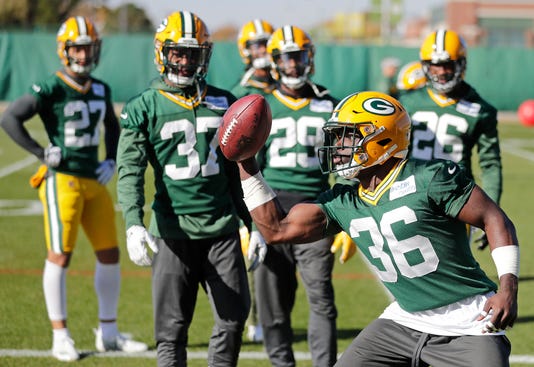 GREEN BAY – Kentrell Brice shook his head. For the second time in two weeks, the front office shook up the safety room for the Green Bay Packers, releasing Jermaine Whitehead on Tuesday a week after trading Ha Ha Clinton-Dix.

“I control what I can control, keep playing ball, both my dogs gone,” Brice said. “I’m the lone soldier left.”

He then waved his hands along the row of lockers of secondary players. Three years and 30 games into his NFL career, Brice is now the most experienced player at that position.

Whitehead had played 41.7 percent of the defensive snaps through last week, even though he missed one game. He was a part of defensive coordinator Mike Pettine’s game plans every week, often being used as a dime linebacker.

Through eight games, Pettine has rolled out 205 unique personnel groupings (15th most in the league) and eight unique defensive starting lineups (tied for second most). But of the three lineups he has used the most this year, all have included Clinton-Dix and Whitehead.

RELATED: Why Packers moved on from Jermaine Whitehead

PODCAST: What to make of Packers after latest loss

How he adjusts going forward will be revealed starting Sunday against Miami.

“You just gotta be versatile, honestly,” Brice said. “You gotta know the defense, know what you can do, know your abilities, know your strengths and weaknesses and play to that.”

To add depth at the safety spot, the Packers signed Ibraheim Campbell to go with Raven Greene.

To counteract the trading of Clinton-Dix against New England, Pettine rotated Tramon Williams out of the outside cornerback position to safety.

“l like to see myself, I’m athletic,” Jones said. “I can do whatever any safety in this league can do, man. I feel strongly about that. God has blessed me with that ability to play deep, and I have the range, speed to do anything you ask me to do on the field. And I’m pretty sure a lot of people understand that. It’s just a matter of doing it and being focused.”

The Packers will have to account for the loss of corner Kevin King to a hamstring injury. That could mean Williams is moved back to corner or plays a hybrid role. Or perhaps Josh Jackson (6 feet, 196 pounds) or Bashaud Breeland (5-11, 195) see more work around the line of scrimmage or back deep.

RELATED: Packers have thin margin for error on offense

Tony Brown has seen some reps on defense, and Will Redmond was promoted off the practice squad to add some depth to the corner position.

Jackson said safety is the only spot he hasn’t played yet in the secondary, but he and Breeland are prepared to if called upon.

Added Jackson: “I think I’m versatile enough pretty much any position. Wherever (Pettine) needs me, shoot, I can play. I can play the dime position. Just practice everything, everywhere, so I know for me I’ve got to know every position for real, so I’ve got to learn safety, dime, nickel, corner. It’s just understanding the playbook and being ready whenever you’re needed.”

Unlike a week ago when the Packers were trying to mold together a new secondary in advance of playing New England on the road, they get to face backup Miami quarterback Brock Osweiler at home. The Dolphins are 2-2 in his four starts in relief of an injured Ryan Tannehill, and Osweiler is completing 63 percent of his passes for a rating of 88.4. He has thrown for five touchdowns – but none the last two weeks – and has thrown three interceptions.

“We’ve got some moving parts in the secondary with the injury to Kevin and just the versatility you approach every new offense with and this is a unique challenge,” Packers head coach Mike McCarthy said. “We’re playing a football team that we haven’t played in four years and there’s personnel matchups that clearly were nonexistent four years ago, so there’s a lot of newness so we’ve got a lot of work to do.”