The Packers’ return to practice revealed surprises and the return of an injured player they hope can make a difference this season. 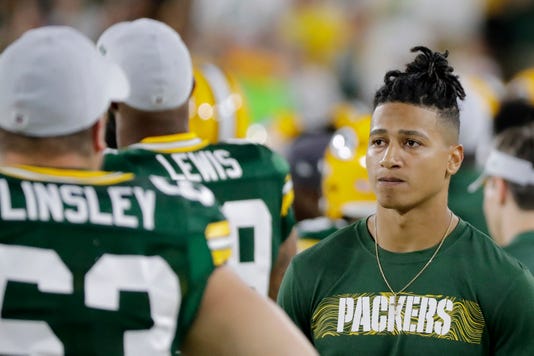 GREEN BAY – The Green Bay Packers’ return to practice Wednesday revealed some surprises and the return of an injured player they hope can make a difference in the second half of the season.

Taking part in practice were tackle Bryan Bulaga (knee), linebacker Blake Martinez (ankle) and safety Kentrell Brice (knee), all of whom had been knocked out of the New England game for at least a short while. Each of the three was listed as a limited participant.

Martinez might have been the biggest surprise given the degree to which he rolled his left ankle after stepping on quarterback Tom Brady’s foot. Martinez returned to the game eventually, but coach Mike McCarthy said Martinez was battling a lot of swelling Monday.

Cornerback Kevin King (hamstring) was the only player injured in the Patriots game who did not return to practice. Tight end Jimmy Graham (knee) sat out as he has done most Wednesdays to make sure he’s fully recovered for the next game.

Meanwhile, the Packers officially started the clock on the likely return of receiver/returner Trevor Davis from injured reserve. By practicing Davis, the Packers have used one of their two “designated-to-return” options for players who were put on injured reserve during the regular season.

The Packers could have practiced Davis last week, but they weren't sure if they were going to bring him back. When receiver Geronimo Allison was put on injured reserve after undergoing core muscle surgery Tuesday, the Packers decided to get Davis ready.

“I feel great,” said Davis, who injured his hamstring on Aug. 2, missed the bulk of training camp and then pulled it again Sept. 9 while getting ready for the season opener. “The trainers worked a lot on me to try and figure out what the triggers were to make me have repeated hamstrings (injuries).

RELATED: Packers have thin margin for error on offense

“Learning that and strengthening certain muscle groups just to help out my hamstrings as well.”

The Packers shopped Davis around the NFL before cutdown day but found no takers. Now, they need his explosive return ability to help them turn their season around.

Rodgers was asked if he had a motivational message similar to his 2014 ‘R-E-L-A-X’ comment at midseason when the Packers were struggling.

“Well, you asked a question so it’s not authentic and those two were authentic responses to questions,” Rodgers said to the reporter. “So when prompted I just feel like we have to play better, consistently, 60 minutes, try to eliminate some of the lows we’ve been having.

“We have to play with confidence and play up to the level we’re capable of playing.”

When Ted Thompson was general manager, it was rare for him to make a trade or cut someone who was playing a considerable amount in the regular season.

RELATED: Why Packers moved on from Jermaine Whitehead

PODCAST: What to make of Packers after latest loss

Gutekunst has control of the 53-man roster and is not waiting until the offseason to try to improve it.

“I think clearly the pattern and the emphasis of what’s going on currently with our personnel department, I think the direction Brian is, his imprint on the football team, is something of, there’s been change, particularly just the last two weeks," McCarthy said. "So, it’s usually never just one thing. It’s a combination of things, so this is a decision that’s been made and there’s new opportunity for other players."

Whitehead wasn't out of a job long, getting claimed Wednesday by the Cleveland Browns.

Osweiler is 2-2 this season, beating Chicago and the New York Jets and losing to Detroit and Houston. He has completed 90 of 141 passes for 1,094 yards and six touchdowns with three interceptions.

Every week, Tannehill gets closer to returning, but Osweiler prepares as if he’s the starter regardless of what he’s hearing.

“He’s been good,” Gase said. “He’s just been going week to week and preparing like he always does. (He) waits for me to say, ‘You’re rolling’ or ‘You’re not.’ He just focuses on his job."

Osweiler has played against the Packers once during his career, losing 21-13 in the snow at Lambeau Field as a member of the Houston Texans in December 2016. He completed 22 of 35 passes for 202 yards and two touchdowns.