Jim Owczarski, Olivia Reiner and Tom Silverstein discuss who might be questionable to play in Thursday's game against the Seattle Seahawks. Packers News 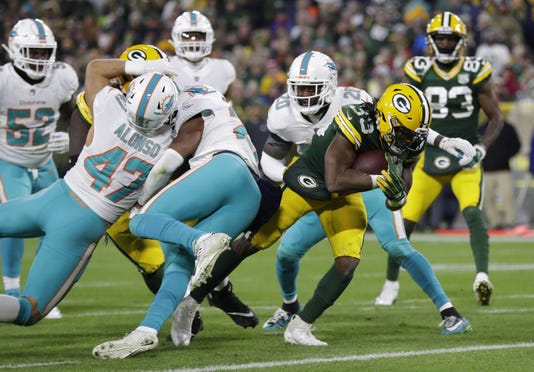 We'll start with Eric Baranczyk and Pete Dougherty writing about Packers running back Aaron Jones and how it's his vision that makes him exceptional.

What’s surprising about Jones is that he looks like an outside runner — his listed weight is 208 pounds, but he says he’s actually about 198. Backs that size usually are change-of-pace runners who try to outrun defenses to the corner.

But Jones is the rare small back who’s most effective running between the tackles because of his vision and cutback ability. That’s where he did all his damage Sunday. And we’re not talking about his 67-yard run up the middle late in the first quarter. That play was blocked exceptionally well. We’re talking about his other carries, where he picked up yards that many other backs would have missed, plays where he gained more than was blocked.

Like on his first carry of the game, at 10:54 of the first quarter. This was a typical play for him. It was designed as an outside zone to the left, meaning a run outside the left tackle. But a couple steps after taking the handoff, Jones hit a pile of players that made it tough to get outside.

Instead of just putting his head down and trying to push through for a couple yards, Jones in his peripheral vision saw the cutback lane behind center Corey Linsley, planted his foot and took the ball upfield. What probably would have been a couple-yard gain became a 12-yarder and a new set of downs.

You can read their entire analysis here:

Aaron Jones is an explosive, dynamic runner, that much is obvious. But what really separates him is his vision. https://t.co/FrPTj0azTs

Eric and Pete also hand down their position-by-position grades:

Here's our report card on Sunday's performance vs. Miami. https://t.co/fntFd75XLr

In his "4 Downs" column, Pete wrote about the Packers' use of two-tight-end sets:

We look at the best individual rushing performances since Aaron Rodgers took the helm in 2008. https://t.co/QgqSYQRQos

Tom Silverstein says to expect the revolving door in the Packers' secondary to continue this week due to injuries:

McCarthy offered no updates on the injured players, but it’s possible he’ll be without three key members of the secondary. https://t.co/brvYNdRUlZ

The injuries are starting to pile up at a bad time during a short week:

#Packers had nine players who would not have been participating had there been practice, including Aaron Rodger, Nick Perry, Kentrell Brice, Kevin King, Blake Martinez and Bashaud Breeland. Tomorrow will be a better indication. pic.twitter.com/P0K7DpQgin

In their Packers Podcast, Silverstein and Jim Owczarski discuss how the Packers' performance in beating the Dolphins could have a lasting effect:

Hosts Tom Silverstein and Jim Owczarski look at how the Packers' latest performance might carry over to their next one. https://t.co/kdDUrTUg99

Packers tight end Jimmy Graham isn't known for his blocking but feels he helped play a role in the ground game's success Sunday:

Jimmy Graham is known as a receiving threat, but on Sunday, he was a key figure in the run game. https://t.co/5mbCfyLBbV

"We're just doing our jobs... the coaches are doing a great job of dialing up blitzes." https://t.co/YJ6rrUnOmB

Ryan Wood fielded questions about Raven Greene and much more in his weekly chat:

#Bears improvement is a double hit. It means a tougher game for #Packers and higher ticket prices for fans. Seattle and Minnesota games aren't cheap either. #Packers100https://t.co/s3gmH2OJxXpic.twitter.com/JKK7OOxzIg

The rest of the NFL is finding out quickly about Jones:

172 yards from scrimmage on 18 touches.
And two @packers touchdowns!

ESPN's Rob Demovsky writes about the Packers needing to take the Aaron Jones show on the road:

Packers need 'The Aaron Jones Show' to play on the road, too https://t.co/pRQ8o46Jue

The Acme Packing Co. looks at how the Packers have fared in short weeks under Mike McCarthy:

Short-week games, especially on Thursdays, have been favorable for the Packers https://t.co/POXJUR0Rb0

The Packers will be wearing their all-white uniforms Thursday in Seattle:

Inside the sewing room 📸: https://t.co/QikfsPmsOe#GoPackGopic.twitter.com/DcKice3EF6

And finally, here's the kind of havoc Khalil Mack (remember him from Week 1) could raise when the Packers visit the Bears next month:

This looks more like a video of Mack playing 8-man football in high school, not going up against NFL players. https://t.co/tl56cbbEvZ