Nobody is reserving Kyler Fackrell’s ticket to the Pro Bowl, but the former third-round pick has become the Packers' best surprise in 2018. 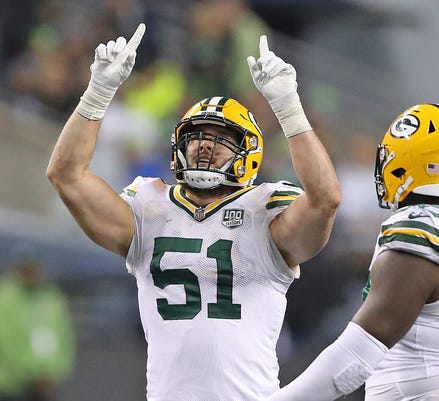 It was Bakhtiari who, in quiet moments away from the public spotlight, initially took it upon himself to fuel Fackrell’s confidence two years ago. He would provide suggestions and encouragement, often alternating between the two. He would liken Fackrell to four-time All-Pro Jared Allen, he of the 136 career sacks, a comparison nobody outside this locker room would have made.

To Bakhtiari, it didn’t matter. He saw something in Fackrell — just flashes at first — that made him believe.

“He’s got tangibles you can work with,” Bakhtiari said. “It’s all a matter of how a person uses them, and how they put it together.”

Nobody is reserving Fackrell’s ticket to the Pro Bowl, but the former third-round pick has become the Packers' best surprise in 2018. His third-year emergence has been stunning. Fackrell not only leads the Packers with eight sacks, but his five sacks in the past four games officially qualifies as a hot streak for any pass rusher.

It culminated Thursday night in Seattle with three sacks, the second time he’s had a hat trick this season. Fackrell almost had a fourth sack against the Seahawks, but the ever-elusive Russell Wilson got rid of the football just before his knee hit the ground.

“Every single play,” Fackrell said in the visitors’ locker room at CenturyLink Field, “I take the approach there’s no reason I shouldn’t win a rush.”

ANALYSIS: Packers again fail to get most out of Aaron Jones

RELATED: 5 things Packers must do to salvage their season

Such internal confidence might have drawn smirks and snickers from the fan base earlier this year. After two years, his career appeared to be nearing a dead end. Even a solid finish to last season — Fackrell had three sacks in the final seven games of 2017 — did little to change perceptions of him.

At the very least, Fackrell is changing perceptions this fall. Now, nobody is laughing. With an overhaul needed at the edge-rush position before next season, Fackrell has shown enough promise for general manager Brian Gutekunst to consider him part of the rotation going forward.

Bakhtiari, who has practiced against Fackrell over and over again these past couple years, smiled as he looked across the locker room Monday.

“I think he’s putting his moves together,” Bakhtiari said. “He’s setting people up and finishing. Obviously, I think his confidence is up. That’s all the things where, I think his first couple years he had a bad ride, and everyone was trying to bring him down. Honestly, trying to take down his career. I’m glad he was able to fight through that.

“I’m pumped. I’m sitting here just enjoying it. I just want him to just continue it, and I go and give him my two little tidbits. I always keep a little line of communication open with him, because he is a little more of a quiet guy. I remember when things were getting hard, I’d just kind of make sure he didn’t get too down in the dumps. But now, this is his big shot. I want him to enjoy it.”

If Fackrell’s first hat trick of the season against Buffalo was thought to be a fluke — two of his sacks came against a backup right tackle, and a third when Bills rookie Josh Allen tripped over him — what the Packers linebacker did Thursday night was notable for its legitimacy.

Fackrell, benefiting from strong coverage on the back end, regularly beat four-time Pro Bowl left tackle Duane Brown. When he didn’t beat Brown, Fackrell still found a way to make plays. On one third down, he batted a ball back to Wilson, who officially had a quarterback reception for minus-11 yards. The play was just as good as a sack.

“He gave an All-Pro tackle fits tonight,” fellow Packers linebacker Clay Matthews said after the Seahawks' 27-24 win, “and just made plays around the board. Whether it’s dropping into coverage, chasing down Russell, reading that play action and just winning his one-on-one rushes. I can’t say enough about his play. He’s playing really, really well.

“He needs to get some notoriety. Because I know people don’t know his name, but they ought to after tonight.”

Fans aren’t the only ones who will learn Fackrell’s name after Thursday night. Better believe opposing offenses noticed, too.

RELATED: Jimmy Graham will try to give it a go; Mike Daniels out

RELATED: Packers Podcast: Can McCarthy and Rodgers salvage the season together?

The lack of production from Matthews and outside linebacker Nick Perry might mean more attention paid to Fackrell. What seemed crazy early this season — that opponents would use two blockers against him — could become the norm.

For Fackrell, the next step will be to show he can handle more obstacles in his way.

Fackrell shrugged when asked what he’s doing differently. He acknowledges he has won more rushes recently than in the past, but if there’s a reason for the increased production, he isn’t sharing.

Bakthiari believes Fackrell has benefited from more consistent playing time, brought on by injuries at the position. Those extra snaps will stay as long as Fackrell keeps playing well.

The question, of course, is whether Fackrell’s level of play is sustainable. Again, he shrugged. No reason, he said, to think he can’t continue doing what he’s recently done.

“I think I’ve done a better job of being consistently more competitive in rushes," Fackrell said. Really, the main thing is to not get stuck, continue with the effort. Sometimes it’s not always a clean win on a sack, but it’s a last-second effort.