The bottom line is that Aaron Rodgers has to hold up his end of the bargain just as much as Mike McCarthy does.

Olivia Reiner and Tom Silverstein look at one of the Vikings' well-known defensive schemes and discuss what the Packers will have to prepare for. Packers News 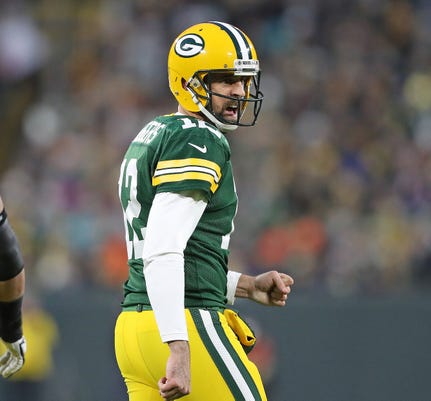 GREEN BAY – The idea that the Green Bay Packers are wasting the best years of quarterback Aaron Rodgers’ career by employing Mike McCarthy as their head coach used to be only a fan narrative.

All you see are no Super Bowls since the 2010 season.

But lately, the narrative has spread to numerous national pundits, who worship the play of Rodgers and can’t understand why he isn’t having the same amount of success as New England’s Tom Brady. They believe his arm would be tired from raising Lombardi Trophies were he not stifled in McCarthy’s offense.

It’s fine for fans to believe that because, well, they’re fans.

In their minds, Brett Favre won multiple Super Bowls playing for Mike Holmgren, Drew Brees reached the mountaintop repeatedly playing in Sean Payton’s brilliant offense and Ben Roethlisberger long ago ran out of room on his mantle for another Lombardi Trophy.

And don’t even get them started on Brady. He wins the Super Bowl every year.

They believe Rodgers is being cheated out of the same kind of glory because he is forced to play in the dullest pro offense the game has ever seen. If they could just get Patriots offensive coordinator Josh McDaniels to replace McCarthy, Super Bowls would be won yearly.

What we’ve seen of late is these national radio show hosts, TV commentators and internet football experts have come around to the same type of thinking, adopting the narrative without considering that Rodgers bears some responsibility for recent and past failures.

DOUGHERTY: Behind the scenes with Aaron Rodgers' understudy

There is nothing wrong with blaming McCarthy for missed opportunities in Seattle in 2014 or sticking with defensive coordinator Dom Capers for too long or failing to ever get his special teams in order or stubbornly refusing to run the ball even when his team is averaging well over 4.0 yards per carry or not going for it on fourth-and-2 when the situation clearly called for it.

An argument can also be made that McCarthy hasn’t brought his offense along as far as Payton or Kansas City’s Andy Reid or Philadelphia’s Doug Pederson. After all, his most formative years were spent under Chiefs coach Marty Schottenheimer, who stubbornly stuck to running the ball when the rules were changing to promote passing it.

All of that may true, but it doesn’t mean he has become an offensive idiot. Rodgers won two most valuable player awards playing in McCarthy's offense. Rodgers probably has more say in the way plays are called than any other quarterback in the NFL because McCarthy has increasingly given Rodgers more and more responsibility at the line of scrimmage.

Even Rodgers, who has griped behind the scenes that he’s not thrilled with the offense and hinted as much publicly once this season, has stated that he gets plenty of say each week in the game plan. No, the Packers aren’t running the same offense as the Chiefs or Los Angeles Rams, but they do give their quarterback options to change plays before the snap or improvise after it.

The elephant in the room is that Rodgers isn’t playing up to his previous level.

The left knee injury he suffered against Chicago in the season opener undoubtedly has affected him. He had to play exclusively out of the shotgun before finally being eased back under center. He had to play with a bulky brace that limited his escape ability. And he has had to endure less than ideal pass blocking from the interior of his offensive line.

It has been hard to tell if some of the abundant misfires Rodgers has made this season were related to injury, ineffectiveness or poor play calling.

But then came last week.

The Packers have been close in all but one of their road games this season and they desperately needed to beat the Seattle Seahawks at CenturyLink Field. The Packers had a short week to prepare for the Thursday night game, but Rodgers didn’t miss any practice time and seemed to be far more comfortable with his brace no longer necessary.

McCarthy got far more creative than he had in previous weeks knowing that the Seahawks pretty much run the same defensive scheme every game and he could count on certain responses to his formations.

On the first drive, he lined up with a bunch formation to the right. Rodgers made a call at the line of scrimmage, possibly checking from a pass to run, and then tossed the ball to running back Aaron Jones, who ran behind pulling tackle Bryan Bulaga untouched to the end zone.

On the next series, he ran another bunch formation to the right and it resulted in receiver Davante Adams running free down the left sideline in man-to-man coverage. Rodgers underthrew Adams – it might have been a touchdown if he hadn’t – but it still resulted in a 41-yard gain.

On the series after that, Rodgers had tight end Robert Tonyan running free down the left side, but for some reason wouldn’t throw the ball. Instead, he held onto it. Tonyan was smart enough to keep running his route, eventually bending it across the field, and Rodgers made a spectacular throw to him in the end zone for a touchdown.

Few people, except maybe the offensive coaches, noticed that Rodgers missed the initial look to Tonyan. It would become a recurring theme throughout the game and quite possibly the reason the Packers lost the game.

In four critical third-down situations, Rodgers either passed up or misfired on throws that would have resulted in first downs, long gains or touchdowns. Three of them involved receiver Davante Adams, who is the No. 1 target on offense and should have been the first or second read on each play.

McCarthy designed a fake end around to keep the middle safety from committing too early to Adams running down the left sideline. The safety had taken a step forward and was flat-footed when Rodgers was at the end of his drop and if he throws the ball it’s a touchdown.

But Rodgers seemed preoccupied with defensive tackle Quinton Jefferson, who was pushing guard Byron Bell back toward him and decided to pull it down and try to run. He was sacked. Even if Rodgers throws it and it is picked off, it’s as good as a punt. Adams shook his head after seeing the ball wasn’t thrown.

CHALK IT UP: A look at Vikings' double-A-gap blitz

PODCAST: Is Vikings game a must-win? You bet it is

In the fourth quarter, Rodgers has a third-and-5 at the 12-yard line. McCarthy went with his favorite 3x1 receiver formation, but left Jones the option of releasing into the flat if only four rushers come. Adams had a linebacker and a safety on him, but the safety had to honor rookie Marquez Valdes-Scantling and Adams came free after spinning the linebacker like a top between the hash marks.

Rodgers didn’t throw it and tried to run. To his right, Jones stood all alone. The play ended in a sack.

On first down of the final series, which started at the Packers 25 with 5:08 to go, Rodgers’ receivers were covered, but he had Jones on a check-down right in front of him. It’s good for at least a 5-yard gain and maybe a first down if Jones can make someone miss. Rodgers wouldn’t throw it and instead threw an uncatchable ball to receiver Equanimeous St. Brown.

On third down, Valdes-Scantling was wide open in the flat for an easy first down and Rodgers threw the ball in the dirt. McCarthy decided not to go for it on fourth-and-2 and the Seahawks ran out the clock.

The point of all this is that McCarthy put Rodgers in a position to be successful against the Seahawks and Rodgers let him and the team down. The Packers paid Rodgers $130 million to win games like that and he couldn’t do it.

Over the course of his career, he ranks tied for 57th in fourth-quarter game-winning drives with 19, according to profootballreference.com. His contemporaries such as Brady (44), Drew Brees (45) and Ben Roethlisberger (41) are way ahead.

He has had two magnificent comeback victories this season, so it’s not like he’s incapable of doing it, even with a bum knee.

As the 4-5-1 Packers head into a must-win game against the Minnesota Vikings, Rodgers ranks eighth in the NFL with a 102.2 passer rating and first in fewest interceptions (one). But his completion percentage is a career-low 61.8 and his average yards per attempt (8.0) ranks ninth.

Statistically, it has been a good year for Rodgers.

But over the last four seasons he is 31-22-1 in games started and that record needs to improve dramatically if the Packers are going anywhere this season.

The bottom line is that Rodgers has to hold up his end of the bargain just as much as McCarthy does. When neither of them do that, you wind up 4-5-1. That’s where the Packers stand with their season on the line.