Despite struggles, Packers still 'keeping their eye on the target'

In years past, the Green Bay Packers plan after returning from Minnesota might have been called Victory Monday.

Despite struggles, Packers still 'keeping their eye on the target' 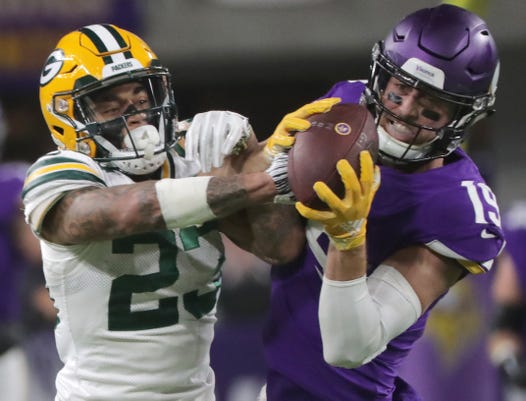 GREEN BAY – In years past, the Green Bay Packers' plan after returning from Minnesota might have been called Victory Monday.

It is common for Packers players to be given an off day on Mondays late in the season. Usually, such rewards are wrapped in accomplishment. Win a big game? Here’s an extra day away from work. Hence, the term Victory Monday.

Except, of course, there’s nothing victorious about the current state of the Packers. Not after a fourth loss in five games dropped their season record to 4-6-1, all but eliminating their playoff chances. Technically, the Packers remain mathematically alive, but they’re far from controlling their destiny. They need to win their next five games, plus get plenty of help.

Regardless, McCarthy excused his players from structured meetings Monday. Call it a mental and physical health day. Injured players were at the facility to check in with trainers, and healthy players got some time in the weight room.

“I think these Sunday night games are taxing, no doubt,” McCarthy said the day after a 24-17 loss to the Vikings. “Obviously, the game last night was a very physical football game. We have a lot of guys that are beat up, a lot of guys there’s going to be extra time sorting through exactly what we need to get done over the next 48 hours to really set our plan for Wednesday.

“Even the personal day for players, you know, 95, 98 percent of the guys are here each and every day. So it’s not uncommon. We’re just not having structured meetings today.”

When the Packers do hold their next structured meeting, McCarthy’s message doesn’t figure to change from what he told the team Sunday night

It could be easy for the Packers to drown in the big-picture reality of their current slide. Without the promise of the playoffs, the team faces a long and dreary December. Yet, cliché as it might be, McCarthy is keeping things in a much narrower perspective.

“The message to the team,” McCarthy said, “is we’re going to correct off our last contest there against the Vikings. We’ll spend extra time doing that Wednesday, and then it’s to beat the Cardinals at home. I think our team has done a really good job keeping their eye on the target. They’re fighting. They’re playing hard. They’re giving us everything they’ve got. And as their coaching staff this morning, we’re just going to keep giving them everything we’ve got.

“We need to coach better, and we need to play better. And that’s what our evaluation shows.”

DOUGHERTY: Turn out the lights on Packers' playoff hopes

INSIDER: Thumbs up to Davante Adams, down to depleted roster