Analysis: Packers poised to make some noise in 2020 season

It’s looking like the Green Bay Packers are doing a soft rebuild with their eye on the 2020 season.

Analysis: Packers poised to make some noise in 2020 season 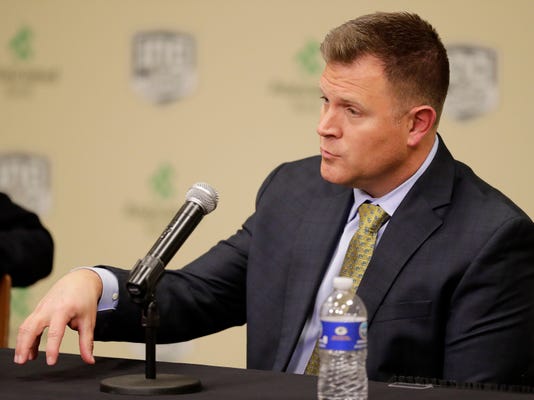 GREEN BAY - It’s looking like the Green Bay Packers are doing a soft rebuild with their eye on the 2020 season.

The biggest sign is president/CEO Mark Murphy’s decision Sunday to fire Mike McCarthy and start over with a new coach next season.

Sure, there’s a chance a new coach can click with Aaron Rodgers and, with the help of the 2019 draft and free-agent classes, contend for a Super Bowl next season. Murphy wasn’t wrong at his news conference Monday when he mentioned that possibility by pointing to Drew Brees and the New Orleans Saints, who became a bona fide Super Bowl contender last year on the strength of an outstanding 2018 draft.

More often, though, teams need a year to adjust to a new coaching staff, and vice versa.

Think back to 2006, when the Packers hired McCarthy. They had the quarterback in place with Brett Favre but still went only 8-8 that first year. Then in 2007 they were 13-3 and hosting the NFC Championship game.

There’s also the way the Packers have positioned themselves for next year’s draft, which will get a season to mature and learn how to play in the NFL before taking the field as second-year pros in 2020.

They have the extra first-round pick that general manager Brian Gutekunst picked in last year’s draft-day trade with the Saints. Granted, with the season the Saints are having, it could be in the final four picks of the first round, but it’s still a pretty high pick.

The Packers’ own first-rounder might be as high as the top third of the first round, so Gutekunst should have more than enough capital to package those two picks and trade into the top five if he thinks there’s a special player there. If not, he can draft two top-30 prospects.

Then there was Gutekunst’s recent trade of safety Ha Ha Clinton-Dix for a 2019 fourth-round pick. The Packers surely would have let Clinton-Dix walk in free agency anyway, but then they would have had to wait until 2020 to get the compensatory pick. It’s also hard to believe Clinton-Dix will sign a contract next year that nets even a fifth-rounder, let alone the fourth-rounder the Packers received from Washington.

Gutekunst also picked up an extra sixth-rounder from Seattle in his trade of Brett Hundley, so all told he has 10 picks in the 2019 draft. By 2020, this year’s promising draft class will be hitting its prime, and next spring’s class will be up and running in its second season.

Before the 2020 season, Gutekunst also will have had two offseasons to add a key free agent or two. Back in ’06, former GM Ted Thompson signed Charles Woodson as a free agent, and Woodson proved to be a critical player in the team’s runs in 2007 and to the Super Bowl title in 2010.

Rodgers will turn 37 in ’20, and this season showed there’s no guarantee he’ll be a top player as he gets older. But Favre, Tom Brady and Brees played some of their best football at that age or older – Favre was 38 when he took the Packers to the conference championship game in ’07, Brady was league MVP last year at 40, and Brees is an MVP candidate this year at 39. If Rodgers doesn’t rebound, he’ll be the exception, not the rule.

Plans can accelerate, and they can go awry. An overperformer here, or an underperformer or injury there could change everything. But in their minds, Murphy and Gutekunst might be pointing for 2020.

Though the playoffs are pretty much out of reach for the Packers, there are some things to watch for in their final four games, starting with any tweaks interim coach Joe Philbin might make in their offense.

We’ll be watching for whether Philbin does anything to improve the rhythm of the offense, such as reaching back into Rodgers’ past to go to more of a quick-throw, underneath passing game. That’s the kind of scheme McCarthy turned to in the second half of Rodgers’ first season as a starter, 2008, when the young QB was on a record-setting pace for sacks. That started Rodgers’ trajectory to becoming a star.

Also, keep an eye on how quickly the play calls and substitutions come in. Are they happening a little earlier in the play clock? Or is Rodgers still taking a couple timeouts a game to avoid delay penalties?

RELATED: Philbin downplays talk of being a candidate

Watching games from around the league, most quarterbacks run the play clock down so they can call audibles and force defenses to come out of disguises before the ball is snapped. It’s standard practice. But if the Packers' tempo is better, Rodgers might take more snaps with about five seconds left on the play clock, rather than running it all the way to end.

And will Philbin go more up-tempo? McCarthy this season often said that his best offense was the two-minute drill. But when the Packers have gone no-huddle this season, it’s always been a slow no-huddle. That prevented defenses from substituting and huddling, but it didn’t force them to pick up their tempo that much.

Philbin could push the tempo by occasionally going to more of a hurry-up no-huddle. You don’t want to do that all game, but it might be an effective changeup. It worked when used as a change-of-pace by New England against the Packers earlier this season.

» One player the Packers should take a longer look at in the final month of the season is first-year tight end Robert Tonyan. Tonyan flashed ability in training camp – he was good in the red zone, and in preseason games was the favorite target of No. 3 quarterback Tim Boyle – and caught an improvised 54-yard touchdown pass from Rodgers at Seattle.

But Tonyan, who converted to tight end from quarterback in college, has played only 23 snaps on offense this season. Nobody here is proclaiming him a starter in the making, but he has young legs and appears to catch the ball well. He warrants a longer look.

» The Packers also will get a chance to see whether Jake Kumerow can get open against NFL starters. They activated Kumerow from IR last week and he caught one pass in his five snaps. He was one of the surprises of camp – he averaged 31.7 yards on his six catches in preseason games – but that was playing mostly against backup cornerbacks. Now he’ll get his chance against starters to show he’s not the offense's version of Reggie Gilbert.