Silverstein: Lessons on how to conduct a proper Packers coaching search

Former Packers GM Ron Wolf learned a lot along the way and approached things differently in his first two hires then he did in his third.

Silverstein: Lessons on how to conduct a proper Packers coaching search 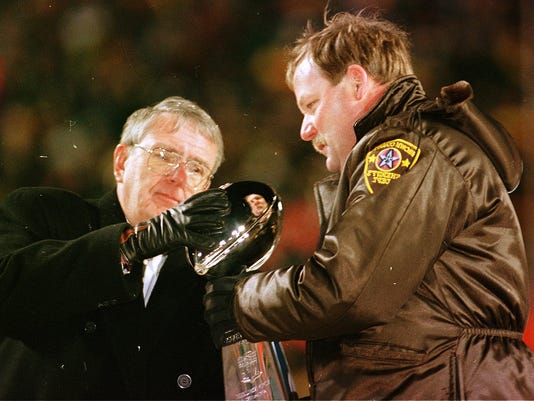 General manager Ron Wolf and coach Mike Holmgren celebrate the Super Bowl XXXI win at Lambeau Field. Holmgren was loaned a sheriff deputy's jacket because he had no heavy coat for the chilly parade through Green Bay.(Photo: USA TODAY NETWORK-Wisconsin)

GREEN BAY - Ron Wolf remembers getting a phone call from Marty Schottenheimer in the middle of his first head-coaching search with the Green Bay Packers.

The Kansas City Chiefs coach had called Wolf, the newly appointed Packers general manager, to recommend someone for the open position.

Wolf really wasn’t interested in the guy Schottenheimer was recommending, but he had heard good things about the Chiefs' special teams coach and he figured he’d drop a line in the water.

“The guy Marty recommended wasn’t that impressive, so I asked him at the end, ‘What about Bill Cowher?’” Wolf recalled Tuesday in a phone interview from his home in Florida. “it really caught him off guard. He said, ‘I don’t want to lose someone like that.’

“Right then, I knew I was on to something.”

Wolf, of course, wound up hiring Mike Holmgren and Cowher eventually became a Super Bowl-winning coach in Pittsburgh, but Wolf’s story highlights the importance of having someone tied into the football community conducting the search for a head coach.

Packers president Mark Murphy plans to use general manager Brian Gutekunst to help him find a successor for coach Mike McCarthy, who was fired Sunday night after 13 seasons. But Murphy will dictate how the search is run and make the final decision.

Wolf insisted on full authority over all football decisions when he negotiated his deal with then-president Bob Harlan in 1992 and wound up hiring three coaches during his tenure.

He hired Holmgren in 1992, Ray Rhodes in 1999 and Mike Sherman in 2000. Wolf likes to say that two out of three isn’t bad, although his Sherman decision would draw some debate.

Regardless, Wolf learned a lot along the way and approached things differently in his first two hires then he did in his third.

So, what exactly does a coaching search entail and how did Wolf conduct his?

“You need to have a plan,” Wolf said. “I was fortunate to hire someone with a dynamic personality who was a great football coach (Holmgren). I discovered after Ray Rhodes that I needed to interview a lot of people until you get the right guy.”

Wolf’s plan after firing Lindy Infante was to hire Bill Parcells, who had retired from coaching but was considering a comeback. But Parcells was going to need open-heart surgery and the two decided it wasn’t going to work out.

In the meantime, Wolf had covered his bases and pursued Holmgren, interviewing him before he had decided on Parcells. He also interviewed Terry Robiskie, who had been an assistant in Oakland when Wolf was there.

“I thought for sure Parcells would be the coach,” Wolf said. “But Holmgren was running around the country interviewing. Once Bill wasn’t going to be it, I had to increase my efforts. It wasn’t like the cupboard was bare, but it wasn’t that great.”

Wolf said he would never rely on a head-hunter such as Jed Hughes of Korn Ferry to help in the search. The executive committee used Hughes to identify Murphy and Murphy used him to help identify GM candidates after Ted Thompson was stripped of his duties.

The GM should always have a working list and Wolf felt confident in his because he had talked to so many people in the business even before the interviews started.  People that scout college talent, such as Wolf, are on the road and spend a lot of time with college coaches and scouts from other teams.

Wolf doesn’t remember how Cowher’s name popped up, but he’s pretty sure it came up while he was out scouting.

“I’m sure someone dropped it somewhere,” Wolf said. “I was on the road a lot and names pop up. Maybe you’re at lunch or dinner with other guys or when you’re watching tape, there’s a lot of back and forth and somehow names get dropped.”

When Wolf and Holmgren met, it was just the two of them, inside Wolf’s modest office at Lambeau Field. Holmgren met others in the organization, but Wolf was doing the hiring and that’s who he spent most of his time with.

Wolf said you have come prepared to the interviews. You also must ask the right questions. If the two men end up working together, they must be on the same page. A single interview isn’t going to guarantee the two will get along, but prior to the interview, Wolf had found out all he could about the coach.

“The more people you interview the more you realize they don’t have a clue.”

When he interviewed candidates, Wolf wanted to know who they were going to hire at four positions: defensive coordinator, offensive line, special teams and secondary. He said back then teams didn’t have a 25-man staff as many do now, but even if it were so back then, he’d only focus on those four positions.

A lot of times candidates were eliminated quickly because they weren’t prepared.

“There were some big-time coaches who couldn’t have passed the interview,” he said.

RELATED: Philbin downplays talk of being a candidate

The relationship lasted one year.

“I was panicking,” Wolf said. “I was going to go with someone who was a head coach. I felt we had to go with what was available.”

The third time around, Wolf interviewed or approached former head coaches, assistant coaches, college coaches, just about anyone who might be qualified to make sure he wasn’t missing out.

He talked to Spurrier again, Schottenheimer was interviewed, he even had a long interview with Wisconsin coach Barry Alvarez.

He wound up hiring Sherman after a five-hour interview in which Sherman laid out his plan for moving forward. Wolf was impressed with the detail and authority Sherman showed during the interview and decided to go with the former Packers assistant coach.

Wolf said in all the cases, identifying the right candidates is critical and then getting answers to vital questions is a close second.

“There’s certain things you want answered,” Wolf said. “If you have a gnawing problem, it’s the time to address it. You exchange niceties and then you get into one thing: football. That’s where you find out a lot about people.

“Some people are prepared, some are not. A lot of what happens there tells you about the guy. A lot of guys flunk that test.”