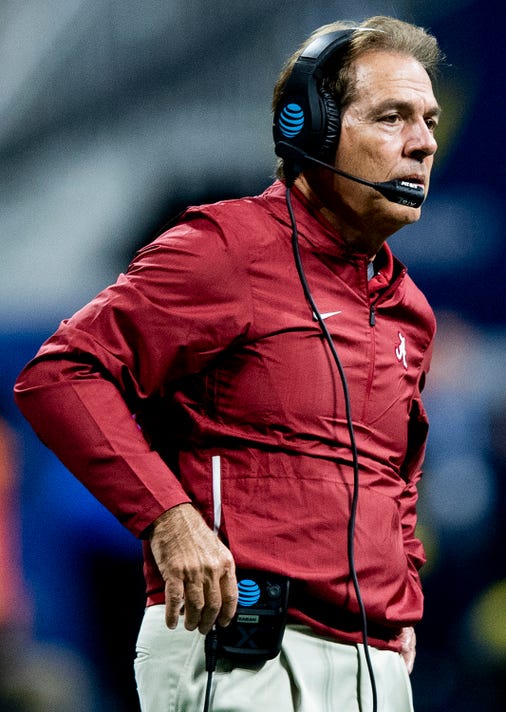 We'll start with Jonathan Jones of The MMQB raising eyebrows from Tuscaloosa, Ala., to Green Bay and beyond with his suggestion that Alabama's Nick Saban could be an ideal fit as the next Packers coach.

It would be a seismic move in the football world, one that may not have an equal in the past quarter-century. A number of things will be fairly questioned: Saban’s age (67), how his previous NFL experiences have panned out, how his coaching methods might work on adults making millions of dollars. ...

But Saban coaching the Packers could be the coach’s best shot at winning the Lombardi Trophy and QB Aaron Rodgers’s best opportunity at getting another. ...

Saban to Green Bay would be almost a Faustian bargain for someone like him. Cede some control of the program to his GM and quarterback and, in exchange, win a Super Bowl or two while finally proving your NFL bona fides.

Nick Saban coaching … the Green Bay Packers? @jjones9 on why it’s not as crazy as you may think https://t.co/oAnuSHFZP9

The Packers may have a 2020 vision for Super Bowl contention, write Eric Baranczyk and Pete Dougherty:

There's a chance a new coach can turn things around quickly. More often, though, teams need a year to adjust to a new coaching staff, and vice versa. https://t.co/za6opAc96e

Eric and Pete understandably take the Packers to task for their poor showing in the Cardinals debacle:

The Packers earned below-average grades for their 20-17 loss to the Cardinals. https://t.co/x4NMEVk2zx

Mark Murphy will dictate how the search for the next #Packers head coach is run and will make the final decision. https://t.co/BveAmHuhk0

LeRoy Butler and reporter Tom Silverstein break down a play from the Packers-Cardinals game that sums up Green Bay's dismal season. https://t.co/0vO5DQghTr

The Packers and Aaron Rodgers are OK with keeping the quarterback out of the coaching interview process:

New from JSOnline and PackersNews: Packers, Rodgers OK with not involving QB in interview process https://t.co/hnUbO0QPzw#Packers

We won't be seeing McCarthy throwing any more challenge flags this season:

Plenty of praise for McCarthy from safety Josh Jones and receiver Jake Kumerow on "Clubhouse Live":

Tom Oates of the Wisconsin State Journal says Gutekunst should run the coaching search (and the entire football operation, as well):

My column: Time is right for #Packers to put GM Brian Gutekunst in charge of all football operations, including hiring the coach. https://t.co/w5PVUiatue via @madisondotcom

The MMQB weighs in with what it considers to be "under the radar" Packers coaching candidates:

... and also explores why McCarthy will be in demand:

Mike McCarthy was just let go in Green Bay, and Josh McDaniels is less than a year removed from his about-face after accepting the Colts job. Yet, they're two of the hottest names among head-coaching candidates. @JennyVrentas explains whyhttps://t.co/AY0WBVvFMR

Ohio State's Nick Bosa is first off the board in @PFF_Mike's first mock draft of the season.

The "Good Morning Football" crew debates what kind of coach the Packers need:

The @gmfb crew discusses who they think should be the next @packers head coach. #GoPackGopic.twitter.com/nbvr8RCYZE

Just talked to former @AZCardinals HC Bruce Arians (@BruceArians). Will play the entire interview tonight when I’m in for @AfterHoursCBS on @CBSSportsRadio. BA told me he has no interest in the #Packers job. He reiterates that he is only interested in the #Browns job. #NFLpic.twitter.com/ilxhuOgeZb

For the Packers' offense, the devil is in the details:

If you’re going to be an offense that doesn’t play with details-I don’t care who your HC or QB are-you’ll at some point struggle. The @packers aren’t doing the details right now, and their QB is suffering some from it. #NFLGamePass#NFLPartner@RobDemovsky@TomSilversteinpic.twitter.com/TLTVF67mHe

Here are @89JonesNTAF's full comments on the firing of Mike McCarthy pic.twitter.com/Ld8SlgrA8x

As Clay Matthews learned last summer, beware of line drives back to the pitcher's mound:

Um, if anyone still cares, the Packers are in a bit of a free-fall in the Power Rankings:

An upset-heavy Week 13 wreaked havoc on The MMQB Power Poll, where it's now a tie atop the NFL.https://t.co/AT1IL6EhE9pic.twitter.com/hFApRjFaka