Free-agent-to-be Bashaud Breeland isn't aware of any conversations about a new contract with the Packers, but he’d welcome a chance to return. 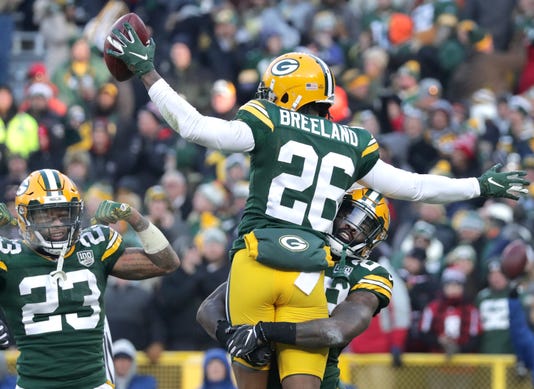 In hindsight, he probably shouldn’t have leaped into the stands. Breeland was with Washington last season, and Washington was playing in Los Angeles. The Chargers were winning 30-13. There were two minutes left.

But Breeland couldn’t contain his enthusiasm after a 96-yard return. So he found a pocket of Washington fans, and leaped like it was Lambeau Field.

“They took my ball,” Breeland said.

Watch the replay, you can see for yourself. Breeland has the football as he plunges his shoulders into the first row. When he drops back down to the field, the ball is gone. His first touchdown ball resides with a man wearing a black ball cap and Sean Taylor jersey.

So Breeland knew what he had to do Sunday. He’d just jumped tight end Austin Hooper’s route. Jumped it so quickly he looked like quarterback Matt Ryan’s intended receiver. Breeland returned it 22 yards for a touchdown, giving the Packers a 17-7 lead and igniting a win that snapped their three-game losing streak.

This Lambeau Leap was a much better idea. But when Breeland sat himself in Lambeau Field’s first row, carrying the football with him, he did one thing different. Initially waving the football freely in his right hand, he remembered last year.

“I felt like somebody grabbed it,” he said, “and I just tucked.”

Jaire Alexander was the defense’s biggest story Sunday. When you’re matched against Julio Jones — “a pretty darn good receiver,” Joe Philbin called him — for an entire game and live to tell about it, you’ve had a day. But what Breeland did Sunday against the Falcons, to use his own word, was rather “remarkable” itself.

Consider, a few months ago, Breeland was unsure whether he’d ever play in the NFL again. He expected to get good money in free agency after being a four-year starter in Washington, but his future was in doubt after a golf cart clipped his left foot. A “freak accident” that, Breeland said, had many teams unwilling to medically clear him.

The Packers took a chance when injuries hit their secondary, but they didn’t sign him to sit. So after a couple weeks to get up to speed, he played. A lot.

He was on the field for 95 percent of defensive snaps in New England, while also returning kickoffs. He played 73 percent of snaps one week later against Miami. But without a training camp to prepare, Breeland’s body couldn’t hold up. He played 30 percent of snaps at Seattle despite a nagging groin injury that only got worse.

Breeland was then sidelined the past two games until Sunday.

The Packers eased Breeland back onto the field against the Falcons, but his 23 snaps (32 percent) were enough to leave an impact. He had the pick-six and also a fumble recovery on a botched snap inside the Packers’ 10-yard line, two takeaways for a defense that was starved for turnovers.

Breeland became just the third Packers defender since the 1970 merger, and the first since Charles Woodson in 2009, to have an interception and fumble recovery in the same game.

Breeland showed Sunday what a veteran presence can mean for the Packers' young cornerbacks room. All he needed was one play to change the game. Breeland said he was able to jump Hooper’s route so effectively because he diagnosed all the possibilities before the snap.

The Falcons had three receivers on the opposite side of the field, and Hooper flexed just off the line of scrimmage.

“It was a three by one,” Breeland said. “In a reduction, you only can give me a couple routes.”

Once Hooper released up field, Breeland knew the tight end would be his assignment instead of running a shallow cross away from his zone coverage. At the top of Hooper’s route stem, Breeland gauged which way he’d cut. An inside move opened up the possibility Hooper could go vertical. Near the sideline, an outside move meant he would stay underneath.

Hooper cut his route to the outside.

The Packers signed Tramon Williams and Davon House to be the veteran presence in their cornerbacks room. Williams moved to safety more than a month ago, and House was placed on injured reserve in September. It’s too early to know what a secondary that, like much of the roster, could see significant turnover before next fall will look like in 2019.

The Packers have options, but among them is signing Breeland to another contract on what likely will be a team-friendly deal.

“I need him back,” Alexander said of his locker room neighbor. “We’ve built a good connection.”

Breeland said he wasn’t aware of any conversations about a new contract with the Packers, but that he’d welcome a chance to return.

“If I have the opportunity,” Breeland said, “I would. At this point in time, the Green Bay Packers have first dibs because I’m here. They can make it happen at any moment. But I’m not really worried about what the future holds right now. I’m living in the moment. I’m just having fun.”

Either way, Breeland will get to keep his ball. He’ll just have to wait.

At the start of the season, defensive coordinator Mike Pettine introduced something best described as a turnover cage. Every time a defender gets a turnover, he signs the football during the next day’s defensive meeting and leaves it in the cage, where it will remain until the season ends. The cage was lacking before Sunday.

Breeland helped stock it up.

DOUGHERTY: Packers prove nothing with feel-good win for Philbin

Backup offensive linemen draw on past experience to find chemistry

INSIDER: Thumbs up to defense, down to challenge flags