The Packers’ defensive stats aren’t going to wow anybody, but give Mike Pettine credit for figuring out his players as the season has gone on. 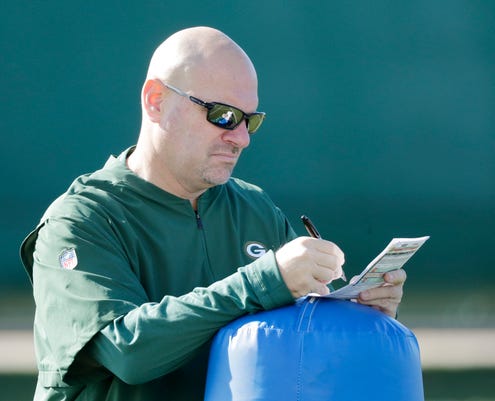 GREEN BAY - The Green Bay Packers’ defensive stats aren’t going to wow anybody, but you have to give new defensive coordinator Mike Pettine credit for figuring out his players as the season has gone on.

The Packers rank No. 17 in the NFL in scoring defense, No. 17 in yards allowed and No. 20 in defensive passer rating. That’s close to the definition of average, and for the Packers, average is an improvement from the last several seasons.

After all, this is a defense that lacks star power. Kenny Clark has been the best player and deserves Pro Bowl consideration, but he’s an interior defensive lineman with six sacks. The next best probably has been rookie cornerback Jaire Alexander.

RELATED: Breeland hoping Packers take leap of faith on him

Yet Pettine has mixed and matched personnel, and benched players when they’re not playing well, and experimented until he has found some things that work. His defense remarkably is tied for fourth in sacks (40) even though he doesn’t have much individual pass-rushing talent.

If you look at the Packers’ 34-20 win over Atlanta last week, you won’t be blown away by the numbers there, either. The Packers gave up 344 yards, including 110 yards rushing to Falcons running backs Tevin Coleman, Ito Smith and Brian Hill.

But after giving up a touchdown drive on the first series, Pettine’s defense recovered and didn’t allow another score until the fourth quarter.

The way he deployed his personnel showed how he has been able to get some pass rush with his mix of blitzes. On Sunday he trusted the talented and feisty Alexander to often match up with the game’s best receiver, Julio Jones, without help from a safety over the top even though Alexander gives up about 4½ inches of height to Jones.

That allowed Pettine to sometimes bring a safety up as part of his packages to disguise blitzes, which has been a key to the Packers getting any pass rush to speak of this season. Pettine has covered for the lack of individual pass-rushing talent by sending combinations of blitzers that include inside linebackers, safeties and cornerbacks. Everybody in the league does that, but Pettine does it more. It’s a staple of the Rex Ryan defense he cut his teeth on.

This year in 13 games the Packers’ inside linebackers, Blake Martinez (four) and Antonio Morrison (one), have combined for five sacks. Last year in 16 games, their inside linebackers had 1½. This year, their defensive backs have 3½ sacks; last year they had a combined three.

Alexander rewarded Pettine with a performance that stands in contrast to the NFC Championship in the 2016 season, when the Packers matched Jones with Ladarius Gunter plus help over the top and still watched Jones obliterate them with nine catches for 180 yards.

Jones did get behind Alexander once for a 32-yard gain only to have the play called back because of a holding penalty and another time when quarterback Matt Ryan overthrew him on a deep ball. But Alexander played him well in bump coverage and helped keep Jones from making big runs after the catch.

Jones can win a game almost singlehandedly, yet he gained a manageable 106 yards on his eight receptions. In the fourth quarter Alexander had the speed to keep up with Jones and tackle him from behind in the open field to hold him to a nine-yard gain on a crossing route, the kind of play that ruptured into a big gainer in that NFC title game two years ago.

Pettine also has made the most of the Packers’ trade of Ha Ha Clinton-Dix to Washington after seven games. He moved Tramon Williams to safety and kept him there ahead of Josh Jones even though Kentrell Brice is now back from an ankle injury and in the lineup.

Williams, a cornerback by trade, isn’t as physical a tackler as Clinton-Dix or Jones but has proven to be an upgrade because he’s been better at getting everyone lined up and doesn’t freelance in coverage.

The Packers remain undermanned on defense, especially with cornerback Kevin King out for the season because of a hamstring injury. But kudos to Pettine for finding a way to keep his defense competitive and somehow tied for fourth in sacks even though his pass rush based on talent almost surely ranks in the bottom quarter of the league.

It looks like Aaron Rodgers is pretty much back to 100 percent from his sprained knee in the opener.

When at his best, Rodgers mostly beats teams with his arm. But Sunday he beat the Falcons with his legs.

It wasn’t just that he scrambled three times for 44 yards. That’s a nice chunk of yardage, but the key was that one of the three runs converted a third down, and the other was a big gainer that put the Packers in scoring position.

The first was on a third-and-2 in the second quarter. He avoided a quarterback’s greatest enemy, pressure up the middle (by tackle Grady Jarrett), slipped outside, ran for eight yards and then slid for the first down. That drive ended with a field goal that put the Packers ahead for good.

The second was his 21-yard scramble late in the second quarter that triggered a melee after cornerback Brian Poole hit Rodgers in the right shoulder as he slid. On that one, Rodgers saw a big gap in the middle and the Falcons coverage players’ backs because they were in man-to-man, so he bolted through for the explosive gain. That set up a field goal on the final play of the half.

Those are the kinds of plays that keep drives alive and put points on the board, and Rodgers appeared to run as well he has all season.

» With three starting offensive linemen sidelined because of injuries, the Packers have to consider their run game Sunday a smashing success. Bryan Bulaga, Lane Taylor and Byron Bell all were inactive because of injuries, but their replacements, especially Lucas Patrick at left guard, blocked well in the run game.

» Bashaud Breeland’s injury issues raise a red flag — he had a non-football injury to his foot in the offseason that voided his big contract in free agency with Carolina and has missed six of his 10 games because of pulled leg muscles since he signed with the Packers. But he’s probably worth trying to re-sign on the cheap in the offseason, even if to convert to safety, because of his ability to play the ball. He showed good anticipation and ability to read quarterback Matt Ryan on the interception he returned 22 yards for a touchdown Sunday. That’s his second interception in 176 snaps, which is only 18.7 percent of the Packers’ defensive snaps this season.

DOUGHERTY: Packers prove nothing with feel-good win for Philbin

Backup offensive linemen draw on past experience to find chemistry

INSIDER: Thumbs up to defense, down to challenge flags