A promising start for the Packers has spiraled into a 5-7-1 disappointment. In Chicago, the roots of a renaissance sprung from a bitter defeat. 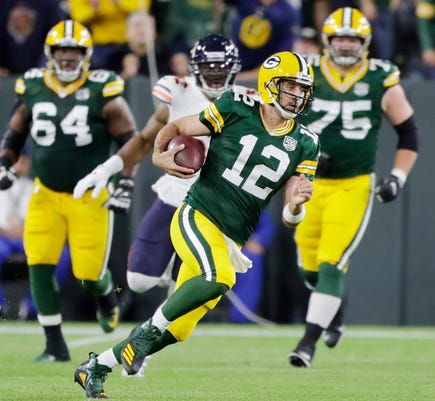 GREEN BAY – By the time Aaron Rodgers was finished Week 1, it was hard not to see a Super Bowl trip on the Green Bay Packers' horizon.

You remember the feeling that night at Lambeau Field. That anything-is-possible glow radiating from Rodgers. That here-we-go-again despair in Chicago. It wasn’t just that the Packers had somehow overcome a 20-0 deficit in the second half against a Bears defense that dominated them for 30 minutes. Or that Rodgers temporarily was knocked out of the game, only to pull off a Willis Reed-like return.

Even when the Packers quarterback started that second half, he was clearly diminished. Rodgers hobbled around on one leg. And it didn’t matter.

“Yeah, it’s a special moment in my career,” Rodgers said Wednesday. “It is the Bears, and the injury I was dealing with and the pain and the 20-0 and coming back and winning that game.”

Then Rodgers’ mind flashed through the three months since that miraculous comeback.

“It seems a long time ago,” he said, “standing here in Week 15, but that was a good moment for us. It’s a better moment when you parlay those into big-time winning seasons and championship runs.”

For one night in September, the Packers were on top of the Bears. And everything seemed as it should be in northeast Wisconsin.

It was the losing Bears who responded best from Week 1, winning their next three. They lost two after that, including an overtime defeat at Miami, but rattled off five straight wins in what became the defining stretch in the NFC North race. At 9-4, the Bears are poised to win a division championship for the first time since 2010.

RELATED: Packers in the playoffs? Here's what needs to happen

On Wednesday, cornerback Kyle Fuller described the season-opening loss as a rallying point for his team. Given the collapse in first-year head coach Matt Nagy’s first game, it could have gone very differently.

Nagy said he wouldn’t allow it.

“That was a simple football game,” Nagy said. “Sometimes you can blow it up and make it really crazy, and it can make you go the other way. I wasn’t about to let that happen with these guys. Our guys have completely responded and turned it into a positive. That’s what we talked about.”

It has helped that the Bears have grown throughout the season, especially defensively.

In their first game, they brought a defense that ranked in the top 10 last season into Lambeau Field, but also a group that was learning to play with new, significant players. Khalil Mack, one of the NFL’s top pass rushers, was freshly arrived via trade from Oakland after his offseason-long holdout. Rookie linebacker Roquan Smith, who missed much of camp with his own holdout, was limited to just eight snaps.

Smith, the eighth overall pick last April, has blossomed into one of the NFL’s top young linebackers. Mack missed two games with an ankle injury, but his 42 snaps in Week 1 remain his fewest in any game season. Together, their additions have helped the Bears take another step, becoming perhaps the league’s top defense.

“Obviously, Khalil is a top player in the NFL regardless of position,” Rodgers said. “So that’s going to make any defense better. Smith is super athletic, a sideline-to-sideline guy. He’s fast, he’s a good blitzer. Nothing against 44 (linebacker Nick Kwiatkowski), I think he’s a good player as well, but (Smith is) that special kind of rookie, the reason they drafted him where they drafted him.

“Yeah, they’re definitely playing when you add two guys like that to the mix.”

The Packers haven’t played better for most of this season. Instead, they took one of their more special regular-season wins in the Rodgers era and proceeded to fall flat on their face.

A week later, referee Tony Corrente’s controversial roughing-the-passer call stole a game that would’ve been won, sending the Packers into a spiral from which they never recovered. They’ve lost five of their seven games by a single possession, and three by a field goal or less. Unable to get a tide-turning win, the Packers fired longtime coach Mike McCarthy earlier this month.

It’s possible the Packers' demise traces back to Week 1. Rodgers returned, but his knee injury lingered. Clearly, his mobility has been diminished this season, and it’s fair to wonder if his injury pulled Rodgers into some bad habits with his fundamentals.

Rodgers has previously characterized his injury as a “sprained” knee, but suggested Wednesday it was actually more significant.

“I’ll get into that maybe after the season,” Rodgers said, “but it’s been something that’s bothered me for the majority of the season.”

The season is almost over now. A fall that began with so much promise for the Packers 15 weeks ago has spiraled into a 5-7-1 disappointment. In Chicago, the roots of a renaissance trace back to a gut-wrenching defeat.

Funny how things change in the NFL.