Jim Owczarski, Olivia Reiner and Ryan Wood discuss the Packers' Week 1 performance against the Bears at and how it may translate to Week 15. Packers News 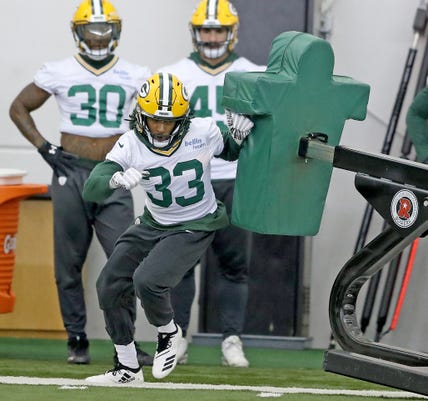 GREEN BAY – Aaron Jones has a chance to accomplish something no NFL running back has done in close to a decade, and none ever in the 100-season history of the Green Bay Packers.

It's not just that Jones has 720 rushing yards with three games left, meaning he'll need to average 94 rushing yards per game to reach 1,000. Jones said the milestone is on his mind.

“Yeah, I’m aware of that,” he said. “That was one of my goals for myself this season, was to reach 1,000 yards. And I think that’s any back’s goal. It’s like the standard mark, you want to hit that.”

But even more impressive: Few running backs in NFL history have hit that mark the way Jones might.

With 129 rush attempts, Jones’ 11.7 carries-per-game pace puts him on track to finish this season with 164. He would need more carries than that to reach 1,000 yards, but it’s unlikely he’ll average 24 carries per game over the next three weeks, which would put him at 200.

Beattie Feathers of the 1934 Chicago Bears, the NFL’s first 1,000-yard runner, still holds the record for fewest carries to reach the milestone with 119. C.J. Spiller became the second fastest to reach 1,000 yards in 2012, needing only 154.

Jones said he wasn’t aware how rare his efficiency was in context, but that he prides himself on being a home-run threat.

It’s unlikely Jones can make much headway this week in Chicago. The Bears rank second in the NFL allowing 83.2 rushing yards per game. They held Los Angeles Rams tailback Todd Gurley to 28 yards on 11 carries last week, the fewest since his rookie season in 2015.

But Jones could more than compensate in the final two weeks, when the Packers travel to the New York Jets before closing their season at home against the Detroit Lions. The Jets rank 27th in the NFL with 132 rushing yards allowed per game, while the Lions rank tied for 17th with 115.2.

Throughout the season, Packers fans have wanted to see Jones get more carries. Jones has a different spin on the idea.

Cornerback Josh Jackson’s final interception with the Iowa Hawkeyes occurred against Boston College during the Pinstripe Bowl at Yankee Stadium on Dec. 27, 2017.

He’s still waiting for his first interception as a professional.

The Packers' second-round pick led the nation in interceptions with eight last year and it was part of the reason general manager Brian Gutekunst felt he could succeed in any system despite playing mostly zone in college.

Jackson has played the second-most snaps (593) of any rookie behind first-round pick Jaire Alexander (680) and has been a starter the last three games with Kevin King on injured reserve and Bashaud Breeland battling a groin injury.

At 6-foot, 196 pounds, Jackson sometimes works outside and sometimes in the slot depending on the match-up. His long arms allow him to get his hands on receivers and also deflect balls others can’t get to.

He ranks second on the team behind Alexander (14) in pass break-ups with 11 but has come up empty in the turnover column. Alexander has only one interception, so as a tandem they’re way behind the curve.

It’s one reason the Packers have just seven. If that total were to remain the same through the end of the year, it would break the club record for fewest in a season (eight) set by the 2004 team.

“You have to go with what’s given,” Jackson said. “It’s definitely not a physical thing. You have to just expect the ball to come to you. You have to think every play, ‘The ball’s coming to me.’

“You have to know what to do in a situation when the ball is coming to you.”

RELATED: Packers in the playoffs? Here's what needs to happen

Breeland has the Packers' last two interceptions. Emphasizing how dry the desert is among the other cornerbacks, Breeland’s occurred over a five-game span and in the three games between he played just 21 snaps due to injury.

Four of the interceptions this season are by players no longer on the 53-man roster.

If the Packers are going to beat the Chicago Bears on Sunday at Soldier Field, they’re probably going to need to be more opportunistic. Bears quarterback Mitch Trubisky has thrown 12 interceptions in the 11 games in which he has appeared and ranks 27th in interception percentage (351 attempts).

He has thrown five in his last two games, including three in a 15-6 victory over the Los Angeles Rams last week.

Jackson has taken some lumps as a rookie, being in coverage on at least six of the 20-yard completions the Packers have allowed and ranking among the team leaders in missed tackles. All of that would be easier to stomach if he were taking the ball away in the fashion he did last year.

He said he’s trying not to press for interceptions because he said normally they have just come to him.

“You have to play your technique, play sound,” he said. “I think it’s just about trust, trusting yourself, believing. I think that’s something that I’m now starting to understand, to figure out, that I belong, that I can make these plays.

"It’s all mental. I’ve had to rewire my mind. It’s just the beginning of a journey, not the end. I’m trying to grow with it and stay with it.”

Starting right tackle Bryan Bulaga did not participate in practice for the fifth straight day, dating to last week. He initially injured a knee against Arizona on Dec. 2 and did not play against Atlanta. Defensive tackle Kenny Clark (elbow) and cornerback Bashaud Breeland (personal) also did not practice. Returning to practice fully were tight end Jimmy Graham (knee/thumb) and starting left guard Lane Taylor (foot). Outside linebacker Clay Matthews remained limited with an ankle injury.

Two years ago, center Corey Linsley jogged to the sideline at Soldier Field during a mid-December game against the Bears. He had an equipment malfunction, and missed only one snap before returning.

Linsley hasn’t been on the sideline since.

The Packers center is approaching the two-year mark since he last missed a snap. Whether snapping to Aaron Rodgers or Brett Hundley, he was on the field for all 1,047 snaps in 2017, and has played all 860 snaps through the first 13 games this season.

As he prepares for another trip to Chicago, Linsley has played more than 2,041 consecutive snaps over 31 straight starts, but also 2,435 of the past 2,436 snaps.

All of which was enough to make offensive line coach James Campen knock on wood.

“Having a guy like that in the middle fanning out information and gathering from one side to the next is very important,” Campen said. “But also I just think a guy that creates stability among the people around you, and those things are contagious. If you play this game, there’s injuries and things like that that happen a lot. The different things that maybe some people would not play with, and Corey has played with things.

“So it also shows a lot of toughness, and the want-to to be good with his team. So it’s infectious. It’s excellent.”