Though the Green Bay Packers’ game Sunday didn’t mean anything in the playoffs race, it wasn’t meaningless when looking to next season.

Jim Owczarski, Olivia Reiner and Tom Silverstein unpack the positives and negatives from the Packers' win over the New York Jets. Packers News 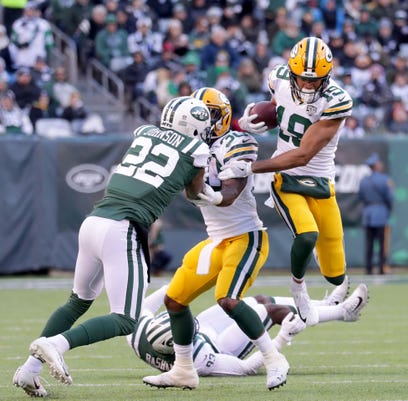 Though the Green Bay Packers’ game Sunday didn’t mean anything in the playoff race, it wasn’t meaningless when looking to next season.

And one of the things that jumped out in the Packers’ 44-38 win over the New York Jets is that for all the position groups that general manager Brian Gutekunst will have to address this offseason, wide receiver is one position he won’t.

Rookies Equanimeous St. Brown and Marquez Valdes-Scantling combined for 10 catches for 169 yards against the Jets and showcased how far they’ve come along in their rookie seasons as receivers and complete football players. With Davante Adams and injured Geronimo Allison returning next season, the Packers look solid at receiver for 2019, even if Randall Cobb departs via free agency.

Fifteen games into their rookie seasons, St. Brown and Valdes-Scantling look like bona fide NFL receivers, and there’s a good chance in a couple years we’ll look back on this draft and say Gutekunst did well getting them in the late rounds (Valdes-Scantling in the fifth and St. Brown in the sixth). In fact, with the improvement they’ve shown in their first seasons, it’s not out of line to wonder if either or both could eventually reach a Jordy Nelson-level of performance, if not better.

What separated Nelson in his decorated career was that he improved as a route runner year after year and was a complete player who blocked well downfield, too. Only time will tell on the two rookies’ yearly improvement, but as this season has gone on both have shown the willingness to block. More on that later.

What’s true is that after an up-and-down season both rookies showed improved route running against the Jets and took a big step toward earning Aaron Rodgers’ trust, which should help them and the Packers next season. The only way to earn that trust is in games, and they never would have had the chance if the Packers had sat Rodgers because they were out of the playoff hunt.

Though Valdes-Scantling started the season better, St. Brown has made the bigger jump of the two as the season has gone on. Both have a big catch radius, but St. Brown catches the ball better and is skilled plucking the ball with his hands. The improvement in his route running suggests he’s a heady player as well.

One of the Packers’ best plays Sunday was St. Brown’s 24-yard catch along the sidelines in the fourth quarter that jump-started a scoring drive. Just after catching the ball, Brown took a hard shot to the face by Jets safety Daryl Roberts. St. Brown held onto the ball even though the hit was penalized for unnecessary roughness and knocked him from the game. That was a tough play by a young player.

The Packers have liked St. Brown’s blocking since early in the season, which he demonstrated again Sunday. One of his best blocks was late in the second quarter when he helped running back Jamaal Williams turn the left corner for a 15-yard gain with his block on safety Buster Skrine. 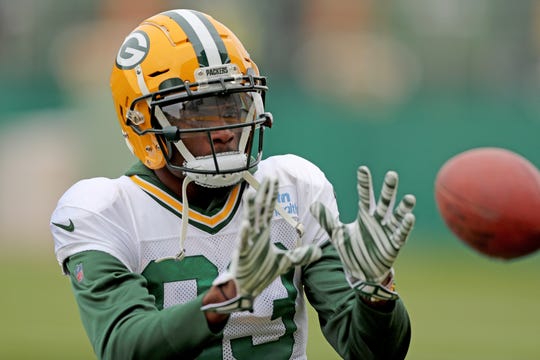 Valdes-Scantling has made some big plays this season because of his speed, but his route running had been imprecise and he sometimes had trouble getting off the line of scrimmage against press coverage. But on Sunday a play that made you think he’s really starting to get it came late in the third quarter. On a simple slant route he drove several yards up field against Skrine one on one, then did a quick arm-over move as he cut inside that freed him up for an easy 15 yards. That was a skilled, precise route.

He also had two catches where he found open windows against zone coverage and sat — he tended to drift on plays like that earlier in the season. One was a 12-yard catch in the middle of the second quarter, the other a 42-yard catch and run in the fourth quarter that converted a big third down.

Another play that jumped out was Rodgers’ 23-yard scramble to the 1 late in the fourth quarter. When Valdes-Scantling saw Rodgers running at him in the left flat, he turned and started blocking cornerback Parry Nickerson at the 14-yard line until he’d pushed him into the end zone.

Of the three receivers Gutekunst drafted receivers last April, J’Mon Moore was the highest picked, in the fourth round. But it’s looking like St. Brown and Valdes-Scantling are going to be the players.

The best way to summarize former second-round pick Josh Jones at the end of his second NFL season is that the closer he plays to the line of scrimmage, the better he plays. If the Packers are going to get much out of him going forward, they’ll have to find a way to get him near the line as much as possible.

Against the Jets, Jones again showed he can be a decent blitzer and is a good physical tackler in the run game — he led the Packers with 12 tackles, including six solo. One play that was emblematic of his run defense came on the first snap of the fourth quarter, when he crept up from deep safety before the snap, saw a run to his right and pushed running back Trenton Cannon out of bounds for only a two-yard gain. He had a similar play in third quarter when Kyler Fackrell held the edge and turned Cannon up field, and Jones filled hard and made the tackle for another two-yard gain.

But Jones isn’t nearly as good playing deep safety in coverage. He doesn’t recognize routes quickly enough and sometimes struggles playing the ball in the air. He also has been beaten out for a nickel linebacker role this season by Jermaine Whitehead and then Eddie Pleasant, who was signed off the street.

Jones more than anyone has to hope that Mike Pettine stays on as defensive coordinator for the Packers’ next coaching staff. Then he won’t have to start over with a new scheme and coach.

» First-year tight end Robert Tonyan finally got more than a few snaps (15 total) and though he was targeted only once, it was a big one. On a fourth-and-1 in the fourth quarter, he lined up a couple yards outside left tackle and ran about as precise and tight a route as a tight end can in a short six-yard out. Aaron Rodgers hit him, and he turned it into an 11-yard gain.

» Undrafted rookie Tyler Lancaster showed his performance last week as a starting defensive tackle wasn’t just a one-off. He offers little as a pass rusher but again showed he’s a solid NFL run defender who can hold his ground in the middle of the line. He had five tackles in his 47 defensive snaps.

OT win over Jets far from meaningless for Rodgers

Packers turn to Jamaal Williams in key moments during comeback

INSIDER: Thumbs up to trio of rookie wide receivers