Jim Owczarski, Olivia Reiner and Tom Silverstein unpack the positives and negatives from the Packers' win over the New York Jets. Packers News 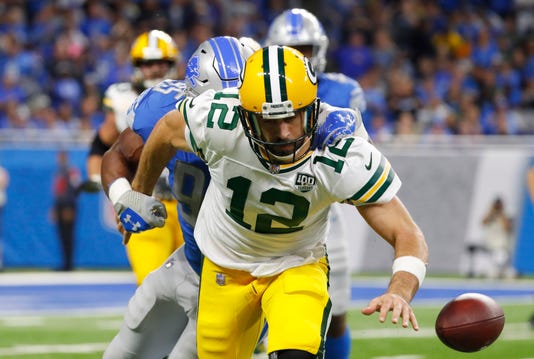 The Green Bay Packers had nothing, standings-wise, to play for in New York — but they rallied from 15 points down in the fourth quarter to beat the Jets 44-38 in overtime. It sets them up for their 2018 season and home finale Sunday against the Detroit Lions, a team they lost to 31-23 on Oct. 7. A victory would keep the Packers from finishing the year with the same number of victories as the Lions.

Basics on the Lions

Also with nothing to play for, the Lions put up a weak effort against Minnesota in their home finale. They lost 27-9 to the Vikings, allowing 27 unanswered points after Matt Prater staked them to a 9-0 lead late in the second quarter. In fact, they lost that lead before the half ended, as the Vikings scored two touchdowns in the final 92 seconds of the half. Matthew Stafford threw for just 116 yards and the Lions averaged just 3.2 yards per offensive play.

First-year Lions head coach Matt Patricia supposedly brought a defensive mindset to the team after six years as Bill Belichick’s defensive coordinator in New England. Patricia installed a 4-3 front but he isn’t afraid to mix up fronts and pressure packages. To serve as his defensive coordinator, Patricia brought in Paul Pasqualoni, who coordinated defenses in Miami (2008-09) and Dallas (2010) and used a 3-4.

Patricia retained offensive coordinator Jim Bob Cooter, who has developed a good relationship with Stafford. Cooter is from the “Air Coryell” offensive tree, which likes to establish a power run game in order to push the ball down the field.

Interceptions by Matthew Stafford, his most since throwing 13 in 2015.

Number of spots in the league rankings the Lions' scoring offense has fallen in one season, ranking No. 7 last year. They are No. 26 this season in scoring.

Emerging rookie running back Kerryon Johnson was placed on injured reserve, and Zenner — a fourth-year running back out of South Dakota State — has been given the bulk of the carries the last three weeks. He’s not running a lot (30 carries) but he has been effective, rushing for 144 yards for a 4.8 yards per carry average. He’s not a receiving threat, however, so look for the 5-foot, 11-inch, 221-pounder between the tackles.

The Lions' defense harassed Aaron Rodgers all day when the teams met in Detroit back in October, and that included the 6-4, 274-pound third-year player out of Notre Dame. He sacked Rodgers twice in that Lions victory. He has continued to put pressure on quarterbacks all season and leads the Lions with 7.5 quarterback take-downs. He also had 13 hits on quarterbacks and eight tackles for loss.

One of the better corners in the league, Slay will likely be charged with trying to prevent Packers receiver Davante Adams from setting the single-season franchise record for catches. The 27-year-old corner out of Mississippi State has three interceptions and 15 passes defensed this season. He also has returned one interception for a score.

The Lions are another bad team and the Packers have, for the better part of this season, struggled to win games against teams they seemingly should handle. The Packers have six victories with their season-opening victory over Chicago being the only against a team with a winning record. They’ve also notably dropped games to Detroit and Arizona. The Packers did start slow against the Jets and it’s possible the Lions come out, at least to start, with a bit of fire. And if that breeds success, it could be a long day. Also, if Packers interim head coach Joe Philbin elects to pull key players early, the Packers could just be undermanned.

If the Packers were truly going to pack it in for the year, they would have done it on the road in New York — especially once they were down by multiple scores throughout the game and entering the fourth quarter. Even if Philbin decides it’s smart to pull Rodgers and other key players in the back half or final quarter of the game (especially once Adams sets the single-season receptions record), the Packers are still going to play hard in their home finale. And frankly, it can be argued Patricia lost the Lions back in training camp and they’ll have their cars running before they even touch back down in Detroit on Sunday night.

Did you see this?

VIDEO
Anybody else hear this? @AdamRStroz "Nothing really matters to me" #DetroitLions#ImRich Nah just had one few too many @riger1984pic.twitter.com/QckJoUw2fk