Robert Tonyan has had a hard time convincing the Packers he can play well even though he was a star in training camp and makes things things happen. 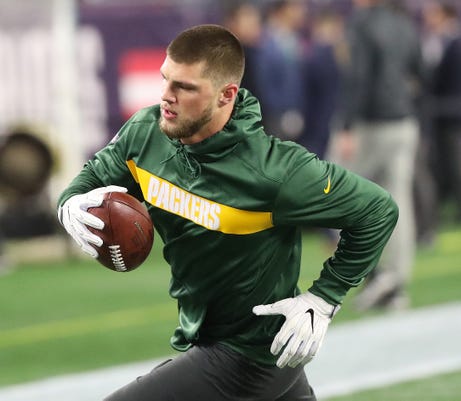 GREEN BAY – Tight end Robert Tonyan envisions the day when he can do for the Green Bay Packers more of what he did Sunday with his team trailing 35-23.

It was fourth and 1 at the New York Jets 46-yard line and Tonyan was lined up flexed to the left side where veteran Jimmy Graham usually stands on passing downs. He had an inside linebacker ahead of him to the right in what appeared to be man-to-man coverage.

“The linebacker had inside leverage so I just kept him there, ran at him, released at him,” Tonyan said. “Held him there and then pressed vertical and broke out.”

The ball came on time and Tonyan’s 11-yard reception from quarterback Aaron Rodgers kept an eventual eight-play, 94-yard touchdown drive going in a game the Packers eventually won in overtime.

It earned him some points.

"It was nice because ‘12’ came up to me after the game and he was like, ‘Hey, could you see me because I couldn’t see you?’ So, it was perfect that he trusted me in that situation. It was nice. He read the defense and trusts you’re going to be in that spot on fourth and one.”

The 6-5, 245-pound Tonyan has had a hard time convincing the Packers he can perform like that on a consistent basis even though he was a star in training camp and has seemed to make things happen when the ball is thrown his way this season (three catches for 70 yards and a touchdown).

He has played just 53 offensive snaps while occupying the fourth spot on the tight end depth chart behind Graham, Lance Kendricks and Marcedes Lewis. He is a project who has terrific receiving skills but has trouble run blocking.

Unfazed by the lack of playing time, Tonyan, a former college quarterback and wide receiver, took to instruction right away. So much so, he became an apprentice for the three tight ends, soaking up something different from each of them.

RELATED: Lambeau Field in winter can be a Rubik's Cube for kickers

“Lance from last year taking me in, right away first day, took me in and just started showing the ropes of how to be a pro,” Tonyan said. “And when Jimmy came in, he saw potential in me and has just been working with me. And when Marcedes came in, being the run-game guy, (he began teaching) first day.

The Packers have one game left and Tonyan is hoping for more playing time. He might just get it because Tonyan might be the only one of the four on the 53-man roster who returns next season.

It may be his position until general manager Brian Gutekunst signs a veteran free agent or drafts a better prospect.

Graham has a $5 million roster bonus due in March that the Packers likely won’t pay after watching the 32-year-old veteran free-agent addition lumber around this year.

He has caught 52 passes for 615 yards (11.8 average) and two touchdowns, which are fine numbers, but he hasn’t been a factor in the red zone and doesn’t get open deep down the middle very often. He has become a possession-type tight end after years of stretching the field.

To come back, Graham would probably have to take a significant pay cut to knock down his $12.67 million cap number.

Kendricks, 30, has fulfilled the role the Packers envisioned when they signed him to a two-year, $4 million in March of 2017. He can play anywhere on the field and gives it his all as a blocker. But he has dropped too many passes and isn’t getting any younger.

He has 19 catches for 170 yards and a touchdown. He will be a free agent in March and probably would be a fall-back option late in the offseason.

Lewis, 34, was brought in on a one-year deal to help the run-blocking, but he has only played 18 percent of the offensive snaps and has only three catches for 39 yards. Even if he decides to play another year, it’s doubtful it would be for the Packers.

Asked about his tight ends Wednesday, Rodgers gushed about the three veterans. He called Kendricks “a first-class human being” and a “great presence in the locker room.” He said he couldn’t think of “a more professional player that I’ve been around” than Lewis.

Rodgers said he’d like another shot at playing with Graham to see if they could accomplish what they set out to do in 2018, but he knows the financial ramifications and probably wouldn’t be surprised if Graham were released before his roster bonus is due.

All of it means Tonyan will be the Packers’ No. 1 option until free agency or the draft delivers someone else.

Among the free-agent possibilities the Packers could explore is Oakland’s Jared Cook, who should be still playing for the Packers had his agents not overplayed his hand (he has new agents) three years ago, Pittsburgh’s Jesse James, Cincinnati’s Tyler Kroft, Arizona’s Ricky Seals-Jones and Baltimore’s Nick Boyle.

The draft has several good options and it’s practically a lock Gutekunst will grab one.

Tonyan can’t preoccupy himself with any of that, especially with one game left and a chance to show Gutekunst more of what he can do. He said he hasn’t dwelled on why he isn’t playing much because he can’t do anything about it other than practice better. Nothing is a sure thing and he has to move fast to prove he can play in the NFL.

“There’s growing pains, just like with any person,” Tonyan said. “Unfortunately, mine is toward the end of the year because I’m starting to get more and more reps every week. I’m just trying to stay dialed into the game plan and ask questions and build that relationship with him (Rodgers).

“Obviously, it’s getting stronger because he is trusting me more and I’m getting more playing time.”

There have been times this year that Rodgers has gotten angry with Tonyan for not running the route the way he wants it or some inconsistency that plagues the young tight end. It happened during the practice week leading up to the Jets game.

Tonyan said he’s fine with that. He prefers bluntness and honesty.

The most difficult part for him, and possibly a reason he hasn’t been able to get on the field as much as he would like, is staying keyed in to all the different audibles, hand signals and adjustments Rodgers makes at the line of scrimmage.

“Just at the line of scrimmage with him signaling and stuff like that because he’s trying to confuse the defense and throw them off,” Tonyan said. “Sometimes you get thrown off by what he’s doing, so you just have to stay locked on him at all times and study his tendencies and what he likes in certain situations.

“(You have to) get with him during the week and make he sure he knows you’re on the right page.”

Tonyan said he wants to build lower-body strength so he can explode out of his stance faster when he’s called on to run block. After bulking up 13 pounds over the offseason, Tonyan said he should be more comfortable with the extra weight next season.

In the meantime, he’s soaking up as much as he can from the three veterans. Pretty soon, he’ll be on his own.

Packers QB Aaron Rodgers talks about what's on the line in the season finale and how he'll be playing for his teammates and interim coach Joe Philbin. Packers News