Mark Murphy and Brian Gutekunst both view Northwestern's Pat Fitzgerald as someone they must have on their short list of head-coaching candidates. 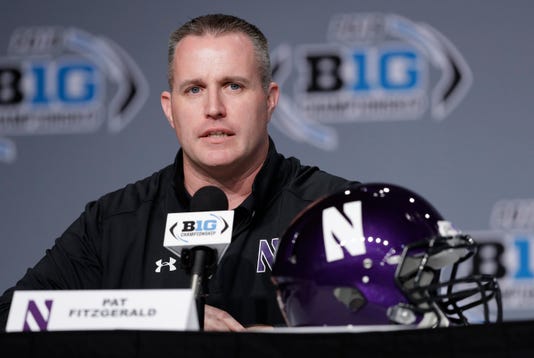 GREEN BAY - Almost all the interviews general manager Brian Gutekunst and president/CEO Mark Murphy are going to conduct in their search for Mike McCarthy’s replacement will be with coaches who are employed in the NFL.

The one exception may be Northwestern head coach Pat Fitzgerald.

If Fitzgerald is willing to listen, Gutekunst and Murphy will feel him out, either through direct contact or intermediaries, and see if he would consider interviewing for the head-coaching position.

Eight days after the sudden death of then-Wildcats coach Randy Walker in 2006, Murphy, then Northwestern’s athletic director, named Fitzgerald to be the successor. Murphy’s decision turned out to be golden when Fitzgerald took the program Walker had established and raised it to another level.

In his years as a college scout, Gutekunst became a huge admirer of Fitzgerald's, according to multiple sources. Gutekunst grew up watching his father John coach in the Big Ten and knew how hard it was to establish a program that could compete with long-time powerhouses Michigan and Ohio State.

Even if Murphy and Gutekunst differ in their level of certainty about whether Fitzgerald can succeed in the NFL, both view him as someone they must have on their short list of replacements for McCarthy.

“If it were me, he’d be at the top of my list,” said one long-time NFL scout, who has visited Northwestern many times. “He’s just a guy who commands respect.”

There are pluses and minuses to Fitzgerald’s candidacy.

The first challenge would be convincing Fitzgerald, who grew up in Orland Park, Illinois, played football 44 miles north at Northwestern and a year ago signed a 10-year contract extension to coach his alma, to listen.

Northwestern has committed to having a big-time college program that can compete with the top Big Ten schools, constructing a $270 million state-of-the-art facility dedicated to football. This year, the Wildcats won the West Division, participated in the Big Ten Championship game for the first time and are scheduled to face Utah in the Holiday Bowl on Monday night.

Fitzgerald, 44, is beloved at Northwestern, a lifelong Chicago Bears fan and just now reaping all the rewards of 13 years of work as the Wildcats' head coach. He reportedly made $3.62 million this season.

Among the lures for coaching in the NFL would be at least doubling his salary, no longer having to deal with the intense pressure of recruiting and getting a chance to compete at the highest level in the game. He would have all the amenities he has at Northwestern, plus the chance to win immediately if Gutekunst can land a couple of quality free agents this offseason.

The ultimate question Gutekunst and Murphy must answer should Fitzgerald agree to an interview is whether a college coach can succeed in the NFL. As PackersNews columnist Pete Dougherty pointed out this week, the NFL has proved too big for even some of the best college coaches.

A crucial question the pair would need to answer is what kind of staff Fitzgerald could put together. His staff at Northwestern would be overmatched and he would have to compete with other new head coaches who have far more NFL contacts for the top available assistants.

“That is a good point,” the scout said. “But I think he has such a good reputation that a lot of guys would want to work for him.”

When considering a college coach, you must be sure he can adapt to the pro game quickly, otherwise you’re treading water for the first couple of years of his tenure.

Former Packers general manager Ron Wolf viewed then-Wisconsin coach Barry Alvarez as a legitimate candidate when he conducted a coaching search after the 1999 season. He interviewed Alvarez and liked him, but he said in an interview recently his fear was that the transition period for him would be three to five years.

In Fitzgerald’s case, some of the things the NFL is doing now have roots in the college game. Plus, Fitzgerald, who has a defensive background, doesn’t call plays or immerse himself in weekly X's and O's, and could hire people with NFL experience to do that.

“He’s more of the CEO type of coach,” the scout said. “You look at a guy like (Tennessee head coach) Mike Vrabel. He can command a room. I think Fitz has that. He’s very intelligent without acting like he knows everything.”

Another scout, who works for a team in the NFC North, said he doesn’t think it would be easy for Fitzgerald to make the transition. He said hiring a staff would be difficult because he doesn’t really know that many people, save for the many scouts who visit Northwestern each year.

“It would be tough,” the scout said. “He will need a good OC (offensive coordinator). Having no coaches in the NFL, it’s going to be tough. You only really know guys when you work with them.

"I think he will have an inside track with those two (Murphy and Gutekunst), but I think they go with a more-proven NFL guy.”

There is the thought that Murphy and Gutekunst wouldn’t have fired McCarthy with four games left in the season without having an idea of whom they want to hire. If they didn’t, they made a huge mistake because teams will start jumping on coaches as soon as all the firings are final Monday.

They better have a list of coaches they want to speak with right away and arrange for interviews this week. In Fitzgerald’s case, they’d have to wait until Northwestern plays its bowl game Monday night.

Many fans questioned why the Packers interviewed Jim Caldwell and Chuck Pagano, two out-of-work former head coaches, but it could have served a dual purpose. First, they get a chance to feel out two guys who know the business, undoubtedly were prepared for the interview and gave them a baseline for the candidates to follow.

But the interviews might also have been done to feel them out as to whether they would be interested in serving on the Packers' staff. It’s likely both would only come back to the NFL in a head-coaching capacity but imagine if they were able to convince Caldwell to come back and coach Aaron Rodgers.

RELATED: Robert Tonyan gives Packers a glimpse of his potential

RELATED: Lambeau Field in winter can be a Rubik's Cube for kickers

Who better to handle a veteran quarterback than a guy who was Peyton Manning’s quarterbacks coach for seven seasons and has the experience and wisdom to be an associate head coach? There’s no way Rodgers, or anyone else, could make a power move on Caldwell.

It’s possible they could interview several former head coaches and current coordinators and assistant coaches with the thought they could be hired as Fitzgerald’s assistants if they are dismissed as head-coach possibilities.

It’s also possible they could keep the entire defensive staff if Fitzgerald were hired, including defensive coordinator Mike Pettine, because Fitzgerald wouldn’t be adamant about calling plays. His knowledge of defensive schemes might be an asset in making Pettine’s defense even better.

In a Chicago Tribune story, Fitzgerald, as a player, was said to have been able to alert his teammates from his middle linebacker position whether the offense was going to run or pass by analyzing the stances of the offensive linemen.

He won both the Bronko Nagurski Trophy and the Chuck Bednarik Award as the best defensive player in college football in consecutive years, becoming the first two-time winner of both honors. He was inducted into the College Football Hall of Fame based on his accomplishments as a player.

He did it despite not being good enough to play in the NFL.

Both Dean Lowry and Tyler Lancaster, a pair of Packers defensive linemen who played for Fitzgerald at Northwestern, said they didn’t think he would have difficulty dealing with professional athletes or the professional locker room. They felt, however, that Fitzgerald would need to change his approach, and said he most likely would.

He would somehow have to meld together a staff of guys he doesn’t know, weed out those who aren’t on board with his philosophies and sell an offseason roster of 80 players on his ability to coach in the NFL.

“I know he's done a great job there motivating and leading his guys, but I can't say with confidence he could do that at the NFL level when you’re working with older men,” an NFL personnel executive said. “I don't know how he's changed in the last five years.

“But he was very energetic and really connected with the kids he had at the program. I can say I do think he has leadership, character, and gets his guys to play hard.”

All of which are things Gutekunst and Murphy are going to have to weigh in deciding whether he’s the right choice. Of course, that’s if they can even convince Fitzgerald to interview.