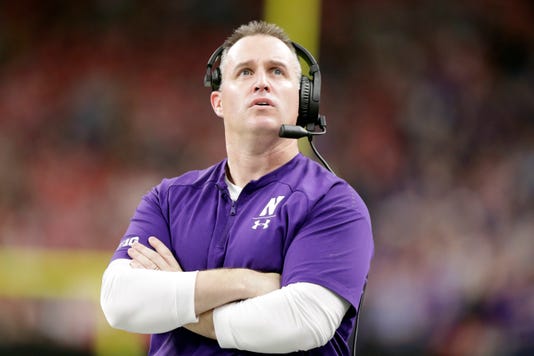 We'll start with Northwestern's Pat Fitzgerald, possibly the only college coach the Packers wanted to interview, shooting down any notion he might take an NFL job after his Wildcats outscored Utah 28-0 in the third quarter to rally for a 31-20 victory Monday in the Holiday Bowl:

"Hashtag GoCats, man," Fitzgerald said when asked about his future, according to the Associated Press. "I'm not going anywhere. This is home forever. Listen, these are my guys. ... I'm a Wildcat for life. I'm so thankful for these guys. ... We're just getting started."

Fitzgerald looked to be having fun as the final seconds of the game ran out:

Pat Fitzgerald looks like he woke up feeling dangerouspic.twitter.com/cqrOV4J5v1

Tom Silverstein writes that it would appear the Packers are seeking a coach who could instill more discipline. They also figure to want a coach who can work with a star quarterback, so it's not surprising they've asked permission to interview McDaniels.

Since McCarthy was fired, McDaniels has been the coach most likely to draw interest from the Packers because of his experience working with veteran quarterback Tom Brady. McDaniels has not been afraid to stand up to the future Hall of Famer and has coached under one of the great disciplinarians in all of sports, Bill Belichick.

Murphy and Gutekunst might feel they need someone who can deal with the big ego of Aaron Rodgers, the highest-paid player in the NFL. From the outside, it appeared he was fighting McCarthy’s authority over the offense and playing for his own statistics, refusing to take the chances that great quarterbacks take in favor of an interception record.

During his one brief head-coaching stint in Denver, McDaniels benched star receiver Brandon Marshall for disciplinary reasons before a game he needed to win to make the playoffs. After going 8-8 in 2009, he went 3-9 in ’10 before being fired.

You can read the whole column here:

Ryan Wood looks at the Packers' competition – the other NFL teams seeking a new head coach:

Here's the best way to stay up-to-the-minute with the Packers' coaching search:

If you want to keep up to date with the #Packers coaching search, check out our live blog. We have a running list of coaches the team has either interviewed or has contacted for an interview, plus continuing updates. https://t.co/6NV4VgyKlD

Jim Owczarski looks at key dates and important things to know about the Packers' search:

Who do you think the Pack should interview? https://t.co/G2ys84uQKY

Jim Owczarski, Olivia Reiner and Tom Silverstein discuss coaching changes around the NFL and who the Packers have reached out to. https://t.co/gnFRzbO6si

As they cleared out their lockers, Packers players weighed in on the coaching situation:

Fackrell would like to see Pettine back next year. https://t.co/0HdgjdeCYt

#Clubhouse Live is on Tuesday this week (6:30 p.m. CST) as we hang out with @JoshJones11_ for the final time this season. Plus, be sure to stop by The Clubhouse in downtown Appleton so you can register for some great "Extravaganza Edition" prizes. More details to come! #Packerspic.twitter.com/LkK63vkJuX

Albert Breer provides some coaching-search perspective for The MMQB, including his opinion that former Packers coach Mike McCarthy is in "a position of power":

John Harbaugh will consider all options before signing his extension with the Ravens—and teams are closely watching his decision. @AlbertBreer's news and notes https://t.co/NgT0LPcumx

Who’s in a strong position after the NFL’s latest head coach firings, and who’s in a tough spot? @ConorOrr’s winners and losers https://t.co/Qah6eP2L4b

And finally, the disappointing Minnesota Vikings are staying the course: