Former Jaguars offensive coordinator Nathaniel Hackett was credited for getting the most out of Blake Bortles, but the QB regressed.

GREEN BAY - Finding an offensive coordinator is a priority for new Green Bay Packers coach Matt LaFleur, and it appears he’s wasting no time in finding someone to help install his offense.

One of the candidates to join his staff is former Jacksonville Jaguars offensive coordinator Nathaniel Hackett, according to a source.

LaFleur and Hackett have not coached together in college or the pros, but Hackett is the son of renowned former offensive coordinator Paul Hackett and has been a coordinator for seven seasons, calling plays for Syracuse (2011-12), the Buffalo Bills (2013-14) and Jaguars (2016-18). 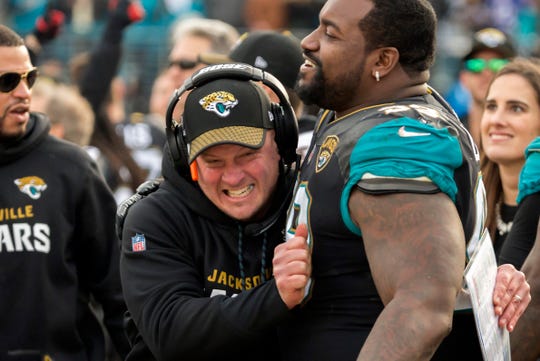 The elder Hackett helped establish the West Coast offense outside of San Francisco and was one of former Packers coach Mike McCarthy’s mentors in Kansas City.

The Jaguars fired Nathaniel Hackett in November after a 24-21 loss to the Buffalo Bills. The loss dropped the Jaguars to 3-8. They had lost their previous three games by a total of 13 points and averaged 20 points a game during the four-game span.

Hackett was credited for getting the most out of quarterback Blake Bortles, but he never got him to play on a consistent level. The Jaguars beat the New England Patriots in Week 2 and started out the season 3-1, but star running back Leonard Fournette injured his hamstring and the Jaguars' offense fell apart.

Many thought Hackett was made the scapegoat for Jacksonville’s poor season, especially considering the Jaguars had committed to Bortles with a three-year extension in the offseason.

When he was fired, the Jaguars ranked 21st in yards and 28th in points per game. The previous year, Hackett had gotten much more out of Bortles and the offense ranked sixth in yards and fifth in scoring.

DOUGHERTY: LaFleur's true test will be working with Rodgers

Hackett worked for head coach Doug Marrone at Syracuse, Buffalo and Jacksonville. He began work in the NFL as an offensive assistant under Jon Gruden with the Tampa Bay Buccaneers.

It’s probably a long shot for LaFleur to pull his brother out of San Francisco as well. Coach Kyle Shanahan has the right to deny permission for Mike LaFleur to leave and likely wouldn’t allow him to go for an offensive coordinator’s job that didn’t include play-calling.

Matt LaFleur plans on calling plays himself this season.