Ron Zook will not return as Packers special teams coach.

PackersNews.com confirmed the news that was first reported by ESPN.

Zook, 64, was hired as a special teams assistant in 2014 under coordinator Shawn Slocum. After Slocum was fired in 2015, Zook was promoted and held that position through this season. 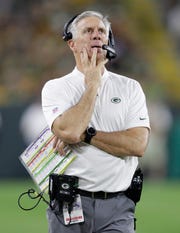 The Packers' special teams unit was a disaster in 2018, having to rotate through kick and punt returners due to Trevor Davis’ season-long hamstring issues. The Packers each week suffered through some combination of alignment penalties, penalties that negated long returns, turnovers and fake punts or field goals allowed. Kicker Mason Crosby finished 24th in the league in field goal accuracy and punter JK Scott finished 27th in net punting average.

In his last news conference before the end of the regular season, Zook was asked about his future.

“Well, I’ve been in this business a long time,” he said. “I’m honestly, fortunately I’m good. Obviously, I want to keep coaching if that allows me. But if it doesn’t, I’ll do something. I feel very comfortable with where I’m at in life and what I’m doing. But like I said I want to keep coaching, I enjoy it. This is a great place obviously and we’ll see what happens. But I don’t have near the anxiety that some people might have.”

According to the analytics web site www.footballoutsiders.com, the Packers finished 28th in the league in special teams play. Football Outsiders had the Packers ranked No. 14 in 2017, No. 21 in 2016 and No. 17 in 2015.

DOUGHERTY: LaFleur's true test will be working with Rodgers

This season, Zook worked in Scott and rookie long snapper Hunter Bradley while also having six different players return punts and seven return kicks. The Packers finished No. 21 in the league in kick return average (21.5) and No. 22 in punt return average (6.6)

Since taking over the coordinator role in 2015, Zook has been able to lean on Crosby. But he has coached punters Tim Masthay, Jake Schum, Justin Vogel and Scott. He has also worked through primary returners such as Micah Hyde, Jeff Janis, Ty Montgomery and Davis.

“The times I’ve been fired it’s been me,” said Zook, who was a college head coach. “So it’s a little bit different. But when you don’t know what your future is, obviously you want to plan ahead and you’ve got to have a way to of taking care of your family. But I think most all coaches understand that when they choose this profession. They used to always say there’s two kinds of coaches, those that have been fired or those that are going to get fired. And for the most part that’s probably fairly true. It’s just the way it is.”