In a spirited discussion, former Packers safety LeRoy Butler and reporter Tom Silverstein debate president Mark Murphy's decision to take the reins of the football side of the Packers. Packers News

The Packers' defensive pass game coordinator was dismissed on the same day the Packers announced that new coach Matt LaFleur would retain defensive coordinator Mike Pettine, as had been reported earlier this week. The Packers made no mention of any other defensive coaches in the news release and it’s possible other changes on that side of the ball will occur.

In another development, the Packers were one of the many teams pursuing Miami special teams coach Darren Rizzi after Rizzi was passed over for the Dolphins head coaching position. The Packers are looking for a replacement for Ron Zook, but if they want Rizzi, they’re going to have a lot of competition.

It is not known what other special teams coaches the Packers are considering. 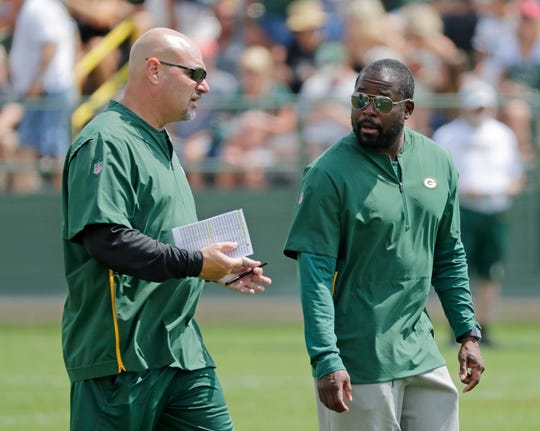 McCarthy promoted Whitt from cornerbacks coach to defensive pass game coordinator last year after passing him over for defensive coordinator in favor of Pettine. Whitt and Pettine worked well together, the source said, and it’s likely the decision to fire Whitt was made by the front office.

Other staff changes are expected to be made and it’s possible the front office is trying to clean house of those with strong ties to McCarthy. The Packers have allowed interim coach Joe Philbin, a close friend of McCarthy’s, to pursue other jobs and it wouldn’t be surprising if he didn’t return.

There has been no word on James Campen, who joined the Packers as a quality control coach in 2004 and was McCarthy’s offensive line coach starting in 2007. Campen was promoted to offensive run game coordinator last offseason and is highly regarded around the NFL.

Whitt is the first defensive coach to be fired since LaFleur was chosen to replace McCarthy on Monday. McCarthy hired Whitt as a defensive quality control assistant in 2008 and promoted him to cornerbacks coach the following year.

The Packers' secondary has not performed well in recent years, but Whitt was given mostly rookies and a lot of undrafted free agents with which to work. Defensive coordinator Dom Capers’ scheme was complicated and it made things more difficult for the younger players.

Injuries were a factor as well.

This past season, cornerback Kevin King missed half the season with a hamstring injury, Davon House missed most of the year with a shoulder injury, rookie Jaire Alexander missed three games with a groin injury and veteran Bashaud Breeland missed time with a groin injury. After safety Ha Ha Clinton-Dix was traded to Washington, veteran cornerback Tramon Williams was moved to safety.

Alexander, the No. 18 pick in the draft, developed quickly and turned into one of the best players on defense. Breeland had two interceptions(one return for a touchdown) and rookie Josh Jackson played more than 850 snaps, including special teams.

Cornerback Charles Woodson, who played for Whitt, went to bat for him on Twitter recently when it was unclear whether Pettine would return.

“Go through your history of the @packers  secondary the last 5 years and count the injuries.. Hard to coach players that aren’t available and he still did a phenomenal job,” Woodson tweeted.

Still on staff is secondary coach Jason Simmons, who was promoted to that position last year. He joined the Packers as an administrative assistant in 2011 and was assistant special teams coach from 2015-17.