Seventh in a nine-part Packers position-analysis series with 2018 grades.

Seventh in a nine-part Packers position-analysis series with 2018 grades.

GREEN BAY - In recent seasons, the Packers have prioritized no position more than cornerback. They have drafted five corners in the first or second round during the past four years, including three first rounders in that time. Their pursuit in building one of the most important positions on their roster has been constant. Their results have been mostly disappointing.

The Packers have struggled defending the perimeter of the field since 2015. That season, they had Sam Shields and Casey Hayward leading a young group that included high-round picks Damarious Randall and Quinten Rollins. Concussions ended Shields’ time in Green Bay. The Packers let Hayward leave in free agency, and he became a two-time Pro Bowler with the Los Angeles Chargers. Randall and Rollins are no longer with the team. 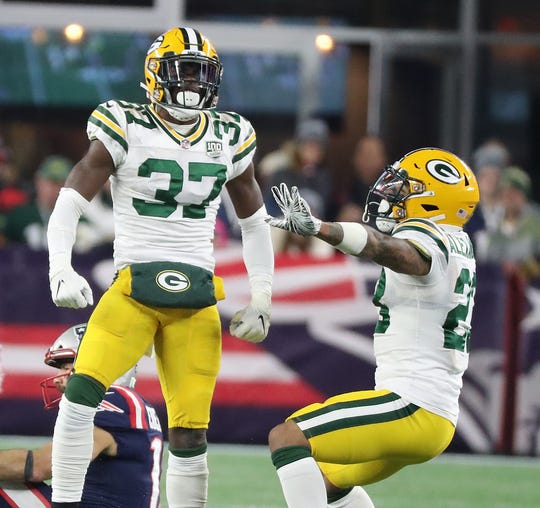 The group as a whole has suffered because of injuries and youth, but also poor decisions. This past season, the Packers tried to strike a balance between veteran leadership and developmental talent. They brought back a 35-year-old Tramon Williams and 29-year-old Davon House, joining them with youngsters Kevin King, Jaire Alexander and Josh Jackson. The end result was a pass defense that ranked 12th in the NFL, falling below the league leaders but an improvement over the previous two seasons.

Which makes this a critical offseason that could be highlighted by fierce competition. The Packers have the talent to take another step in their pass coverage. They need to find a way to keep that talent on the field.

The Packers have missed on too many first-round picks this decade, but it sure seems like they hit on their No. 18 overall pick last spring, cornerback Jaire Alexander. It was Brian Gutekunst’s first draft decision as the Packers general manager, and as such one he seriously could not afford to get wrong. Gutekunst traded twice, ultimately moving back four spots and gaining an extra first-round pick, before drafting the rookie out of Louisville. The Packers might have been better off standing pat at No. 14 and taking Derwin James, a first-team All-Pro at the safety position that became a major weakness on the Packers' roster. But cornerback is a primary position in football, and Gutekunst was able to select a good, young corner while adding an extra first-round pick this spring. Not a bad start at all.

SAFETY: Pettine's system demands more from safeties, and they failed to deliver

LINEBACKER: Look for an infusion of new blood at LB

OFFENSIVE LINE: Aggressive approach could be in store for rebuilding o-line

RUNNING BACKS: Aaron Jones still unproven as a No. 1 RB

If healthy, the Packers cornerback depth chart consists of young, promising talent. All that attention paid by the front office would have paid off. It’s just that this group is rarely healthy. The Packers entered the season with five cornerbacks: Williams, King, Alexander, Jackson and House. They combined to miss 28 games because of injury. Only Williams and Jackson played all 16 games, and Williams moved to safety midway through the season. When House went on injured reserve in September, the Packers signed Bashaud Breeland. He missed two games because of a hamstring injury, bringing the total number of games missed because of injury to 30. This has been a theme the past few seasons. Until the position gains more consistent health, it will continue to struggle.

Re-signing Breeland should be a priority, and the Packers likely would prefer to return Williams to corner, ideally playing the slot. Their presence would be important, because the biggest need — besides health — is for youngsters like King and Alexander to continue their development. The Packers hope they are the future of their cornerback position, but they’re still far from providing what Shields and Williams once did, and Charles Woodson and Al Harris before them. It’s a critical offseason for this position. The Packers need to see the assets they pumped into building their cornerback depth chart yield a healthy return.

Kevin King: When healthy, has shown some promise. Physical corner who carries himself with swagger. Length shortens passing windows. Rarely healthy. Played just 15 of 32 games in his first two seasons, both ending with him on injured reserve. History of shoulder injuries a major concern. Unable to extend arms at full length to defend passes, preventing him from playing the football. Just one interception in two years, and that was on a deep pass against the San Francisco 49ers in October. Inability to play the football might be an issue the rest of his career. Grade: C

Jaire Alexander: Fearlessness was perhaps his best attribute as a rookie. Never backed down from a challenge, and notably had his best game against the vaunted Los Angeles Rams passing attack, defending five passes. That game also highlighted the biggest area where he needs to grow: playing the football. Eleven pass breakups but just one interception last season. Ball often arrived quicker than he expected. Should work itself out as he adjusts to speed of the game, but hands could be a concern. Removed from punt return team because of inconsistency fielding the football. His 4.38 speed enabled him to recover from mistakes. Bright future if he can take next step as a playmaker. Grade: B-

Josh Jackson: Built like a free safety at 6-foot, 196 pounds, and that might be his long-term NFL position. Entered league last year with significant concerns he was too slow to play cornerback and did nothing to alleviate those as a rookie. Lack of speed was highlighted by his three defensive holding penalties and one illegal contact penalty. Only four cornerbacks in the league were penalized more, according to NFLpenalties.com. Doesn’t tackle well, turning hips to the side instead of coming in square, but possesses best ball skills in Packers secondary. Would need to bulk up five or 10 pounds if he moves to safety but has the frame to do it. Size, range and ball skills could be intriguing in middle of the field. Grade: D+

Bashaud Breeland: Signed with Packers on Sept. 26 and played in seven games, making five starts. Experienced ups and downs in first season with Packers but played at an impressive level considering he had no offseason, no training camp and was returning from a significant foot injury. Missed a handful of big plays but also had a pick-six against Atlanta. Versatile in the defensive backfield, able to play corner or safety. A free agent, and Packers would be wise to re-sign him. Only 27, should be a reliable starter with a full offseason. Grade: C

Tony Brown: Undrafted rookie from Alabama originally signed to practice squad and promoted to active roster Sept. 29. Played 11 games and made three starts. Intriguing prospect because of his athleticism (ran college track), but had much to learn. Occasionally lost control of his emotions on the field, leading to foolish penalties. Grade: D-

Will Redmond: Signed to active roster Nov. 6. Played four defensive snaps in five games. Former third-round pick by San Francisco 49ers in 2016. Injuries derailed his time in San Francisco, where he spent rookie season on injured reserve because of knee and missed half of his second season because of ankle. Between 49ers and Packers, spent time on Kansas City Chiefs practice squad. Grade: Incomplete