Sometimes, the life of an NFL player mirrors that of the fans who cheer for him and his team on Sundays. Kyler Fackrell is in that space.

Jim Owczarski and Olivia Reiner dissect the ups and downs of the 2018 Packers' linebackers. Packers News

Out in Utah, there is at least one person who’s keenly interested in what moves the Green Bay Packers will be making in free agency over the next two weeks, whether it’s by releasing players, re-signing them or finding one from another team.

Detached from social media, he’ll be watching the various sports networks to see which collegiate edge rushers are brought in for pre-draft interviews.

Sometimes, the life of an NFL player mirrors that of the fans who cheer for him and his team on Sundays.

Kyler Fackrell is in that space this offseason.

He found out Matt LaFleur was his new head coach the same way most did — through broadcast outlets. Players don’t get advance warnings on such things. The same could be said for the retention of defensive coordinator Mike Pettine, or the hiring of linebackers coaches Kirk Olivadotti and Mike Smith. 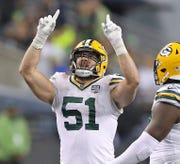 And now, with the NFL scouting combine underway and free agency to begin soon after, Fackrell is just as curious as the rest of Packers fans about what direction they may head when it comes to his position.

“I have found myself being a little more interested, just as far as like the draft and all that kind of stuff,” Fackrell told PackersNews.com. “I’m definitely hoping Nick (Perry) and Clay (Matthews) come back. I enjoy those guys being on the team. They’re obviously really talented. I’m hoping that those guys are able to come back as well and we’ll see what happens with the draft. I definitely find myself looking at that stuff a little bit more. But that stuff is out of my control and I’m just going to continue to work.”

It’s a unique time for Fackrell, who will turn 28 this November.

After being selected in the third round of the 2016 NFL draft in 2016 by former general manager Ted Thompson, he finally had his breakout campaign in his third season. He finished with 10.5 sacks, by far the team leader as well as tied for 17th in the league — but eighth by a linebacker. He also had 42 tackles and 12 quarterback hits.

“I don’t know if it’s that unusual,” Pettine said of Fackrell’s third-year jump. “It’s probably more of the exception than the norm, though. Usually, if a guy has it, that production shows early. But this is a case that a guy, he’s a — guys just take time to get used to the speed of the game and how to approach it, and how he took care of himself in the offseason, I thought he came into training camp in great shape and all the things I’ve talked about. It’s just taken time for all that to click in. Obviously, you’re seeing the results.”

The emergence in 2018 was good timing, too — he is entering the final year of his rookie deal.

But this offseason, Brian Gutekunst is into his second offseason as general manager with 10 draft picks and an estimated $35 million in cap room. It’s a talent-laden draft on the defensive side of the ball, and there are questions as to whether the team will cut Perry or re-sign Matthews. Other teams have franchise-tag decisions to make on pass rushers. Perhaps a trade market develops for a player.

RELATED: What to expect from the Packers at the combine

SILVERSTEIN: Who should stay, who should go on Packers' roster

And though Fackrell thrived in his first year under Pettine, who knows how this new coaching staff views him.

“I haven’t spoken with anyone,” he said. “You’re not allowed to talk to anybody, at least as far as football stuff is concerned. It’s a little bit weird that way, but it’s also kind of nice.”

So, he’s in familiar territory for most players. He can only control what he can control. But he’s human. He’s clearly aware of the market. He has a wife and small children. He knows the team could make moves that directly impact his future. He would like to have a discussion with the Packers about a contract extension (none have happened yet) but he also knows factors other than his play go into that.

“That’s obviously the goal, is to get to that second contract,” he said. “So yeah, I think you just have to be patient and I want to do that.

“I definitely think that that’s on my mind going into the offseason training, but again to some degree whether that happens or not is out of my control. And again, I know for one thing it’s not going to happen if I don’t produce or perform poorly. That’s really my main focus.”

So, for now, with voluntary workouts beginning around the corner April 1 under LaFleur, Fackrell is controlling what he can. He’s working out with David Stroshine at STROformance in Pleasant Grove, Utah to add some muscle to his upper body and overall strength. He played the most snaps of his career last season and is expecting to contribute just as heavily, if not more in 2019.

“I just want to take the things I needed to improve on or even the things I did well and just make sure that those are some of the focuses of this offseason and really again, a lot of those things can’t be worked on until we get back to Green Bay and we can start getting on the field and start really getting good work and good looks against the o-line,” Fackrell said. “I definitely had a sense for what I wanted to improve upon coming out of the season and that’s really what has been the focus.”

The calendar also flips quickly regarding his breakout campaign.

There is some prestige with reaching double-digit sacks at his position. It was a goal attained. But now comes the pressure to do it again and more consistently in a wholly new environment — one with new coaches, potentially new teammates and more importantly, perhaps more attention from opponents.

“Yeah, I think you always feel that pressure in anything if you were to have success,” he said. “It’s about that consistency and continuing to have that success once you’ve had it. I think it just goes back to the process that you create for yourself and continuing to work. Really, it’s all about improving. And so if you’re improving every day, that’s really what you have to focus on. I can’t really look at the next season and be like oh, I hope I get 10 sacks again. I don’t think that that’s healthy, I don’t think that’s the best way to look at it. I think just taking it one day at a time and trying to improve is really the only way that you can approach it.”