Nick Perry’s often-interrupted and largely disappointing tenure with the Green Bay Packers has come to an end. 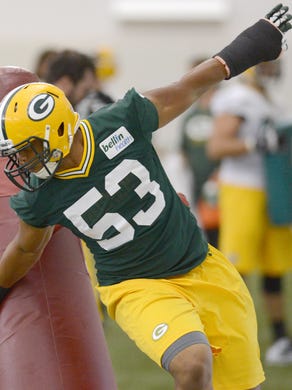 Green Bay Packers outside linebacker Nick Perry (53) pumps up his teammates before their game against the Detroit Lions on Sept. 24, 2016, at Lambeau Field in Green Bay. Mark Hoffman/Milwaukee Journal Sentinel
Fullscreen

GREEN BAY - Nick Perry’s often-interrupted and largely disappointing tenure with the Green Bay Packers has come to an end.

PackersNews.com confirmed the club would release the 28-year-old linebacker. Perry was due a $4.8 million roster bonus Friday. The club formally announced the move Tuesday.

"We want to thank Nick for his contributions to the Green Bay Packers and the community over the last seven seasons,” Packers general manager Brian Gutekunst said in a statement. “He did a tremendous job on the field, was a great teammate and a true professional. We wish Nick, his wife, Audrianna, and their family all the best.”

Perry ended 2018 on injured reserve with a right knee injury after recording a career-low 1.5 sacks in nine games. It marked the third time in his seven years that Perry ended a season on IR.

By cutting Perry before June 1, the Packers will gain $3.6 million of salary-cap room immediately. All $11 million of Perry's salary this year and the final two years of his contract are wiped off the books, but the remaining two years of his prorated signing bonus total of $3.7 million accelerates into this season.

So while $11 million of salary is taken off the books, $7.4 million of cap charges are added. The net is a $3.6 million gain in salary-cap room for the Packers, leaving them around $38 million under the $188.2 million salary cap.

Perry's total cap charge this year, referred to as "dead money" because he counts against the cap despite no longer being on the team, is $11.1 million.

On March 9, 2017 former Packers general manager Ted Thompson inked Perry to a five-year, $60 million extension after the linebacker’s best season, in which Perry had 11 sacks in 14 games. Perry received an $18.5 million signing bonus.

Selected No. 28 overall in the first round of the 2012 draft out of the University of Southern California, Perry never played a full 16-game season for the Packers and only once reached double digits in sacks. He topped four sacks just twice. He did have seven sacks in eight career playoff games, including 2½ in the 2015 wild-card round against Washington.

Perry's exit was expected after the Packers agreed to terms with edge rushers Preston Smith and Za'Darius Smith in free agency Tuesday.

Now, on the eve of the official start of free agency and over a month before the draft, the Packers have only Kyler Fackrell, Reggie Gilbert and Kendall Donnerson as returning outside linebackers on the roster. Clay Matthews is set to become an unrestricted free agent.