Packers general manager Brian Gutekunst acted quickly and decisively in landing one of his top targets in Adrian Amos.

With the Chicago Bears, the 6-foot, 214-pound safety spent most of his career battling his draft position (fifth round) and players being drafted or signed to replace him, yet he always managed to get on the field for then-defensive coordinator Vic Fangio.

“He’s definitely one of the smartest guys I’ve ever played with,” Bears cornerback Prince Amukamura said of Amos. “I know playbook isn’t going to be a (problem). He doesn’t just only know his position, but he knows what everyone else is doing around him. That’s one of the pluses that I enjoyed with playing with him.

“The thing about it with Vic’s stuff — I wouldn’t say it’s complicated — it’s just not as simple as Cover 2, Cover 3, Cover 1. There’s a lot of things that go into it.”

“He’s a young ascending player, he has great physical traits,” Gutekunst said. “He’s an explosive athlete, very good tackler. I thought he could play in the box, near the line of scrimmage. You can move him around, blitz him, do some different things with him. He can play the post, as well. In his career, I thought you saw as he grew and his instincts grew, he became more and more of a playmaker. And just again someone we kind of liked coming out of college, watched him grow, think his best football is ahead of him and we’re excited to have.” 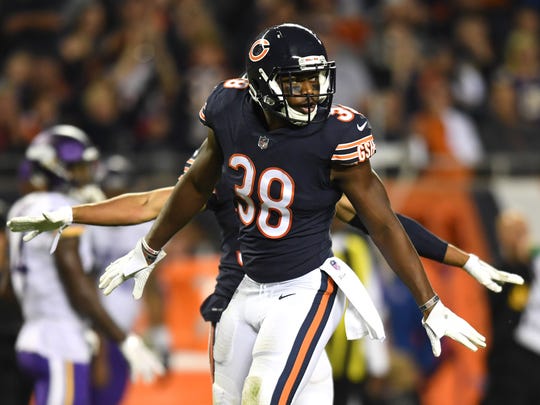 For his part, Amos wasn’t up to date on Pettine’s scheme or who may be around him — but he was certain of one thing: The Packers wanted him. Badly.

His four-year, $36 million deal (one that could reach $37 million through incentives) was agreed upon quickly on the first day of the open negotiating window March 11, making him one of the top-paid safeties in football.

RELATED: Why Packers won't be splurging for free agents next year

The Packers put a large sum of money on projecting Amos into Pettine’s scheme, but for those who know, it was a solid bet.

“Still hasn’t hit his peak yet. Explosive player that can elevate his game tremendously once he fully understands the ins and outs of studying film and the actual art of stealing plays at safety. Everything he has done has been based off pure athletic potential so I’m excited to see him expand that part of his game. He will be deadly!”

Which is saying something, because both Amukamura and Sports Illustrated film analyst Andy Benoit, who watched every snap of Amos’ 2018 season in Chicago, said Amos is becoming adept at disguising his coverages.

“He kind of aligned just enough out of position some of the time that you weren’t ever quite sure what coverage you were looking at,” said Benoit, who called the signing one of the five best of the offseason. “That’s largely the nature of the Bears’ scheme. I don’t know how much room there will be for that in Pettine’s system because Pettine tends to disguise more of his pressure concepts than with his coverages, but that’s what Amos did well for Chicago.”

Added Amukamara: “That’s extremely accurate. And when you do that it plays games with the quarterback. The quarterbacks always do their pre-snap reads and look at the safeties as one of their keys. And if the safeties are showing Cover 2, or if the safety is a little off the hash, then they’re running a certain coverage, and sometimes Amos would be all the way in the box and show single-high and then as soon as he says hike, boom, hurry up and run and get over the top of the No. 1 receiver and make plays like that.”

It remains to be seen, of course, how Amos is ultimately deployed. But with Jaire Alexander and Kevin King on the outside, the Packers may try to find out if Amos can play man coverage on tight ends. But he can definitely find a home in the zones between those corners.

Gutekunst referenced all the spots he felt Amos could fill in Pettine’s designs, and considering how Packers safeties were used throughout 2018, Amos seems like an excellent fit. Not just because he’s a willing and sure tackler, can be adept playing within Pettine’s matchup zones or even settling back as a last line of defense, but because he ultimately brings a level of surety to the back end.

“I like playing all over as I did all the way growing up even in college and playing a lot of different roles, and I feel like if I can get a chance to showcase all of that, and just being physical and being accountable,” Amos said. “I feel like that’s the biggest thing — everyone can count on me to do my job and be where I’m supposed to be when I’m supposed to be there.”