Pro Bowl guard T.J. Lang, who played eight seasons with the Green Bay Packers and was a reserve on the 2010 Super Bowl team, officially announced Friday that he has elected to retire.

Lang, 31, spent the past two seasons with the Detroit Lions after signing as a free agent before the 2017 season.

Lang was released by his hometown Lions three weeks ago and had indicated then he was prepared to retire. He has been beset by injuries, including a neck issue that forced him to finish the 2018 season on injured reserve. He also suffered six documented concussions in his career. 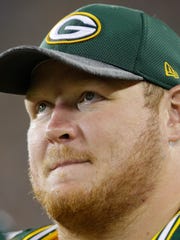 Predominantly playing at guard, Lang started 15 or 16 games in five straight seasons for the Packers.

"Thank you Green Bay Packers for taking a chance on a 21 year old kid and giving me the opportunity and patience to grow into a man and reach my full potential as a football player," Lang said in a post he shared on Twitter.

The Packers drafted Lang out of Eastern Michigan with the 109th overall choice in the 2009 NFL draft (fourth round). He made the Pro Bowl in 2016 with Green Bay and again the following year with the Lions. He was also named second-team All-Pro in 2014.

When he signed with the Lions, it marked one of the richest contracts for a guard in NFL history, a deal that included $19 million in full guarantees.

RELATED: Details of T.J. Lang's contract with the Detroit Lions

"He represented everything you could want from a football player and team captain,” Lions general manager Bob Quinn said in a statement. “We all publicly saw him perform on the field at a very high level, but what was seen in the building every day was a player who had great leadership, professionalism and passion for the game of football. It meant a lot for T.J. to play in his home city and we have the utmost respect for him as a man. We wish T.J. and his family all the best in the future.”

The Packers and some of Lang's former teammates paid their respects as well.

Lots of changes but wanted to say thank you to this guy. TJ was one of our leaders and laid the foundation and values in our o-line room. This is what toughness was. Thank you for the impact in my career and what you did for the organization. #grit#brother#enjoyretirementhttps://t.co/PGiV15woYU

Congrats Thomas! You were always a pain to play against. Happy for you. Happy you know the difference between a part and apart too. https://t.co/10k5yyorum

Congrats on an amazing career @TJLang70 !! It was an honor to share the field with you on Sundays and be the RT that played next to you. You were the epitome of a warrior on the field and even a better friend off of it! Hope you, Laura and the kids enjoy retirement. https://t.co/u07pqc7RvC

No matter how much of a jokester @TJLang70 was, he was the first person I looked up to my rookie year to learn how to be a true pro! Amazing player and even better person! #Legend

To my lil bro, @TJLang70
It was a pleasure and honor to call you a friend, lil brother & teammate. Love you lil bro. Congratulations on the retirement. Can’t wait to see the next journey of your life. #Family#PackerForLife#SBXLVChamps
Lil Bro watching over Big Bro pic.twitter.com/wh6QO8Ci95

It was a pleasure to lace ‘em up with ya T! Enjoy the next chapter! https://t.co/YzxE9nwwxf

Congrats my man on a great career! You never let my mistakes go unnoticed🤣 I appreciate the accountability #Respecthttps://t.co/Kfbdic6rPp