Eighth in a 10-part Packers draft position-preview series: Outside linebackers.

Jim Owczarski and Olivia Reiner discuss the Packers' need for an edge rusher after their free-agent signings of Za'Darius and Preston Smith. Packers News

Eighth in a 10-part Packers draft position-preview series: Outside linebackers.

GREEN BAY - After years of trying to draft and develop an outside pass rusher to play alongside — and then potentially replace — Clay Matthews, the Packers elected to buy replacements in free agents Za’Darius Smith and Preston Smith.

Matthews was allowed to leave via free agency and Nick Perry was released.

While the Smiths were signed to lucrative contracts, a need for youth and depth remains as Kyler Fackrell and Reggie Gilbert are entering their free-agent seasons. Defensive coordinator Mike Pettine isn’t afraid to mix combinations, and with Preston Smith’s ability to play inside, another top-flight pass rusher would always be welcome. 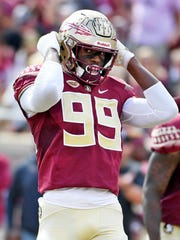 The good: Highly productive with 23 sacks, 38.5 tackles for loss and seven forced fumbles in three-year career. Has athletic ability to be used in coverage as well.

The bad: Needs to bulk up to not just handle an NFL pounding but also strong blockers. Would have to work on his run defense.

The good: A converted high school tight end, ran a 4.4-second 40-yard dash and an impressive 7-second three-cone drill. Was a two-time, all-SEC performer with 10.5 and 11.5 sack seasons.

The bad: Isn’t a refined pass rusher and sometimes can’t garner enough power out of all the speed he possesses. A taller player, has struggled sometimes with balance.

The good: Four-year player for a winning program and pass-rush productivity improved each season, ending with 11.5 sacks in 2018. Made 50.5 tackles for loss and forced five fumbles. Quick feet and knows how to use his hands.

The bad: May not be the best schematic fit for the Packers. Lacks tremendous burst and change of direction.

The good: Can get to the quarterback, beginning with a quick first step and refined spin move. Willing and able to chase down ball carriers. Had 15 career sacks, including 11 last season for the Gators.

The bad: Had issues with the way the Packers interviewed him at the combine, and said as much — but he did recognize he didn’t handle that situation correctly. Didn’t perform well in individual testing. Maturity concerns exist and his weight fluctuated quite a bit throughout college career.

The good: Ran a 4.5-second 40-yard dash and is a very good athlete. Played defensive end and linebacker and was always around the ball with 14 career sacks, 36 tackles for loss, two interceptions and seven forced fumbles.

The bad: Aggressiveness has been an issue in his career and his strength doesn’t always show up on the field, either.

With Matthews and Perry anchoring the edges of the 3-4 linebacking corps for a long time, the club never really addressed the position with significant draft capital in recent years. And after signing Za’Darius Smith and Preston Smith to massive free-agent deals, if the Packers look at outside linebacker in the draft it may be for depth or a swing on potential. When the club has wanted to draft a difference maker in the past, however, it hasn’t been afraid to do it in the first round.

A glance at what year the Packers players at the position are signed through and their age on opening day: