GREEN BAY – In another life, before the gravity and responsibilities of being the Green Bay Packers head coach, Matt LaFleur was a quarterback. So, yes, LaFleur understands the history of the team he now leads, but he’s also seen the franchise’s first great quarterback through that lens, as a passer.

And as a passer, LaFleur said, Bart Starr was something special.

“It was cool,” LaFleur said, “I got to see a lot of highlights of him. I was just looking at him as a thrower, and so many characteristics that we look for in passers, in quarterbacks, he was showing them. That nice, wide base, a natural thrower, extremely accurate. So that was pretty cool to watch.”

Starr, the Pro Football Hall of Fame quarterback and leader of Vince Lombardi’s five championship teams, died early Sunday morning in Birmingham, Alabama. His health had deteriorated since a near-fatal stroke in September 2014. Starr was 85.

RELATED: Packers providing hints about what to look for in 2019

“Everything I ever heard about Bart Starr, though,” LaFleur said, “obviously he was a great player, but from what people told me, he was an even better person. That’s pretty impressive, because he was such a great player.”

Receiver Davante Adams said he met Starr a couple of times. It was late in Starr’s life, but Adams said they were great encounters.

Adams already knew plenty about Starr before meeting him. He first realized the presence Starr continued to have on the Packers before ever playing a snap.

“So that was the first interaction that we kind of had. I ended up telling him about that later on, too. So, obviously, everybody’s sad around here. Hopefully, we can all move on at some point and keep him in our hearts."

In hopes of staying healthy for the first time in his three NFL seasons, Packers running back Aaron Jones did extensive work this offseason to overhaul his body composition.

Jones said he checked into the team’s offseason program with 5.3% body fat, down from roughly 11% last season. He said he still weighs the same, around 204 to 205 pounds, but less body fat means more muscle. 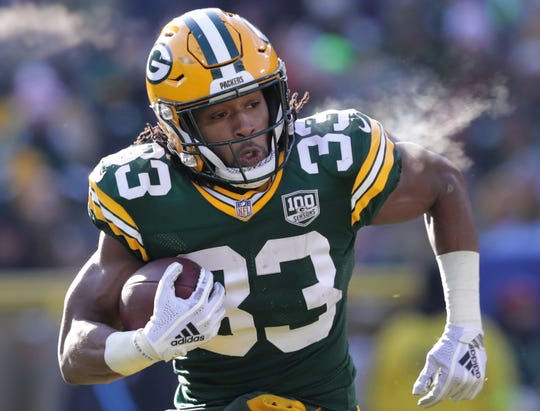 “I definitely am (stronger),” Jones said, before adding something opposing defenses certainly won’t want to hear. “Faster, too.”

It required self-discipline for Jones to trim the fat. He cut out chips from his diet, he said. He didn’t eat candy or cookies, and skipped the soda and Gatorade.

The decision to eliminate candy was hardest, he admitted. He’s long had a weakness for Gummy Bears, Twizzlers and Skittles.

The Packers won’t ramp up the physicality in their practices until they strap on the pads in training camp, but Jones said he’s already noticing a difference when he runs the ball.

“Running through arms out there,” he said. “In OTAs, somebody puts their arm out there and running through it, it won’t turn my body or torque my body like it used to. I just feel stronger in the legs.”

Safety Josh Jones, who missed the start of the Packers’ voluntary OTA period last week and reportedly wants to be traded, was not on the field or in the locker room in the open part of OTA on Wednesday.

Defensive tackle Mike Daniels and linebackers Ty Summers and Greg Roberts dressed but did not participate. Last week, tight end Marcedes Lewis and wide receiver Davante Adams missed the open OTA, but both were back on Clarke Hinkle Field working with the first-team offense.

“It’s good, it’s good to be out there with the team, get some game reps in and working with our new offense,” Adams said. “I know we did it in minicamp a little bit but getting in some of the new things. We’ve got a lot of stuff we’re installing right now. It’s pretty fast-paced and everybody is still learning. It’s good, though.”

For the first time this offseason, the Packers had field goal drills in an open practice session.

Mason Crosby, the incumbent, and newcomer Sam Ficken each kicked five field goals from equal distances and hash marks. Crosby was 4-for-5, missing wide right on a 45-yard attempt from the left hash, while Ficken made each of his kicks.

The start of competition was only a precursor to what awaits in camp.