In any other year, the Packers' defense being ahead of the offense in minicamp would be a surprise. This year, it was inevitable.

GREEN BAY – Without pads, it shouldn’t be a fair fight.

On one side of the line of scrimmage, you have the offense. Over there, players already know the plays. Which means they know where they’re going before the snap. Which means the defense should be a step behind.

Pads are the great equalizer. A press-man jam at the line of scrimmage here. A bull rush there. Once the pads are strapped on and football becomes football, anything goes. Without pads? Well, the offense should cruise.

Except that didn’t happen this week in the Green Bay Packers’ minicamp. In the two-minute drill, about the closest thing to real football that teams can muster without pads, the Packers' offense had five possessions the past two days. It produced just three points, a 41-yard field goal from Mason Crosby as time expired Wednesday.

The defense held the offense scoreless on four other possessions, including a three-and-out against quarterback Aaron Rodgers’ unit Tuesday.

“This is my first year,” 10th-season right tackle Bryan Bulaga said, “where I feel like the defense is ahead of the offense.” 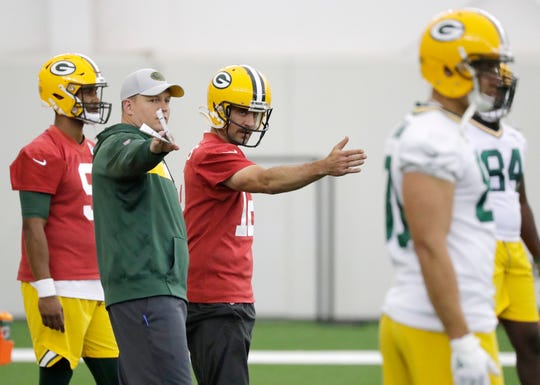 In any other year, that would be at least a surprise, and perhaps a cause for panic. This year, with this Packers team, it was inevitable. The defense is in its second offseason under coordinator Mike Pettine, benefiting from a solid foundation to build from this spring. The offense is going through its first install of new head coach Matt LaFleur’s system, and with it comes the natural growing pains of an unfamiliar playbook. Davante Adams, a Pro Bowler last year with 111 catches, 1,386 yards and 13 touchdowns, said it felt like being a rookie again.

That doesn’t mean the offense is taking its sluggishness lightly. There was Rodgers on Wednesday, letting trusted receiver Geronimo Allison hear it after a miscommunication between the two in a red-zone drill. Rodgers waited as Allison returned from the end zone after an incompletion, gesturing which way he expected the fourth-year receiver to run his route.

And there was LaFleur after practice, rolling his scooter over to the media horde, working over all the mistakes in his mind.

“There’s a long way to go,” LaFleur said after Wednesday’s practice inside the Don Hutson Center, “and I think our guys realize that. You know, just watching today without watching tape, there’s still a lot of sloppiness that we’re going to clean up moving forward. … That was the third day in a row we’ve done a two-minute operation, and the defense is definitely ahead of the game right now.

“It’s not as crisp, as smooth as I’d like our operation to be.”

In some ways, the defense being ahead of the offense is a good problem for LaFleur. It probably beats the alternative. A defense in its second year should be ahead of an offense in its first, pads or no pads.

Perhaps it’s a sign the defense is ready to break out under Pettine. That’s where the focus was primarily during the player-acquisition portion of this offseason, with the likes of Za’Darius Smith, Preston Smith, Rashan Gary, Adrian Amos and Darnell Savage Jr. providing needed reinforcements.

Bulaga, asked how the defense has handled its rare offseason success, quipped there’s been “a lot of talk” coming from across the locker room this spring. But he doesn’t mind seeing the improvement from across the line of scrimmage. He was here for the 2016 NFC championship game in Atlanta.

Perhaps now the Packers' defense is finally ready to hold its own. But sooner or later, the offense should catch up.