GREEN BAY – Ka’Dar Hollman might have taken the road less traveled to get to the practice fields adjacent to Lambeau Field, but in short order the rookie cornerback out of  Toledo has made his way to a level playing field.

And that’s all he’s ever sought.

Hollman’s journey to draft night was well-chronicled. The Green Bay Packers’ sixth-round pick last April was on the assembly line examining loaves of bread to make sure they were edible. He loaded and unloaded trucks of bakery and coffee at Dunkin' Donuts in the tri-state area of New York, New Jersey and Connecticut. And while Peyton Manning and Ickey Woods may have made the slicing of deli meats ubiquitous, Hollman was actually the one cutting slices of ham, turkey and provolone — all with the dream of being the NFL player in that scenario.

“Those jobs right there just made me more motivated because those are jobs I didn’t want to do my whole life,” Hollman said. “There were people I was working with telling me how they’ve been working there for 30 years, and I’m like, this is not something I want to do when I get older. They just gave me more motivation and drive to get to where I want to be at.”

He wasn’t recruited out of Burlington Township High School in New Jersey with admittedly poor SAT scores, so he got himself to Milford Academy, a prep school in New York state. Again, his test scores weren’t quite up to par. So it was back to a regular life, working whichever job he could find. 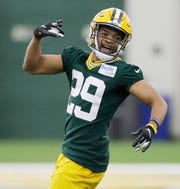 “I felt like there were a couple days, I would wonder to myself — dang, am I supposed to go D-1 in football?” he said. “I just had times like that when real life hit me and I had to get through it. Self-motivation.”

Letter after letter went out across the country, asking for one chance.

He got one reply, from Toledo.

He could walk on.

“I just needed the opportunity,” Hollman said. “When I had that opportunity, it wasn’t something I could not take. I knew I had to take it and show what I can do.”

He redshirted in 2014 and played in two games in 2015, paying his own way. Hollman earned a scholarship in 2016 and started eight games and then became a full-time starter in 2017. According to NFL.com, he allowed just a 40% completion rate in 2018 and led the Mid-American Conference with 12 pass breakups.

SILVERSTEIN: Aaron Rodgers has yet to put his stamp on new offense

But, he wasn’t invited to the NFL scouting combine. He didn’t have to write letters to NFL scouts but still had to show what he could do at his pro day. So all Hollman did was run a 4.39-second 40-yard dash, post a 38-inch vertical jump and run a 6.81-second 3-cone drill. Had he participated in the combine, the 40 time would have been fourth-best, the 3-cone fifth-best and the vertical tied for 12th.

The film, the testing mattered. But how Hollman tried for years to even things out for himself made him an attractive draft pick for the Packers.

“How these guys are wired, there’s a lot of adversity in our league and you have to have enough toughness, mental and physical to get through it,” Packers general manager Brian Gutekunst said. “And so as we go through our studies on different guys, the history of them being able to fight through adversity and their determination, it matters.”

All of that, to date, has led to a strong impression on the practice field.

“He’s intense,” Packers defensive coordinator Mike Pettine said of Hollman. “You can tell he loves football. He’s a guy that’s been real good at the man, press-man aspect of it. I just think he’s, like all rookie corners, coming in and having to learn some of the intricacies of the zone stuff, but I just think there’s times where he’s had practices where you have to really go back and look to see if a ball even got caught on him.”

Hollman appreciated the praise but admitted still needs to master the playbook. And he knows there’s a roster battle to come. Because of his sixth-round status and the players ahead of him, the odds of making the team feel long. But when Hollman runs out onto Ray Nitschke Field for the start of training camp July 25, they won’t feel that way.

“When you actually get somewhere, it made me not take nothing for granted. Nothing,” he said. “I know when you have stuff like that you can’t take it for granted. You have to be humble. You can still enjoy it but take every day for what it is and be grateful.”