The Packers’ offseason program has been filled with off-the-field bonding activities designed to build togetherness.

GREEN BAY – Davante Adams had all the bravado of a man who could not lose. He had a coffee cup in one hand, a basketball in his other, as he approached the new hoop Green Bay Packers coach Matt LaFleur had installed near the team meeting rooms.

Adams’ affinity for basketball is no secret. Thanks to social media, his high-flying dunks posted to Instagram and YouTube have circulated inside the Packers locker room. But Adams, though lightly recruited, did not play college basketball. His opponent, tight end Jimmy Graham, did.

Such audacity was easy bait for the teammates gathering around.

“They’re clowns, man,” Adams would joke. “They couldn’t wait for me to get up there and not perform the way that I’m supposed to.”

Eventually, Adams placed the coffee cup aside. It didn’t help. Graham won their shooting contest, advancing to the next round. 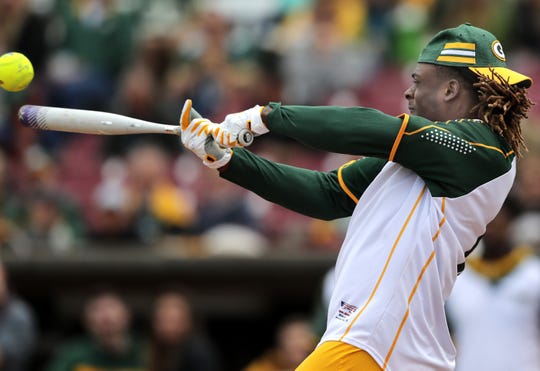 Adams later would catch the harshest criticism ever levied from his MVP quarterback.

Ever since the Packers’ offseason program opened in April, free time has been filled with activities like this. Not every outing is built on competition — several players got an early viewing of the new John Wick movie this spring — but they’re all designed to build camaraderie inside a locker room unaccustomed to so many new faces.

There were years late in Ted Thompson’s tenure as general manager when the Packers practically had their entire 53-man roster, minus a new crop of draft picks, left over from the previous season. This year is very different.

Along with a new head coach and several new assistants, the Packers signed four marquee free agents this spring, the strongest sign yet of new general manager Brian Gutekunst’s emboldened stance toward the open market. Gutekunst drafted eight players a month later, of which a handful could field significant roles.

It has been years since the Packers had so much turnover. Thompson long prioritized maintaining order inside what can be a delicate locker room environment. Building chemistry within a team is an inexact science. Consider new right guard Billy Turner’s description between a good and bad locker room: “Just guys vibing and jelling together, being able to shoot the (expletive).” Add an individual who doesn’t fit, and things can get out of balance quickly.

Out of necessity, Gutekunst disrupted the Packers’ locker room climate this spring. In turn, there’s been a renewed emphasis on developing chemistry this offseason, because so many players lining up next to each other this fall will be doing so for the first time.

That can sound like a cliché — locker room chemistry — coaches and general managers use far too often, but of the several Packers players interviewed for this story, not a single one called it a nonfactor for successful teams. Most acknowledged they had been inside good and bad locker rooms, and seen firsthand the difference it can make to winning and losing.

“The gap in talent around the league is not too far,” safety Adrian Amos said. “Everybody is good, everybody has great players. It’s just about coming together, and how those players mesh together, how players work well with each other. That’s why you see teams that maybe their roster may not seem like they should be that good, but they are that good, just because of how they work together, how they play together.

Late in Mike McCarthy’s tenure, players occasionally groused about a lack of accountability. Whether it was former cornerback Damarious Randall questioning coaches for putting players on the field after repeated mistakes, or former safety Ha Ha Clinton-Dix openly requesting the front office to add veterans to increase the level of maturity, the complaints were easy to find.

Packers President/CEO Mark Murphy referenced those complaints when he announced LaFleur as the new head coach, saying players told him “a complacency had set in.”

Accountability is most accessible from coaches, whose job is to get the best performance possible from players. The best teams, however, have the ability for teammates to self-police in a positive and effective way. Weak locker rooms can struggle with peer-to-peer accountability. Just last year, such an issue occurred when several teammates anonymously questioned former running back Ty Montgomery’s motivations for ignoring orders to take a touchback late in a game against the Los Angeles Rams.

It’s unclear why teammates chose to indirectly address their frustrations, rather than going straight to Montgomery. The disconnect was amplified one day later when Montgomery openly admitted he could no longer trust his peers inside the locker room. He was traded to the Baltimore Ravens the next day.

“With more trust,” said Amos, who played with the Chicago Bears last season and knows nothing of Montgomery’s situation, “it’s easier to hold somebody accountable. If I know me and you are cool with each other, I know that if I lean on you and get on you, you’re not going to get down in the dumps because you know it’s coming from a good place. I just want to see you get better.”

The Packers’ offseason program, a collection of workouts, meetings and practices scheduled around plenty of free time, is designed in part to build togetherness. Think day camp for adults. Players have responsibilities they must meet, but also ample opportunity to hang out with teammates away from team facilities.

Packers players have long participated in offseason fishing excursions in Door County. Others break away to Chicago for an evening, enjoying the city. Around Green Bay, there’s a team-wide bowling outing each Tuesday. Some players, such as quarterback Aaron Rodgers, right tackle Bryan Bulaga, and kicker Mason Crosby, have memberships at local golf clubs, organizing foursomes when time allows.

SILVERSTEIN: Aaron Rodgers has yet to put his stamp on new offense

Spring is also a fertile time for charity events both around northeast Wisconsin (the Packers' annual charity softball game, for one) and in hometown communities across the country, and players notice which teammates attend.

“You do one of those events with someone,” left guard Lane Taylor said, “if it’s someone you don’t know, a rookie or a second-year guy, a DB or something, you’re all kind of cool from then on out.”

Nothing in the NFL is more essential for winning than talent. Skill with consistency is the ultimate recipe for championships. But it’s a long season. In a sport often defined by injuries, continuity can be fleeting.

When something slips on the field, having a strong locker room is the best way to get a team back on track.

“I think it’s more do you have any bad apples in the locker room,” Taylor said, “more than anything. Because, it’s like, I don’t have to be best friends with Jaire Alexander for us to be good, and vice versa, or anything like that. But I think if you have a locker room that’s really bought into the team and winning and doing the right things, that just really kind of bonds everyone together. Everyone trusts each other, and kind of lay it on the line for each other.”