Seventh in a 13-part series on the opponents the Green Bay Packers will face during the 2019 regular season.

Seventh in a 13-part series on the opponents the Green Bay Packers will face during the 2019 regular season.

GREEN BAY - Welcome to the circus.

On paper, the Oakland Raiders have the necessary ingredients to be relevant, if not a contender. They have a franchise quarterback in Derek Carr. They have a new star receiver in Antonio Brown. They have a reinforced defense — after signing defensive tackle Johnathan Hankins, safety Lamarcus Joyner, linebacker Vontaze Burfict this spring — that should at least finish better than their 32nd overall ranking from last year.

On paper, this is a team that should compete.

But there’s always something funky in Raiderland. Jon Gruden got a $100 million deal last year, then promptly dismantled the roster and led a team two years removed from 12-4 to a 4-12 record. The Raiders hired new general manager Mike Mayock from the NFL Network booth this spring, and he promptly surprised everyone by drafting Clemson’s Clelin Ferrell fourth overall. Oh, and the Oakland Raiders are a year away from becoming the Las Vegas Raiders, moving to a town where the circus never stops. 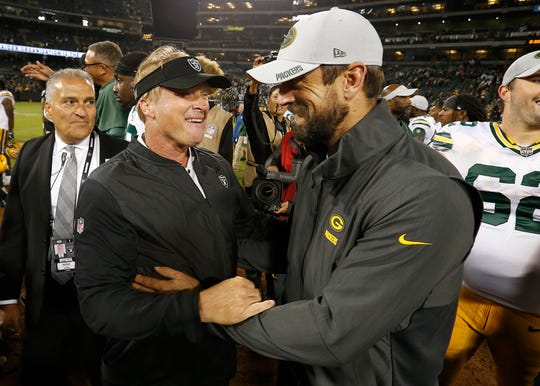 So while there’s reason to believe the Raiders should be improved this season, the safe bet might be to expect more of the same, dysfunctional mess it experienced last fall.

Reports out of Oakland are that Carr and Brown are already building chemistry this offseason. That’s a promising sign, given how Brown’s time in Pittsburgh ended. It’s also important, given the stagnant development Carr has shown over the past few years. A Pro Bowler three straight seasons before 2018, it wasn’t that Carr regressed last season. His 93.9 passer rating was 7.5 points higher than in 2017, when he was a Pro Bowler. He even had his first 4,000-yard season. But there’s no question Carr has struggled to be the same quarterback the past two years he had become before breaking his leg late in 2016. That season, Carr threw for 28 touchdowns with six interceptions and a career-high 96.7 rating. The Raiders were also 12-3 in his starts. It’s a quarterback league, and teams win or lose on how that position performs. If Carr can’t build on the playmaking and efficiency he showed in 2016, the Raiders are going to have a rough time.

There will be no reunion with Jordy Nelson this fall. The Raiders released the longtime Packers receiver last spring, midway through the two-year deal he signed in 2018. At age 33, Nelson was no longer the player he was earlier in his career. He never fully recovered from the torn ACL that cost him all of 2015, the injury stripping him of his game-breaking speed. He had some production in Oakland, catching 63 passes for 739 yards and three touchdowns, and the Raiders paid him a $3.6 million roster bonus in December. But after the Raiders traded for Brown and signed Tyrell Williams in free agency, they quickly released Nelson, who plans to officially retire as a Packer in August.

Gruden did what Pro Football Hall of Famer Tony Dungy couldn’t at Tampa Bay, leading the Bucs to a Super Bowl title. He became football’s most renowned analyst a few years later, working the "Monday Night Football" booth for ESPN. Those two items gave Gruden a notoriety most football coaches never experience. The Raiders hoped to cash in on that cachet — and probably win some games, too — when they offered him the record-shattering, 10-year, $100 million contract. They turned over their football operation to him, believing he could lead the Raiders to a place they hadn’t been since losing to his Bucs in Super Bowl XXXVII. That kind of contract is a risk with anyone, but it’s especially a gamble with a coach who had been out of the profession for a decade. And while the Bucs were rarely bad under Gruden, they reached the playoffs only three times in seven years. Gruden never led the Bucs to a playoff win after the Super Bowl title in his first year, and he was fired after the 2008 season. All of that is to say a 4-12 record probably didn’t sit well last year. We’ll see what becomes of Year 2.

On the horizon: at Los Angeles Chargers, Nov. 3.

Last meeting: Before the Packers jettisoned him to Cleveland, back in his rookie season of 2015, there was reason to believe first-round pick Damarious Randall was quite a find. In fact, the future looked bright with Randall at cornerback, never more so than when Randall returned an interception 43 yards for a first-quarter touchdown in Oakland on Dec. 21, 2015. The first touchdown of Randall’s career gave the Packers a 14-0 lead, and they held on to win 30-20. Aaron Rodgers struggled that day, completing 22 of 39 passes for 204 yards, one touchdown, one interception and a 68.8 rating, but the Packers' defense — led by Randall’s pick — was more than enough to carry the way to victory.