At NFL.com, they're ranking the top 10 players at each position as part of their NFL Top 100 players listing for 2019. At wide receiver, the Packers' Davante Adams checks in at No. 9.

Adams suffers from the "GOAT QB Complex," a made-up syndrome that occurs when great skill-position players are overlooked because they play with one of the best quarterbacks in the game. (Even when Jordy Nelson was at his best, he was fully overshadowed by Aaron Rodgers.) Yet if you look beyond the quarterback, Adams has improved each season, with his best coming in 2018 (111 receptions for 1,386 yards and 13 touchdowns). He's evolved into a dynamic red-zone threat and Rodgers' most-trustworthy target. 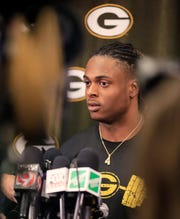 Julio Jones, DeAndre Hopkins and Antonio Brown are three of the most dynamic playmakers in the NFL today. How do they stack up against each other? @nateburleson ranks the top 10 receivers heading into the 2019 campaign.https://t.co/blr42vZvoIpic.twitter.com/GM33X96BMj

Rookie Manny Wilkins is becoming a factor in the Packers' backup quarterback battle:

He scrambled for a touchdown during red-zone work Saturday. https://t.co/JfqkkJCkkD

The Packers' offense still has plenty of work to do. Tom Silverstein and Jim Owczarski break it down in their first podcast of 2019 training camp:

It's evident there's a lot to be done offensively. https://t.co/YTwlbbwvvE

Video to watch: @ReinerOlivia and @TomSilverstein chat about who might fill the #Packers wide receiver positions after the first four. https://t.co/62qj1B0T5k

Z'Darius Smith will be moving all around the Packers' defense, writes Jason Wilde of the Wisconsin State Journal:

In @WiStateJournal and on @madisondotcom ~ Matt LaFleur knows firsthand how Za'Darius Smith's versatility can wreck an offensive game plan. Now, the #Packers hope moving 'Z' around their defense has the same impact on this year's opponents. https://t.co/6XwXhykKqo

We've heard about the Packers' poor draft classes in recent years, but the 2016 draft is bearing fruit, writes Rob Reischel for ForbesSports:

The #Packers' 2016 draft class was terrific ... and is a big reason Green Bay's defense is thinking big in 2019. My story at @ForbesSports.https://t.co/Ius3pZgz7g

Kenny Clark's improvement as a pass rusher enables him to climb on the Pro Football Focus list of top 10 interior defensive linemen.

After earning an 87.8 overall grade and an 89.1 run-defense grade in his sophomore season in the NFL, Clark took a significant Year 3 leap as a pass-rusher. He went from 67.9 and 69.6 pass-rush grades in 2016 and 2017, respectively, to an astounding 88.8 pass-rush grade in 2018. He also finished the year ranked 11th in pass-rush win percentage (14.1%) and ninth in total pressure percentage (12.0%). Originally knocked for his undersized frame and short arms, Clark has risen above such critiques and now stands tall as one of the best defensive interiors in the NFL.

The #Titans' Jurrell Casey and #Bengals' Geno Atkins round out PFF's list of the top-10 interior defensive linemen heading into the 2019 NFL season. pic.twitter.com/igi3Iu6L1W

If you are going to Lambeau this year, the new U.S. Cellular Loft adds some amenities. #Packershttps://t.co/QC9U94vXoSpic.twitter.com/Gi0gnU2P1u