Jamaal Williams doesn’t ever want to get knocked out again, but he doesn’t think the NFL needs to bar the guy who did it from playing.

GREEN BAY - Green Bay Packers running back Jamaal Williams doesn’t ever want to get knocked out again, but he doesn’t think the NFL needs to bar the guy who did it from playing.

Williams was cleared from the concussion protocol and in uniform with his teammates at practice Thursday, two weeks from the date in which Philadelphia Eagles defensive end Derek Barnett made helmet-to-helmet contact with a helpless Williams at the end of a running play.

Barnett was flagged for unnecessary roughness but officials did not feel the hit warranted his ejection. However, the league later fined him $28,075 for helmet-to-helmet contact with Williams, who was being held up by two other Eagles at the time Barnett hit him.

Williams, who spent the night in the hospital, did not receive a call or text from Barnett but said he wasn’t looking for one. 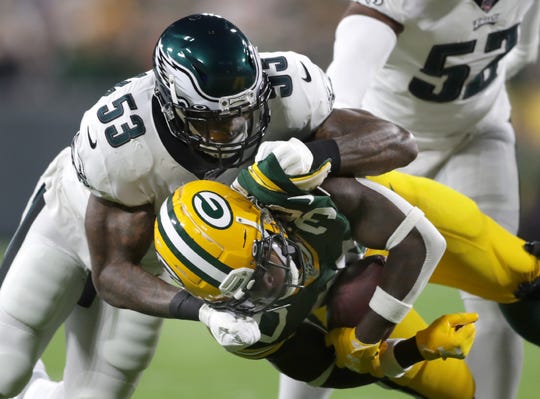 “It’s just the past now, it’s just something you have to learn from and just know things like this happen. Hopefully, he learns from this play and (does) not do it again and keeps playing his type of play but smarter. Keep staying aggressive like he is, he’ll be fine.”

Williams said he was knocked out for a few seconds and didn’t really begin to remember what happened until he got to the hospital. He said he watched the play on video later on and came to the conclusion that it was just part of the game.

“I’m not mad at him for it,” Williams said. “He’s just playing defense. That’s what defense does, they have to go to the ball. At the time I was still fighting for yards and stuff like that. At the time, he didn’t know what was happening. He just turned around and seen me fighting for yards, so he was just trying to go make a football play.

“It was just bad location where our helmets hit.”

Williams said he felt fine at practice and was looking forward to returning Monday night when the Packers host the Detroit Lions.

Aaron Jones is the starter and No. 1 option in the running game, but Williams will probably jump back into the No. 2 spot ahead of Tra Carson, who was signed from the practice squad last week.  Not counting the Eagles game in which he had one carry, Williams has averaged 8.67 carries per game and gained 87 yards. He has eight catches for 55 yards and a touchdown.

In the last two games, Jones has played 118 of 155 snaps, carried 32 times for 128 yards and five touchdowns and caught 13 passes for 112 yards. Williams should help take some of the load off Jones.

“I feel like me and Aaron have gotten real comfortable in this offense and just playing football in generally,” Williams said. “Now, we can just go out there and play.”

Tackle Bryan Bulaga credited practice squad linebacker Randy Ramsey with helping him hold off some of the top pass rushers in the game this season.

Through five games, Bulaga has faced Chicago’s Khalil Mack, Minnesota’s Danielle Hunter, Denver linebacker Von Miller, Dallas end DeMarcus Lawrence and Barnett and has not given up a sack. He and rookie left guard Elgton Jenkins are the only starting linemen who haven’t given up a sack this season.

Bulaga said that each week he asks Ramsey, a practice squad outside linebacker, to imitate some of the moves the veteran tackle might see that week. He said the undrafted rookie from Arkansas, whom the Packers seemed to like a lot in training camp, has helped him immensely.

“He’s a very athletic dude,” Bulaga said. “He’s able to pick to pick up movements and watch tape on guys and kind of mimic guys. He’s not going to be 100% because he has his own style as well. But he’s done a great job up to this point giving me looks I’m going to see in a game.”

Packers coach Matt LaFleur amended his practice schedule this week to help give his team extra time to recover from a physical game in Dallas last weekend, but wide receiver Davante Adams still was wearing sweats while his teammates warmed up Wednesday on Clarke Hinkle Field.

“I think he’s getting a little bit better each and every day,” LaFleur said of Adams.

Quarterback Aaron Rodgers was listed as a limited participant with a knee issue, joining a list of 10 other players with such a designation.

Limited participants due to veteran rest were Bulaga and tight end Jimmy Graham.

Williams has cleared the concussion protocol after being injured against the Eagles and was a full participant.

Others who were unable to practice included safety Darnell Savage (left ankle) and tight end Robert Tonyan (hip). Also out was cornerback Tony Brown, who suffered a hamstring injury against the Eagles.

The Packers consider the edge of a manageable third-down distance at six yards. From third-and-7 and longer the club has run 35 plays and has converted a first down seven times (20%).

LaFleur acknowledged some negative run plays have helped contribute to longer third-down conversion attempts, but usually the culprit is a penalty. Fourteen times the Packers have been flagged to push them back beyond the third-and-manageable range.

"Well, if I knew right now we wouldn't be in those situations,” LaFleur joked when asked if he had an answer for those issues. “But, no, there's things that we can do from a coaching perspective, from a play-calling perspective that need to be better. But also, we've got to make sure we're not getting penalties. And then there were a couple negative runs that really set us back. It's just being mindful of what we're asking our guys to do on first down so we don't get into those get-back-on-track situations."

And as one would expect, the further away the first down marker the less likely the conversion:

What’s interesting is that on the Packers’ 14 touchdown drives they tend to avoid third down altogether with high early down efficiency and plays of 10-plus yards.

Not including defensive penalties that led to first downs, the Packers have run 79 plays on those touchdown drives. They have gone 7-for-7 on third down, and only one time did they have to convert anything longer than third-and-6, which was a 26-yard completion on third-and-7 against the Eagles.

Kicker Mason Crosby has attempted eight field goals, and on those drives the Packers have been faced with 13 third downs. A defensive penalty gave them one first down and the Packers have gone 4-for-12 on the others. Three times they converted with seven or more yards to go.

“Where we need to show the most improvement is getting out of long-yardage situations and getting back on track,” LaFleur said Monday. “Whether we have a negative run or a negative play on first down, or we get a penalty, or we get into those second-and-longs and are then faced with the third-and-longs, it’s tough to convert in this league. So there’s a lot of room for improvement on third downs for us.”