What you need to know about the Packers-Raiders game Sunday at Lambeau Field.

WHEN: Noon CT on Sunday.

1. AT A STANDSTILL: Ever since quarterback Aaron Rodgers scrambled around for 46 yards and made several big completions outside the pocket against the Philadelphia Eagles, opponents have decided not to take any more chances. In the last two games, the Detroit Lions and Dallas Cowboys sent more than four rushers at Rodgers just 13% of the time, preferring to have seven or more defenders with eyes on the quarterback. Oakland may do the same. “We have to keep Rodgers somehow in the pocket,” Oakland coach Jon Gruden said. “We just can’t let this guy create second-reaction plays.” Rodgers hasn’t put up great numbers against minimal pressure, but he has been efficient enough to win, completing a combined 46 of 73 passes for 521 yards and two touchdowns with one interception (87.8 rating) in the two games. 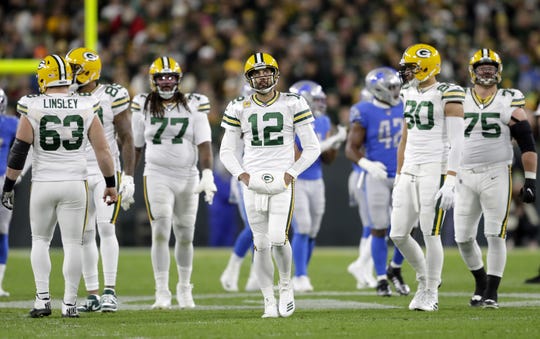 2. MOVING DAY: When the Raiders have their full complement of starters on the offensive line, they bring 1,680 pounds to the table. Against the Chicago Bears, who rank fifth in the NFL in rushing defense, the Raiders pounded them with 39 carries for 169 yards and three touchdowns. The Packers played much better against the run last week against the Lions, but they still rank 23rd in yards allowed and 26th in yards per carry allowed. “Coach Gruden, he always wants to have old-school fundamentals and be able to line up, when they need to line up, and run the ball downhill,” defensive coordinator Mike Pettine said. “But at the same time, they’re doing a lot of things that are cutting edge in the league as well that forces defenses to think and process and make sure their eyes are in the right place. It’s a difficult offense to defend.”

3. GRANT IN AID: With their wide receiver and tight end groups hurting, the Packers signed veteran receiver Ryan Grant this past week, hoping they could integrate him into the offense quickly enough to play Sunday. More than likely, the staff will come up with a package of plays he can run based on his previous knowledge of the offense, which comes from time he spent in Washington when Rams coach Sean McVay was offensive coordinator. There are a lot of similarities between McVay’s and Matt LaFleur’s offenses, so that helps. But all the signals, snap counts and play calls are different, so there’s not a lot of use in overloading Grant. “You want them to be able to play fast when they’re out there and not be thinking about what they’re doing,” offensive coordinator Nathaniel Hackett said. “You just want it to come naturally and that’s really just time.”

4. LONG DISTANCE: The Packers are supposed to be a team that doesn’t give up a lot of long passing plays, but they lead the NFL in completions of 40 or more yards allowed with eight. They have given up five of those in the last two games, three of which went for touchdowns. Overall, the Packers rank 17th in yards allowed per pass attempt (7.5) and fifth in opposing quarterback passer rating (77.0), but the long completions are something to keep an eye on. The increased emphasis on stopping the run could be part of the reason for the barrage. More balance may be needed. “We’re not going to try to do anything extra and get out of our assignment and do anything to hurt the defense,” outside linebacker Preston Smith said. “We know if we stay assignment-sound, we can have great results.”

5. HOME-FIELD ADVANTAGE: The Packers are concluding a stretch in which they are playing five of six games at home. They are one of just four teams in the NFL with three home victories and with a victory over the Raiders would become the only team with four. On the other hand, the Raiders are in the middle of a six-week stretch in which they don’t play at home (including a bye). They played at Minnesota and Indianapolis in Weeks 3 and 4, vs. Chicago in London in Week 5 and then play at the Houston Texans in Week 8. They are 2-1 away from Oakland, so the road has not been a disaster for them. “I’m jealous,” Gruden said of the Packers’ schedule. “We’re in the middle of I don’t know, one of the greatest road trips in the history of football. I’d like to thank everybody for making this possible.”

It’s hard to pick against the Packers these days because their defense keeps them in every game and their offense does just enough to win. The Raiders are a mercurial team, but they’re coming off a bye and can’t be written off. Home field stands to be the difference. Packers 27, Raiders 23

Oakland has had extra prep time because of last week’s bye and is facing a thin Packers receivers corps that will be without Davante Adams and possibly Marquez Valdes-Scantling and Geronimo Allison. But the guess here is that coordinator Mike Pettine’s defense will hold up well enough against the run, and the Packers will win at home as a 5½-point favorite. Packers 24, Raiders 17

For the second straight week, the Packers need to scrape together enough offense despite their depleted receiving group to beat a team that carries optimism out of its bye. The Packers are too banged up to blow anyone away, but expect the home team to win late behind enough production from the run game and solid defense. Packers 23, Raiders 20

With a limited group of pass catchers, the Packers will have to rely on a burgeoning ground game and the defense (again) to pull out another nail-biter. Packers 19, Raiders 17

The Packers have found a variety of ways to win since Week 1 when I didn’t think they could do it. I’m not ready to count them out just yet. Even potentially without their top receivers, the Packers will still get it done. Packers 27, Raiders 20

Can the Raiders really be expected to win three straight games away from home? They ran all over the Colts' and Bears' defenses and will try to do the same in Green Bay. Which no-name receiver will Aaron Rodgers make a star out of this week? Packers 20, Raiders 16