The Green Bay Packers are on their way to regaining full health, but they might not get there before Sunday.

Davante Adams’ injury is forcing the Packers to distribute the ball to other players like Lazard and Valdes-Scantling. Packers News

GREEN BAY - The Green Bay Packers are on their way to regaining full health, but they might not get there before Sunday's game at Kansas City.

Safety Darnell Savage, sidelined since injuring his left ankle against the Dallas Cowboys in Week 5, returned to practice and took part in all the individual drills during periods open to the media.

Later in the day, Savage was listed as a full participant, which is a fairly good sign he'll be available Sunday. The practice only consisted of three jog-through periods, so he'll have to still make it through a padded practice Thursday.

Receiver Davante Adams tested out his right turf-toe injury in pre-practice warmups, although there was no cutting or full-speed running involved. It was the first time Adams had taken part in any segment of practice since injuring his toe against Philadelphia in Week 4.

Taking part in warmups is a long way from playing in a game, but it’s the first concrete sign that Adams is doing on-field work and if things go well, he could be cleared to do more as the week goes on.

He was listed as "did not participate" because he didn't take part in any drills.

Coach Matt LaFleur went so far as to say Adams could be a game-time decision Sunday, but he added he wasn't sure what the medical staff was thinking post-practice. 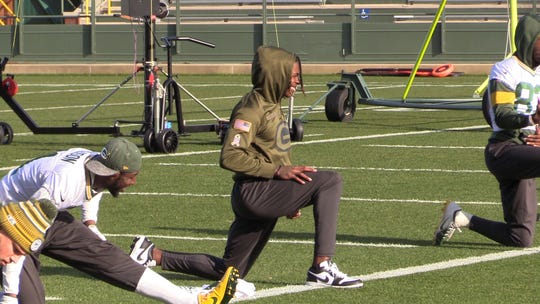 Davante Adams stretches at practice after sitting out with a turf toe injury for several weeks. Adams did not participate in team drills. (Photo: Olivia Reiner)

Also returning to practice was tight end Robert Tonyan, who has missed the last two games with a right hip injury. Tonyan tried to return to practice last Wednesday as well but was shut down when it didn’t go well.

Quarterback Aaron Rodgers (knee) was listed as a limited participant.

Others who were limited due to injury were: tight end Jimmy Graham (ankle) and cornerback Tramon Williams (knee).

Packers wide receiver Davante Adams stretched with the team for the first time since suffering a turf toe injury Week 4 vs. Philadelphia. pic.twitter.com/brh9z6jyGs

Packers on standby for trade help

The Packers were one of the first teams to participate in the 2019 trade market for wide receivers when they sent Trevor Davis to Oakland back on Sept. 18 for a late-round draft pick (New England was the first to make a receiver move in season, trading Demaryius Thomas to the New York Jets on Sept. 10). But since the Davis trade, three other pass catchers have been moved:

Adams returned in some fashion to the practice field Wednesday, and in the last three weeks Packers receivers have improved steadily in the production department:

"We talk on a daily basis, and we're always looking for ways to improve our football team,” LaFleur said about his conversations with general manager Brian Gutekunst. “But I will say I do have a lot of confidence in the guys that we have here. We did OK the other day. I know every game it's week to week and you're only as good as your last game. But we're exploring all options."

Not only did Rodgers have a perfect passer rating last week, and not only did he attain that historic mark without top receiver Adams, but the Packers quarterback did so without being 100 percent healthy.

Rodgers popped up on the injury report with a knee issue after the Packers returned from their win at the Dallas Cowboys. It’s nowhere near as severe as the tibial plateau fracture that plagued Rodgers throughout the 2018 season, but still significant enough to limit Rodgers at practice the past two weeks.

“I think it was just kind of the combination,” Rodgers said, “of the wet weather we’ve been having, we were having at that time in Green Bay, going indoors a bunch and playing on the turf down there. Some of us older guys don’t always react super positively to a lot of days on turf.”

A week ago, LaFleur issued somewhat of a challenge to Allen Lazard after a four-catch, 65-yard effort against Detroit that included an impressive 35-yard touchdown reception on just 17 snaps: “Anybody can do it one time, and that’s what we say. But now you’ve got to do it each and every time. That’s the expectation, and that’s the standard.”

The second-year receiver out Iowa State met that challenge Sunday against Oakland.

Lazard led all Packers receivers in snaps played with 51 and came away with three catches for 42 yards. One reception was a contested, leaping 26-yard effort on the sideline that set up a touchdown. His lone blemish was a drop.

“It felt great obviously to be back out there, especially just knowing what my role was going to be this week,” Lazard said. “It gave me a little more confidence, a little bit more stability and trust in what I can do. Other than that one drop I think I played a pretty good game. Still a lot of room for me to improve and as an offense still too. I left a couple plays out there. A season high in points, so not bad.”