LeRoy addresses the inaction before the NFL trade deadline and whether GM Brian Gutekunst dropped the ball in not adding another receiver. Packers News

We'll start with ESPN's Cameron Wolfe presenting the NFL’s "Quarter 2 unheralded ballers," the no-name players who seemingly come out of nowhere to deliver clutch performances. Packers receivers Allen Lazard and Jake Kumerow make the list for stepping in for the injured Davante Adams and producing a combined 18 catches for 268 yards in the last three games. 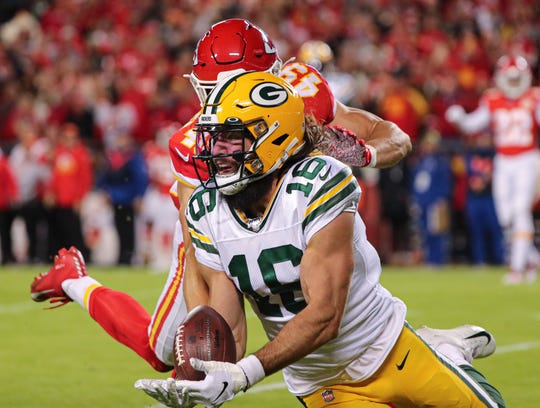 Why it matters: Forced into action because of Davante Adams’ Week 4 turf toe injury, Kumerow (a second-year undrafted player) and Lazard (an undrafted rookie) have stepped up to the plate big time, helping make the 7-1 Packers one of the NFC’s elite teams.

“I really am proud of the way that Jake has played and Allen has played,” quarterback Aaron Rodgers said.

Adams should return sooner than later, but the production of Kumerow and Lazard in a time of need could have a lasting impact on the Packers' offense.

Quarter 2’s Unheralded ballers squad is out!! A look at the team of players with ‘who was that’ performances that caught our eye:https://t.co/Jz5mvxw2sT

Tom Silverstein explores how losing Davante Adams turned out to be a positive development for Aaron Rodgers and the Packers' offense:

For subscribers: The #Packers rank second behind the #Chiefs in yards after the catch. https://t.co/2WjlE1BnJi

The Packers passed on making any deadline deals but did make some roster moves:

The #Packers made some moves on Tuesday, but not the moves fans were anticipating. https://t.co/aaprj7shwl

The Packers' path to the No. 1 spot remains barred by three teams in the major national power rankings. Here's a sampling, topped by this from Dan Hanzus of NFL.com:

"They've turned that guy into a superstar." Those were the words of Around The NFL Podcast colleague Chris Wesseling as we watched Aaron Jones rumble to the end zone with the Packers' game-winning score on Sunday night against the Chiefs. There's so much to like about Green Bay right now, but Jones' ascent to legit dual-threat monster has opened up a surging Packers offense that was expected to suffer when receiver Davante Adams went on the shelf with a toe injury. With Adams out since Week 4, Aaron Rodgers and first-year coach Matt LaFleur have essentially turned Jones into a productive wide receiver. According to Next Gen Stats, Jones caught four of five targets aligned wide for 127 yards and a touchdown against the Chiefs. That's 53 more yards than the next-closest running back lining up out wide in a single game since the Next Gen era began in 2016. Good teams find a way to make the most of their personnel.

You can find the entire rankings here (followed by a few others):

The 49ers are pushing the Patriots for the top spot in our latest power rankings.

Week Nine power rankings, Patriots and 49ers and Everyone Else edition https://t.co/TNuKSbXL83

The Aaron Jones hype train is picking up speed:

What a trio of passes for Rodgers in finishing off the Chiefs:

There certainly was no shortage of air time for the injured Chiefs quarterback Sunday night:

The Packers should feel right at home when they visit the Los Angeles Chargers:

Fans who don't wear green and gold will stand out at the #Packers' game in Los Angeles this week. https://t.co/R3ZNpEHzWz

Jim Owczarski provides a sneak peek at the Chargers:

The Packers will travel to the West Coast for the first time in 2019 to take on the Chargers. #Packers#GBvsLAhttps://t.co/8G7tgVPMyt

The Packers will see a familiar face in the Chargers' secondary:

Casey Hayward Jr. was a #playmaker in Week 8! 🔒⬇️ pic.twitter.com/dbqewYQ2SC

"Look Aaron Rodgers right now at the half way point, you'd have to say he's a favorite for that MVP award."

Where does Rodgers stand in the MVP race? NFL.com panelists discuss:

Who is leading the MVP race? What's the current makeup of the Defensive Player of the Year landscape. And which rookies are vying for hardware? https://t.co/xXVSxH74Fc's analysts predict major awards at midseasonhttps://t.co/Iw5KcEfvlBpic.twitter.com/4BbuYKzsTd

Packers legend Brett Favre spent a day with the 49ers:

"I was a Bears fan growing up but you were the only Packer I liked" - Jimmy Garoppolo to Brett Favre. ♥️

For more exclusive behind-the-scenes footage of Favre's day at Levi's Stadium, check out The Grind on @EPIXHD hosted by @richeisen. Tomorrow at 9 ET #NFLthegrind#49erspic.twitter.com/QtLXxiCtql

That loss to the Chargers just keeps looking worse for coach Mike Nagy and the Bears:

Did Eddy Pineiro want the ball on the left hash for his game-deciding kick Sunday? “Ummmm. I didn’t. But, I mean, it is what it is?”https://t.co/wCSO57zwza