With the 49ers and Saints losing, the road to the NFC championship just got a lot more interesting. LeRoy gives the credit for the Packers’ record to Matt LaFleur. Packers News

Note: The Morning Buzz is taking a long bye weekend off and will resume next week.

We'll start with ESPN's NFL Nation reporters listing a "one-hit wonder" for each team (defined as a player who had one great game or season and never made a big impact in the NFL again). For the Packers, Rob Demovsky chose a former fan favorite:

What happened: Janis had two catches during the entire 2015 regular season before his seven-catch, 145-yard, two-touchdown game in the divisional round of the playoffs at Arizona. It included a 41-yard Hail Mary touchdown to force overtime.

The aftermath: Those who thought it would springboard Janis to a bigger role could not have been more wrong. Janis caught just 13 passes the next two seasons combined, including just two for 12 yards during the entire 2017 campaign. He signed with the Browns the following offseason but never played in another game, for them or anyone else. -- Rob Demovsky 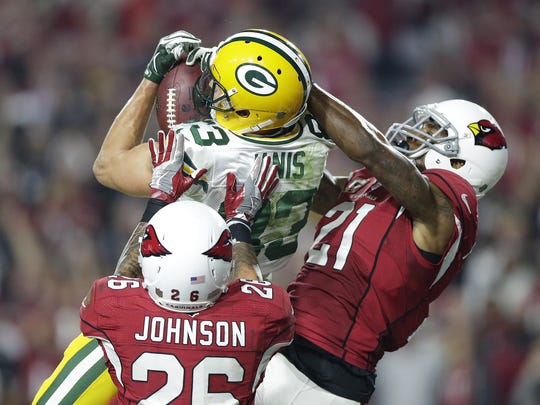 One-hit wonders for all 32 teams: https://t.co/LZclSmHect

Five issues the Packers must overcome to make a deep postseason run, via Rob Reischel of ForbesSports:

Yes, the #Packers are 8-2 and hold the No. 2 seed in the NFC. But here are 5 problem areas that could eventually spell doom.https://t.co/TE4kjvZrJW

Something that no doubt influenced Packers GM Brian Gutekunst's decisions in the 2019 draft:

Some teams punted on the idea of taking a receiver in 2019, or took one later that they would've, because they saw what was coming in 2020. Really good group. https://t.co/mNJYMRKkqr

Davante Adams is the Packers' highest-graded player, according to Pro Football Focus:

While he has battled injuries throughout this season, Adams still enters Week 11 ranked sixth in overall grade (88.0) among NFL wideouts with 200 or more offensive snaps played in 2019. He also ranks fifth in yards per route run (2.67) among receivers with 100 or more routes run on the year.

You can see every team's top-rated player here:

An in-depth look at what transformed the 49ers into the formidable foe the Packers will face a week from Sunday:

This week's SI cover story: Inside how the 49ers—with schematic tweaks to a trendy defense, an update of a classic offense, unique practices and a lot of Nick Bosa—got back on top in the NFL. By @RobertKlemkohttps://t.co/b3GjOXwBTvpic.twitter.com/fE8azHtRse

Did 49ers coach Kyle Shanahan blow it by not settling for a tie in overtime Monday against the Seahawks?

Kyle Shanahan says "everyone in the world" would have been disappointed if he'd played for a tie late in overtime; come Week 17, every 49ers fan in the world may be disappointed that he didn't https://t.co/iyTWsewzbb

In this excerpt from his book "The People's Team: An Illustrated History of the Green Bay Packers," author Mark Beech relates the story of Brett Favre's debut with the Packers:

Book excerpt: Reliving Brett Favre’s debut with the Green Bay Packers, when he entered in the first quarter against the Cincinnati Bengals and led the Packers to a 24-23 victory https://t.co/QPWanrZ9U9pic.twitter.com/P81CGNvEuA

Speaking of Favre, he's all in on Jon Gruden:

Brett Favre has his current pick for Coach of the Year 😯 pic.twitter.com/XbZylCxHSw

Remains to be seen who will be Lions' quarterback in the season finale vs. the Packers:

A true deep dive (but worth your time) into the Bears' process of botching their 2017 quarterback quest and choosing Mitch Trubisky over Patrick Mahomes and Deshaun Watson:

Piecing together the puzzle of the 2017 QB Draft. https://t.co/r5iZvsmcxi