We'll start with ESPN's Bill Barnwell writing that the Packers at some point need to give Aaron Jones more playing time, rather than frequently rotating in Jamaal Williams in part to give Jones a breather. 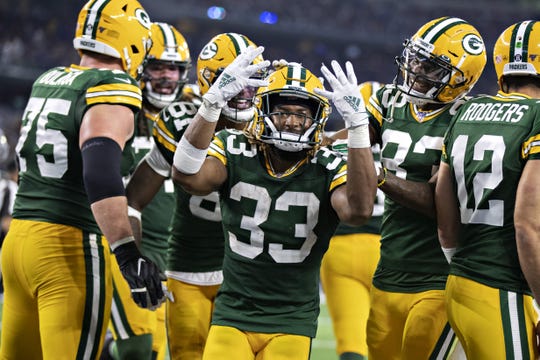 ARLINGTON, TX - OCTOBER 6: Aaron Jones #33 of the Green Bay Packers celebrates after scoring his fourth touchdown during a game against the Dallas Cowboys at AT&T Stadium on October 6, 2019 in Arlington, Texas. (Photo by Wesley Hitt/Getty Images) (Photo: Getty Images)

Barnwell writes (as part of a story on the outlook for all the NFC playoff contenders):

The drop-off in the offense when Jones isn't on the field is dramatic.

In 180 snaps with him on the field and Williams on the sideline, the Packers have averaged 0.22 EPA per play, which would make them the best offense in football on a play-by-play basis. In 127 snaps with Williams on the field and Jones sitting out, though, the Packers have actually been a net negative on offense at -0.05 EPA per play, which is the equivalent of the 2019 Giants, who rank 25th in expected points added. If one back makes you the best offense in football and the other back makes you the Giants, I would go with the first guy.

It's fair to suggest that the Packers are so impressive with Jones on the field in part because they rest him so frequently. In the games in which Williams has been healthy, Jones has played just under 55% of the offensive snaps. If the Packers were to play Jones for 80% or more of their offensive snaps, it's likely that he would be less efficient with the increased usage rate.At the same time, even some drop-off from Jones would still likely produce a more effective offense than that same offense with Williams. As much as the organization has insisted that Jones needs to split time -- a stance that existed before LaFleur was hired -- the Packers are simply a different offense with Jones as the primary back. The Packers' best chance of winning a Super Bowl is by turning the vast majority of the snaps over to Jones when things matter most. The obvious point to make that move might not be the beginning of the postseason; given that it could decide the division, I'd lean toward the Week 16 game at Minnesota.

New column: I broke down the eight-team playoff race in the NFC https://t.co/yBrFZWsqtT

With the Packers’ bye here, this is a good place to give second-year GM Brian Gutekunst credit for the job he’s done, something the coaches there have taken notice of. It’s what he’s done with the high-end capital, of course—free-agent adds such as linebackers Za’Darius Smith and Preston Smith, and first-round picks CB Jaire Alexander and safety Darnell Savage. But it’s also getting guys like OL Elgton Jenkins in the second round. Jenkins’ presence was mammoth when LG Lane Taylor got hurt, and now it’s clear he’s going to have a significant role on the line going forward regardless of who’s healthy and who’s not.

You can read the rest of Breer's column here:

The thing that made Lamar Jackson most proud in the Ravens’ beatdown of the Texans on Sunday? Not beating former ACC QB Deshaun Watson, but Seth Roberts catching his first touchdown of the season.@AlbertBreer on that and more in this week’s MMQB https://t.co/iWIAUDV2M2

The Packers could move into the No. 1 position for playoff seeding with a win at San Francisco, or tumble to No. 3 with a loss:

A win in San Francisco would leave the #Packers flying high, but a loss would drop them into the NFC dogfight that includes the Saints, Vikings, and Seahawks. https://t.co/UbOcddFFbL

NBC is cranking up the Packers-49ers hype machine:

Strap in. This one's got classic written all over it.@packers. @49ers. Sunday night by the Bay. #GBvsSFpic.twitter.com/KEmIa4aPvz

For subscribers: The game reflects his life. https://t.co/uVDvAMQocD

The Green Bay #Packers have 10 current players that will become unrestricted free agents in March, 2020. My ranking of those players is at @ForbesSports.https://t.co/dKMDhGDDZU

Coach Mike Zimmer knows the Vikings have a lot of work to do:

Coach Mike Zimmer said that while he's pleased with the record, he thinks the #Vikings have a long way to go before they starts thinking about postseason success. @SidHartman writes: https://t.co/ictOukqbAS

Rams linebacker Clay Matthews twists the knife after L.A.'s beat-down of the Bears:

- Roquan Smith is back, in a big way

That and much more in 10 Thoughts.https://t.co/VHugXs32Yd

Matthew Stafford’s injury should not provide any cover for Matt Patricia when decisions are made about this regime’s future. My column: https://t.co/ABUfWmM3dI via @freep

And finally ... Aaron Jones and Jamaal Williams team up again:

The other half of the #Packers backfield, Jamaal Williams, joined Aaron Jones on Clubhouse Live. https://t.co/UQZhK5VBOO