We'll start with Packers coach Matt LaFleur arriving late to his postgame news conference Sunday after a 20-15 victory over Washington so he could watch San Francisco win a wild one at New Orleans, 48-46 on a last-second Robbie Gould field goal.

"I was just talking to a bunch of our players," LaFleur said when asked about the 49ers-Saints game. "I may have caught the end of that." 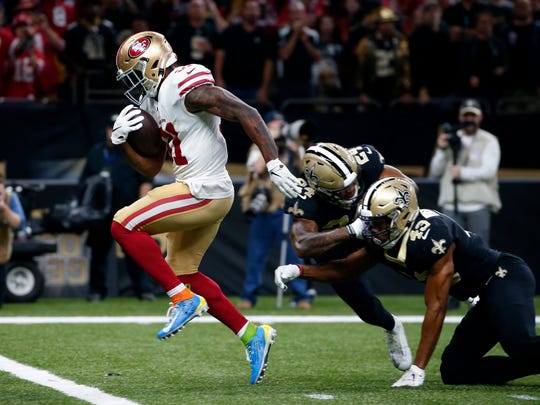 What LaFleur caught was a 49ers team known for its dominant defense that on this day used an explosive offense to outgun the potent Saints.

As Ann Killion of the San Francisco Chronicle writes:

The 49ers have been making statements all season. But perhaps none was as loud at the one they made on Sunday afternoon in the deafening Superdome.

They can beat you with their offense, not just their defense. They have an elite quarterback. They aren’t easily intimidated.

And they can convert a big fourth down on the road when needed.

“That was as cool a game as I’ve been a part of,” head coach Kyle Shanahan said. “The guys just kept battling.”

In a game that surpassed its hype, the 49ers survived a wild shootout, Jimmy Garoppolo outdueled a quarterback legend, Shanahan out-schemed Sean Payton and the 49ers were on the winning side of a 94-point roller-coaster, beating the Saints 48-46.

“You could see it in guys’ eyes — this game meant a lot,” Garoppolo said. “It was a playoff-atmosphere game. I think it will serve us well going forward.”

You can read the entire column here:

. @annkillion: Defense be damned, #49ers offense carries the load in a free-for-all https://t.co/PYvLNcHpUr

Could the Packers match the firepower of either of those teams? LaFleur said they're working on it.

“I mean, I think if we had the answers right now you wouldn’t be seeing what you saw today," LaFleur said of the Packers' erratic offense. "... I don’t think it’s up to our standards. We’ve got to go back, look critically, and make the corrections and make sure we’re putting our guys in good position.”

The Packers admit they're far from perfect, but there's no denying they're a 10-win team, writes Tom Silverstein:

For subscribers: It hasn't necessarily been pretty, but the #Packers continue to get the job done. https://t.co/doLt9nP1NL

Pete Dougherty writes that the Packers need to be doing better now that the calendar has turned to December:

For subscribers: The best teams peak in December, yet the Packers' win on Sunday was as uninspiring as is imaginable. https://t.co/ymMLX9vln4

Aaron Jones produced his highest rushing total of the season. Should the Packers be leaning on him even more?

It might be time to make each game the Aaron Jones show. https://t.co/mQNAxYQRJS

Much like it did early in the season, the Packers' defense took control of this game:

The #Packers' win over Washington felt uneven to many, but there were some positive takeaways for the defense. https://t.co/Z4ALQJYQrj

The Smiths talk about the Packers' progress:

Tyler Ervin made an impact in his first game as Packers' kick returner:

The #Packers may have found a solution to an issue that has plagued them all season. https://t.co/qtHs5Q3agK

Few would have suspected it at the time, but this wound up being the Packers' final touchdown of the day:

.@AaronRodgers12 to Tonyan! @Packers take a two-TD lead in the first quarter. #GoPackGo

Washington quarterback Dwayne Haskins was injured early but stayed in:

Dwayne Haskins said there’s no way he was coming out of the game. #redskinspic.twitter.com/G9VdsYUoMc

Lori Nickel takes you inside the NFL's blue tent:

Packers win and now control their own destiny for a first round bye! Lambeau in January is a special thing! pic.twitter.com/SIX2TZUVL7

Packers kicker Mason Crosby honored his wife and his late sister-in-law by wearing these cleats Sunday as part of the NFL's "My Cause, My Cleats" campaign:

Mason Crosby said this about his cleats after the game: “Molly joked a little bit, too, that it was messed up they put her face on my kicking foot. She said, ‘If you’re kicking a little bit harder than normal, we’re gonna have some problems.’” https://t.co/4mepyeXs2h

Three Packers so far have been named to the NFL 100 All-Time Team:

The Minister of Defense 🙏

Charles Woodson didn't make it, despite a rather impressive resume:

Ryan Tannehill has been lights out since joining the Titans (who loom as another tough test on the Saints' schedule):

And finally: With Josh Sitton and T.J. Lang back in town for the weekend, the Packers enjoyed an offensive line reunion:

Great being back with all the guys for one night . Have a lot of great memories on and off the field with them and its always great to take a trip down memory lane! Oh and @Linsley71 was present but not in this photo. #GoPackGopic.twitter.com/4YGcyGInE0