We'll start with Bill Barnwell of ESPN.com writing about "playoff kryptonite": postseason contenders' biggest weakness and the opponent they should want to avoid. For the Packers, the weakness is opposing teams' pass rushes, and the team they need to avoid comes as no surprise. 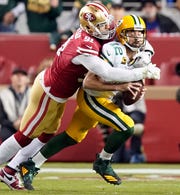 Green Bay's two significant losses this season have come in games where it was torn apart by dominant defensive lines. As I wrote about earlier this year, the Chargers were able to put the Packers' offense into safe mode by moving Joey Bosa and Melvin Ingram inside to go up against the weaker pass-protecting elements of the Packers' line. The Chargers eventually won that game 26-11.

I thought the 49ers might do the same with Bosa's little brother three weeks later, but it turned out they didn't really need Nick to move to the interior. With Bryan Bulaga going down injured in the first quarter, the 49ers were able to harass Rodgers from just about anywhere they wanted. Fred Warner strip-sacked Rodgers on the first third down of the game to hand the 49ers a short field, Tevin Coleman scored on the next play, and a 37-8 rout was on.

Not a surprise, right? Even with Dee Ford sidelined for most of the season, the 49ers can boast three wildly productive pass-rushers in Bosa, DeForest Buckner and former first-round pick Arik Armstead, who has a team-high 10 sacks. A balky hamstring continues to sideline Ford, with the former Chiefs star having played just four defensive snaps since Week 11, but he should be back for a possible postseason rematch between these teams in the divisional round.

One other concern for the Packers that reared its head in the first matchup is that the Packers seem to rely upon scoring early, given how their offense tends to shut down as the game goes along. Perhaps owing to whatever plays Matt LaFleur scripts early in contests, they have averaged 3.4 points per possession on drives starting in the first quarter, the third-best rate in football. On their other drives, they have averaged just 1.9 points per possession, which ranks 16th.

The 49ers haven't had the same sort of splits -- they rank 10th in points allowed per drive on defense in the first quarter and third in the NFL afterward -- but they shut out the Packers on four first-quarter drives when these two teams played and held Rodgers & Co. to just eight points afterward.

New column: I wrote about the 12 teams currently in playoff spots and the matchup they want to avoid on their side of the bracket https://t.co/8vghtUTNNj

Will Vikings star running back Dalvin Cook be able to play against the Packers despite shoulder and chest injuries? Nobody was saying Thursday:

Cook seemed bemused by all the fuss over his status:

Dalvin Cook after facing several questions about his injuries and his status for Monday: “It’s part of the game. It isn’t the end of the world. Y’all know that right?” pic.twitter.com/JjoTnKX3rP

Cook's injury figures to put even more pressure on Vikings quarterback Kirk Cousins, who is 0-8 in his career in Monday Night Football games:

For subscribers: The #Vikings are the second-most run-oriented team in the NFL. https://t.co/cOJMInNNvG

Mike Zimmer, when asked about Kirk Cousins' 0-8 MNF record, had this to say in defense of his QB:

"Kirk has done a great job for us this year. He’s been outstanding, he’s played great all year long. If we get beat on Monday night it’s not going to be because of Kirk Cousins;

Aaron Rodgers cashed in when the Packers clinched a playoff berth, with more bonuses on tap if the Packers win in the postseason:

Cynthia Frelund of NFL.com calculates the percentage chance of each NFC contender earning the No. 1 seed.

Frelund writes of the Packers:

Fun fact: When under pressure over the past two seasons, Aaron Rodgers has thrown zero interceptions and seven touchdown passes, per Next Gen Stats. What's even more predictive of success is that Rodgers has been pressured at the fourth-lowest rate of any quarterback this season (19.6 percent), which is a good thing, because as amazing as that TD-to-INT ratio under pressure is, Rodgers' completion percentage under pressure is only 38.8 this season, fourth-lowest among qualified QBs. On deep passes, however, Rodgers ranks second in the NFL with a 122.7 passer rating (8:0 TD-to-INT ratio). My model loves the upside the Packers defense can provide. Next Gen Stats counts the Packers as pressuring opposing QBs on 32.2 percent of dropbacks (second best in the NFL), with Za'Darius Smith amassing 60 QB pressures this season (second most in NFL). My model adds that measurements show this pressure is the fifth-most disruptive, in terms of the Packers' ability to get within the five-foot halo around opposing QBs.

Jimmy Garoppolo's Niners and Kirk Cousins' Vikings are both currently slotted as wild-card teams -- but one has a strong chance to rise far. @cfrelund ranks all five contenders' chances at landing the NFC's No. 1 seed. https://t.co/Xi3OnJ6Oxhpic.twitter.com/NDZKbBp2As

How will the NFC playoff picture shake out? @WillieMcGinest gives his predictions of the six teams that will make it 👇