Jaire Alexander's offseason work included a study of cornerbacks from around the NFL as well as film on four-time All-Pro Darrelle Revis.

GREEN BAY - Chandon Sullivan was the new guy in early May, signing with the Green Bay Packers after being released by Philadelphia. A second-year corner out of Georgia State with five games of experience with the Eagles under his belt, he sized up his new teammates.

He watched all the cornerbacks on the 90-man roster go through not only drills and practices, but how they moved, what they could do. Each man had a fingerprint that made them unique.

When it came to second-year corner Jaire Alexander, something really caught Sullivan’s eye — beyond just the physical gifts.

“Jaire’s footwork and how good he was laterally — I was like OK, that’s what sets him apart,” Sullivan said.

Especially when it was time to press his man across the line of scrimmage.

“How he’s able to be patient and match a receiver laterally,” Sullivan said. “He’s able to do things like that at the line of scrimmage that not a lot of guys in the league can do. He’s very patient and he’s quick and he’s fast. And that’s what separates him.”

Sullivan noted that Alexander was also the one who had to take the one-on-one drill against Davante Adams. No other Packers corner could get that assignment.

Adams, a two-time Pro Bowler who possesses one of the quickest releases off the line of scrimmage in the NFL, had seen the same thing from Alexander that Sullivan did.

"He’s really patient,” Adams said. “That allows him stay in front of guys a lot. When guys are antsy, that’s when they get beat and they end up in trail positions. So his ability to stay square, stay in front of you and kind of mimic or match your movements, I think that’s a rare thing because — especially younger guys — they want to make plays so bad, they want to jump at everything.”

So how has Alexander developed such patience? 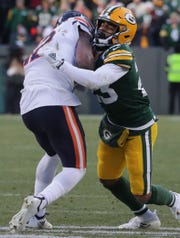 He said he took more of a personal approach to his offseason, which included a focus on technique. That featured a study of cornerbacks from around the league as well as film on four-time All-Pro corner Darrelle Revis.

“That helped shape and fill kind of my game today, just staying patient,” Alexander said. “Last year I was playing corner — I was working my technique but I was really trying to get the plays and figure out what the other team is doing as opposed to really focusing on my craft. Everything was going so fast. It’s just hard to focus on all these things when you first come into the league. This past offseason I was able to really hone in on my craft and personal technique. I got the plays down. I already got that down so that’s one less thing I had to worry about.”

Packers secondary coach Jason Simmons smiles when asked about Alexander’s technical improvements. Talk technique with a coach who also had 10 years of experience playing on the back end of a defense in the league, and he admits it brightens him up a bit.

There are some foundational coaching points for Simmons, beginning with the mantra “stance, leverage and eyes,” but the actual order on the field is to play with the eyes first, then the feet and finally the hands.

“Because if my eyes are moving, then he’s moving, and there’s too much,” Simmons said. “I’m seeing too much. So narrow my vision.”

Simmons said Alexander has improved his footwork. He rarely sees false steps, and Adams said the double-move is increasingly ineffective on the corner.

That strong and patient base then allows Alexander to use his strength to accentuate the leverage he’s playing, whether it be inside, outside or head up.

“I’ve noticed that it is better to go with feet,” Alexander said. “A lot of times people try to shoot their hands first. That works sometimes but you shoot your hands first, you have no feet and you can become off balance. Being able to move your feet is very important. Just matching the intensity of the receiver, you know. When I get my hands on him I’m really trying to get my hands on him. So I’m going to be strong. I don’t know. Maybe it’s the tiny person complex they like to call it, I don’t know, but I don’t believe in none of that first of all.

“But I just feel like it’s in the heart.”

Another tenet for Simmons is that his group cannot guess. Respond to the receiver, not react to him.

And this is where Alexander has proven special.

“Guys are different,” Sullivan said of cornerback technique. “Some guys have patient steps. Some guys inch back. But ‘Ja,’ he’s able to stand still and watch him. And then when he goes this way into his route, that’s his lateral quickness. He’s able to cut you off, get hands on you and now the route is kind of messed up for the quarterback.”

Alexander hasn’t been perfect. The Cowboys' Amari Cooper and the Chargers' Mike Williams had his number with big days in the middle of the season. But for the better part of the season, the 22-year-old corner has been not just steady, but spectacular.

Along with his two interceptions, the 2018 first-round pick out of Louisville has 16 passes defensed, which is tied for fifth in the NFL and two off the league lead.

He effectively shut down Minnesota’s Stefon Diggs, Chicago’s Allen Robinson, Detroit’s Marvin Jones Jr., Washington’s Terry McLaurin and both the Denver and San Francisco iteration of Emmanuel Sanders. And if the ball is caught on him, he’s going to make it a fight.

“It’s been proven to hold true, to be honest,” Alexander said of Simmons’ coaching points. “A lot of times where a lot of people get in trouble is their eyes. Especially at corner, especially like me, an aggressive corner. Sometime the eyes can get you. But if the eyes are in the right place, even at the line in press, if my eyes are in the right place and I’m patient, can’t nobody win.

Alexander is listed at 5 feet, 10 inches and 196 pounds but plays bigger. He ripped the ball out of the hands of Denver tight end Noah Fant after a reception in Week 3. He has two tackles for loss and has become adept at blowing up wide receiver screens.

“It’s more of a want,” Alexander said of disrupting those plays. “You’ve got to want to make that play more than the person who’s trying to block you. That’s kind of how I attack it, you know? I don’t like being blocked. You can see throughout games, receivers don’t try to block me as much. I don’t like that. So it’s just a will to get to the ball.”

That will, the inherent aggressiveness, is now coming together with the technique on the line graph of corner play. And the meeting of those X and Y points is rising ever higher on the chart.

“When you’ve got a guy that has that type of skill set, to be intentional with his movement, now he has a chance to be dominant,” Simmons said.