Sunday will mark Mason Crosby’s first game at Detroit's Ford Field since Oct. 7, 2018, when he missed five kicks in a 31-23 Packers loss.

GREEN BAY - Sunday will mark Mason Crosby’s 26th career game against the Detroit Lions and 13th at Ford Field. But Oct. 7, 2018, will forever stand out. He missed five kicks (four field goals and an extra point) in a 31-23 loss. But with eight seconds left, Packers coach Mike McCarthy ran Crosby out for a 41-yard attempt. He drilled it.

“I just tried to compartmentalize and made sure I went on to the next one and that was the next one,” Crosby said a year ago. “Obviously, it’s good it went in and I didn’t miss it. ... We’ll carry that one forward and move on to the next.”

The “next” started an impressive performance streak.

Crosby didn’t miss another extra point and hit all but two field goals over the final 11 games of 2018.

“I was mentally and physically tired after the season last year but felt very satisfied with the way I turned it around and rebounded from that game,” Crosby said Thursday. “For me it’s one entity, one kick at a time and I do that every day at practice and make sure that every time I step on the field I’m locked in and ready to go.” 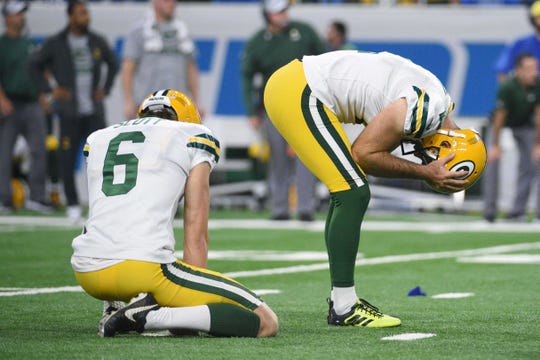 “I think here through this stretch I’ve been really solid,” Crosby said. “I feel those numbers kind of speak for themselves. I’m really happy with our operation and the way we’ve worked about through that. I feel really good going into this one.”

When the Packers lost their third offensive lineman this season to an injury suffered in practice late last week, general manager Brian Gutekunst eschewed his own practice squad and the waiver wire for depth and instead picked up rookie tackle John Leglue off the New Orleans Saints' practice squad.

His flight didn’t arrive in Green Bay until after practice Saturday, but in time for some meetings and the team’s holiday party. Sunday he was en route to Minnesota and Monday he was celebrating a division crown.

“It’s great winning the North this past Monday. Came in at a great time,” the 23-year-old said. “Everything that I’ve done so far that I’ve been here has been great.”

Leglue went undrafted out of Tulane and spent training camp in Denver before being cut. He signed shortly thereafter with the Saints, the team he grew up rooting for as an Alexandria, Louisiana native. The Saints are 12-3 and in position to potentially earn a bye in the postseason, but Leglue said there was no hesitation to jump at the Packers' offer.

“I said it sounds good, just let me know when I fly out,” he said. “The whole goal in playing in the NFL is to be on a 53-man roster. Green Bay giving me this opportunity is just a blessing and I’m happy to be here.”

In college the 6-6, 301-pound Leglue played every position except left guard, though most of his experience is at right tackle and right guard. He remembered the Packers sent scouting staff to the Tulane pro day, but he couldn’t recall if he spoke to the team before or after the draft.

“Any questions I have they’ve helped me out with whatever it may concern based on our scheme,” Leglue said of the short time he has been in meetings. “That’s just basically how the o-line room is from what I can tell so far. It’s a tight-knit group. Literally, they’re going to help me out, go the extra 10 yards to help me out in anything I need. Also, everybody else is there for one another.”

If running back Jamaal Williams (shoulder) can’t play Sunday, expect fullback Danny Vitale and rookie Dexter Williams to pick up the slack. Williams was listed as not practicing Thursday, even though the Packers elected to do walkthroughs instead of practicing.

Another option would be Tyler Ervin, the club’s punt and kickoff returner, whose official position is running back. Ervin was used against Minnesota but as a wide receiver running a jet motion behind the line of scrimmage.

Ervin was claimed off waivers from Jacksonville on Dec. 3, primarily to replace Tremon Smith as the club’s returner. Through four seasons in the NFL, Ervin has just five carries, his last on Sept. 24, 2017, when he was a member of the Houston Texans.

“We’ve been implementing Tyler into the plan more and more,” Packers coach Matt LaFleur said. “You saw him out for a couple plays last week. He’s a dynamic playmaker.

“But certainly we have other guys there as well, (like) Dexter and Danny, to help carry that load. So, if we get into that situation, we’ll go that way.”

Vitale has carried once for 3 yards this season and Dexter Williams, who has been active for only three games, has 2 yards on three carries in mop-up time. LaFleur probably doesn’t want to overuse Aaron Jones in the regular-season finale, so even if Jamaal Williams is active, don’t be surprised if Dexter Williams is, too.

LaFleur did not have much to say when asked about the postgame handshake he had with Minnesota coach Mike Zimmer on Monday night.

Several memes on Twitter showed Zimmer turned around the other direction while grasping LaFleur’s hand, making it look like the Zimmer just reached out a hand without looking at LaFleur. Replays showed Zimmer was facing LaFleur when he reached out, but he turned away as soon as their hands met. The still shot made it look like LaFleur was caught off-guard by Zimmer’s quick turnabout.

“I haven’t even thought about it at all, to be honest with you,” LaFleur said. “It is what it is. It’s a competitive game, and I’ll leave it at that.”